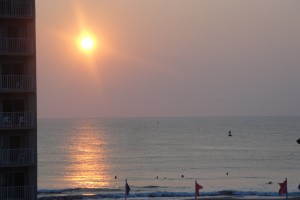 I was driving around the other day running a few errands and when I got back to my car I caught the tail end of a some random preacher speaking about the proper role of women in The Kingdom on local Christian radio. I didn’t catch his name or the name of his ministry or sponsor but his message was loud and clear and made my blood boil. Bulls eye. Trigger hit. Buttons pushed.

I had to wonder how she’s come to limiting her own scope as an adult at that young age. I thought it was rather sad that his daughter said she was going to grow up to teach gymnastics instead of saying she dreamed of being an Olympic gymnast or of winning this or that gym meet. She simply wanted to teach her passion. She didn’t dare expand her dreams to include anything like actually being in competition as a gymnast. Her own goals were limited in scope to start with.

It was pretty obvious she wasn’t going to receive the same type of nurturing or encouragement the average ‘worldly’ or ‘atheist’ parent might give their offspring. Her passion and talent would never receive the type of acknowledgment and respect it might elsewhere. It’s hard to develop to the best of your talent without the emotional support of those closest to you. I suspect that is why this child could not see any further than teaching one day.

Not that there’s anything wrong with wanting to teach. But most of the people I’ve known that have a great passion for something and end up teaching do it much later on as adults, they don’t envision it as a kid. My friend that teaches sewing started out designing and sewing professionally, not dreaming of a future teaching. I can tell you the first twenty years I painted I never once thought of teaching, passing on my knowledge to others until I reached middle age. Now I teach the occasional art class and I still create on a regular basis. It blows my mind that the only way this child can see her future involving her passion is by channeling it into teaching.

Random Preacher stated in a very proud voice how he reminded his daughter that gymnastics teacher was a worthy profession, at least until she took on her real God-given honorable profession as wife and mother, at which time she’d have to give up gymnastics altogether.  Her ‘real’ profession. Like being a gymnastics teacher isn’t a real profession?

I forgot even what the niggling details of his sermonette actually were because I could not get over the audacity of this strange man decreeing that his daughter’s future was one of such a limited scope, limited by the restrictions he imposes based upon his own personal interpretation of a book written long ago and transcribed many times. I’m so saddened for that poor child, not allowed to decide for herself what her role will be years from now, her future as mapped out as that of any lifer in prison.

Her father started pontificating on the role of the Proverbs 31 woman and how our society is all screwed up because women don’t know their ‘place’, don’t live that Proverbs 31 life of waiting on husband and kids hand and foot.

I don’t know what version of the Bible this guy was reading but in mine the woman described in Proverbs 31 as a righteous woman wasn’t sitting around trembling waiting on her lord and master. This was a woman in charge of her life in significant ways. She supervised others in her household, she bought and sold, she didn’t stop every two seconds to ask her husband what he wanted for dinner or if she should do this or that. She understood her value, her worth and her role as self confident and freely able to do what was right for those in her care and for the family. Seemed to me that she occupied a role of almost equality with her husband, like a partner, working at those things she had talent for. Not a slave, not a servant by any means.

Yet most Fundegelical people will tell you that a true righteous Christian woman never works outside of the home, never has servants, never moves or does a damn thing without the man’s approval. Looks way different to me than what Proverbs 31 outlines. How can that be?

This one man’s words rubbed me the wrong way in light of recent attempts by those in government influenced by the Religious Right that are doing everything in their power to erase the rights of women, to take us back to a time when women were considered chattel and incapable of making decisions concerning their own lives. If they are successful we’ll be inching ever closer to the world Margaret Atwood imagined in her novel “A Handmaiden’s Tale”  This trend of political attacks on women frightens me more than any preacher screaming about heaven and hell.

I think if most women, Christian or not, acted with honor and self confidence at the things put before them as their lot, be it raising kids or working at a job, this world would be a better place. And yeah, there should be room for those things you have a passion for. Life without passion isn’t worth much. I hope that poor kid realizes that truth and has a chance to live her passion without a bunch of knuckleheads telling her no.

Calulu lives near Washington DC , was raised Catholic in South Louisiana before falling in with a bunch of fallen Catholics whom had formed their own part Fundamentalist, part Evangelical church. After fifteen uncomfortable years drinking that Koolaid she left nearly 6 years ago.  Her blog is Calulu – Roadkill on the Internet Superhighway

March 22, 2012
Homeschooled Girls and Trash Cans: The Social Isolation of Homeschooling
Next Post