Karma Will Run Over Your Dogma & Squash It

Karma Will Run Over Your Dogma & Squash It April 27, 2012 Guest Contributor 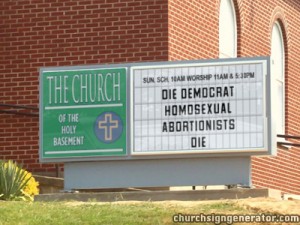 (Editorial note: What follows below is my own personal thoughts on this, no one elses, I’m not speaking for the group, just me. I cannot stay silent to this. If you’re offended or triggered I’m so sorry. Warning if you are triggered by scriptures or the like.)

This morning several of us at NLQ were directed to look at “Women’s Prayer Group Praying That the Women at MRFF All Get Incurable Breast Cancer”  posting on  Free Thought Blogs.

Apparently there is a group of ladies calling themselves Christians who’ve decided to make praying for the death of anyone connected with the Military Religious Freedom Foundation their number one priority. And why is that? Perhaps because the MRFF is a watchdog organization that keeps the the Dominionist evangelical Christians in the military from discriminating, harassing or intimidating people that believe or don’t believe differently than them. Yes, the MRFF protects the religious FREEDOM our country was founded upon. Oh how very evil!

When I first read through it my immediate response was what the hell? What. The. Hell. Is. This … well you know the word. I felt like going all nasty dung-throwing rantiness on it. But I get the sense that’s sort of what they’re looking for so that this group can justify their own nastiness with a ‘See, see how EVIL they are!!!’. I wanted to throw up my hands and shout “WTF!”

I have to laugh and agree with both Chris Rodda on Free Thought Blogs and Leah Burton of POLITICUSUSA about how completely UNChristian these women are. I also want to know if in the eyes of the Lord does spelling count when issuing imprecatory death prayers. They’ve been sending around an email spelling out the names of people they are praying to be stricken with breast cancer along with some very, um, interesting spelling. Below is the email:

“Mickey Wienstien, we called you on the weekend to advice you that our womens prayer circle at our church will be ending your wickedness against Christ Jesus and his anointed of the USA in our military. In America which is Jesus’ country we can pray all we want for anything we want. you hung up on us and were rude to our leader. but will that stop us or Christ Jesus? No it will not and never could have, wicked Mickey. Our prayer circle has never failed to acheive our hosts granting of the scripture we pray. for direct intervention against you as you are a true demon to America. Luke 9:1 We will not stop our prayers until you stop the evil you do with Lucifer on a daly basis. Luke 9:1 But not against you Mickey. We know by your internet site and your book who it is to be. Now for our prayer, we pray that the women who work in your MFRR and the women in your family will befall fast moving breast cancer which can not everbe cured. We pray this for Leah Bruton, and Becki Miller, Patricia Corigan, Chris Rodda, Edie Disler, Vicky Garrison, Kristin Leslie, Melinda Moeton and Joan Slish. And you evil clan too, we pray this for Bonnie Wiensten and Amanda and Amber Wienstein and the woman lawyers Cariline Mitchel and Katherin Ritchy and all women of all who work at with for Military Freedom Against Religon Foundation. know that we pray and pray hard all the days until you stop your destruction of our American army and accept Christ Jesus as Lord and join His army.”

Guess none of them ever read Luke 6:27 through 36 or they’d know that you’re supposed to bless your enemies, pray for them and do good to them. Or are they just ignoring that part of Luke because it doesn’t line up with their personal agenda? You cannot have it both ways, either you love the Lord and seek to keep His word or you aren’t really Christians because you don’t even follow what you say you believe.

Also, Luke 9:1 that they cite in their email has nothing to do with Lucifer or their prayer circle or America. What is says “When Jesus had called the Twelve together, he gave them power and authority to drive out all demons and to cure diseases,” I seriously doubt any of them are part of the Twelve. Driving out demons and curing diseases is also very diametrically opposed to praying for disease to kill someone. It’s emotional murder, harboring the spirit of murder as surely as pointing a gun and pulling the trigger. The desire is there.

Actually the only real thing that their email does expose is the condition of their hearts, that they don’t have love in their hearts, that they’ve chosen curses instead of blessings. Chose today, blessings or curses. Pretty easy to see what they’ve chosen. I’d be curious to see what the outcome in their own lives will be in six months or a year as a result of their choice to curse. One of the things I’ve learned in my years as believer and before that, be very careful what you wish on other people because the universal law of reciprocity tends to bring that thing you’re wishing on others straight back to you. When you pray for judgement on others or bad things then you’re telling the universe or God that it’s alright with you to release the same thing on you. It never ends well. Better to forgive, forget and live in peace, move on. Or you might find yourself eating a rubber biscuit. The kind you throw at someone else to hurt them, it bounces off the wall and lands right in your big old trap to poison you.

Karma can be a big old nasty bitch. I’m almost afraid for these ladies because what they’ve released in the spiritual realm can’t be a good thing. Look what happened when someone cursed King David in the Psalms 109:28 “Let them curse, but You bless; When they arise, let them be ashamed, But let Your servant rejoice” David knew enough of who he was and who the Lord is that he asked God to bless him and to outdo the curse and then turned the curse back on those that uttered it.

I remember back when I was working for a big computer company in the Virginia Technology Corridor I came to work one day just in time to see people huddled fearfully in groups here and there in the parking lot. Spray painted on the side of the building were upside down crosses, 666 and the words “Satin Rules”! Someone had thoughtfully placed a big black Hefty bag filled with dead chickens on the main door step, right smack dab on the welcome mat. Several of my coworkers were shaken up by all of this because dead chickens left on the steps of a building are a curse of death on the occupants in black arts and voodoo. One lady started crying, refusing to enter the building, thinking she was going to die. I had to point out to her that it was likely it was just one of our loonier disgruntled former coworkers that did this and that they couldn’t be much of a Satan worshiper if they couldn’t even be bothered to spell their master’s name right. It was strictly a tactic to make people fearful and fall into a self-fulfilling prophesy.

This is just more of that I think. Silly ecclesiastical posturing in an attempt to sow fear.

To those praying for death I have only to say chose carefully, blessings or curses this day. I would hope you’d chose blessings.

PS. Reminds me of this song

April 27, 2012
Answering the Quiverfull Party Line #1: If We're Not Trusting God, We Are Playing God
Next Post