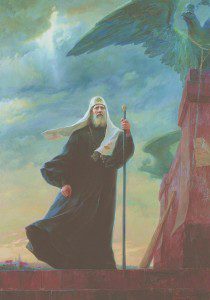 I hated the the underlying spirit which had crept into our marriage; it was a peevish, disapproving air that my husband had taken on. In our “heathen” days my husband had a happy go lucky air. This was endearing and made up for the fact that he could be irresponsible.

Under Christian patriarchy this changed. Not only was he now “head of the household”, but he was responsible for making sure that we lived a “Godly life”. This permeated every bit of our life as we didn’t want to be “Sunday Only” Christians; God was not someone that we turned our back on for the other six days of the week.

This affected how I dressed, what we ate, what entertainment we watched or listened to. Many of these changes I agreed with. Sometimes, even when we differed, my husband stood back and let my own convictions work within me. or instance, he stopped listening to Rock months before I did. Only once, did he drop a mild hint about it “being the way of the heathens”, I continued to listen to rock with no objections. Then one day, I felt “led by the Spirit” to get rid of all of my rock tapes.

However, there were other issues in which he clashed at first; the dress issue as I have mentioned before. Most of the time, I would give in, I didn’t want to be a hypocrite, only living by the Biblical rules that appealed to me. Like my fellow posters on the forum, I went into this with good intentions, seeking to please God.

However, I still found myself driven to tears on occasion. Usually it was after a disagreement, or a rebuke. It was then as I that I would think how cruel it was; from the sniping that women in our circles endured, the countless little rules that wives had to follow, but most of all, how my husband had gone from being my partner to a task master. Not in a literal sense as some Patriarchs do, the daily to-do list and all, no it was a change in our marriage dynamic. Where before I had had a partner, now I had someone that I had to please. Worse, since this order supposedly emanated from God, by pleasing my husband, I was pleasing God. This made it easy for my husband to rebuke me in public, to insist on new rules, to disregard my opinion. In short, Patriarchy short circuited any empathy that my husband might have for me.

This was perhaps one of the most damaging effects of the Patriarchal belief system on marriages in general. Whereas husbands normally are supposed to consider the feelings and desires of their wives, would be patriarchs are taught to disregard the such things. Husbands warned against “giving in” to their wives. For the patriarchal crowd, a contrary opinion on the part of the wife is yet another attempt to usurp her husband’s authority.

Stuck between such a mentality,one that went against my better senses (not to mention upbringing) I was now embracing, I could not do much except silently mourn the passing of my once sweet husband as he transformed himself into a patriarch.

Still, I pressed on, despite my misgivings….

May 31, 2012 Snipped! Part 5 Theoretical Visitation
Recent Comments
21 Comments | Leave a Comment
Browse Our Archives
get the latest from
Nonreligious
Sign up for our newsletter
POPULAR AT PATHEOS Nonreligious
1