Who Was That Masked Man? Part 4 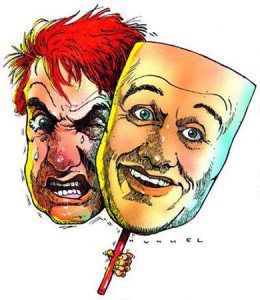 When we last left this story every couple in our little circle of friends from church had been exposed as having at least one cheater.  Things don’t get any better

Months pass , everything, everyone continues in a warped state of stalemate. Tom has been dumped by Alice but doesn’t come home to Tina. He moves on to a series of girlfriends picked up in karaoke bars after he starts spending all his night time hours at karaoke. He starts drinking heavily before moving on to smoking reefer. All the while singing really bad songs from the early and mid 60s every night at the local karaoke bars.

Tina serenely states that he will come home eventually. It’s in God’s hands. The former counselor in me comes out and I urge her to file for disability because of her overwhelming health problems. By now her muscle disease has progressed to the point where she’s having trouble walking and standing. I try to talk to her about filing for Aid To Dependent Children and Foodstamps as well. She also qualifies for housing. Nothing doing. Tom will be back, she insists. God always brings him back. She just has to trust in the Lord.

Their oldest boy, David, is in his teens, severely retarded and almost impossible to handle since he’s taller than his mother and is much much stronger than her. It’s like dealing with a six foot two inch toddler. He smashes out windows, routinely breaks things and trashes the house. I suggest to Tina that perhaps she can get assistance for David through the local social services, at least get funding for her to have an aide stop by to give her a break, perhaps even see about putting him in a program or facility that will work with him on development. She rejects that, just like she has rejected all the suggestions of the school system that David be medicated to help deal with his behavior in class.

But in the meantime Tom is lackadaisical about paying their bills plus he barely works his own business, which also declines in revenue. Somehow he gets a low interest loan to buy a small house while leaving Tina and the four boys in their rental house. So he buys the house, buys all new furniture and continues maxing out their credit cards.

During this time Tom’s sister in law tells me that not only did he do this wife and family abandonment to run around during his marriage thing in the past but most of the times he did that he would dump his family with them. Tina and the boys would live in the brother and sister in laws basement, no money, no nothing, so Tom paying some of Tina’s rent while he’s on this bender is a ‘step in the right direction’

My husband and I wear ourselves out trying to help Tina and appealing to Tom with no results. Tina refuses to consider any action or alternative at all. She’ll sit and wait for her beloved to return once God melts his heart. Tom is coming home and they will be happy again. The pastor talks to her, we talk to her, people concerned for her well being from the church and social services try to talk to Tina but she is in ‘true believer’ mode. God hates divorce, she spits out, ALL divorce, while we all try to tell her what she has isn’t really a marriage, more a servitude to an abusive irresponsible tyrant.

While I admire Tina’s unshakable faith and ability to cope with what seems like to me one of the most unacceptable situations imaginable I cannot help but wonder if she’s also mentally ill. Who puts up with that type of public rejection by their spouse yet seems not to harbor any discernible anger at all? I realize I’m dealing with something that I probably cannot help at all regardless of my desire to ‘fix things’ Fixing things is something I’ve always been good at but this is beyond my skills.

Finally after over a year we wash our hands of the situation. The church is helping Tina buy groceries and Tom’s family is helping out with the utilities. Tina is still deluded into thinking he’ll be back. I back off my friendship with her because it’s just too draining on my emotions. Her emotional neediness without any attempt to help herself is seriously bumming me out. I have to have space from her.

People from the church that have been cordial enough but not the most friendly start approaching me to ask me how on earth I could tolerate being around Tom, Mr. Self-Righteous Man and his wife. Turns out most everyone at our church just barely tolerates him, mostly because of Tina and it’s his pattern to immediately latch onto the newest members in an attempt to have best friends. Most of the women talk about how ‘creepy’ in a sexual context he comes across as. I’d never picked up on that in the past.

Then Valentines Day comes. I’d been sick with a bout of pneumonia since the holidays and that day was the first day I felt strong enough to do much beyond the basics. I decorated the house, made a cake and a special meal and we waited for my husband to come home. All four of us were just sitting down to our dinner when the phone rang. It was Tina.

While the shrimp and asparagus got cold she yammered on and on. Tina was hysterical. She had just received a call from a gas station at a nearby bigger city. Tom had been there earlier in the evening, filled up his car. His credit cards were rejected so he tried to write a check for the gas. The electronic check verification declined his check. He told them he’d be back with cash when he got around to it and drove off. They looked him up in the phone book and got Tina. Tina was demanding that I or my husband pick her up, drive her to the gas station so she could make arrangements to pay for the gas, or perhaps we could lend her that amount. The phone call went on for over an hour.

The kids and I sat there and waited for awhile before realizing that there was no dealing with this brand of crazy. We ate. I was so completely pissed off that here Tom was ruining another evening for us. Finally Hubby got off the phone and filled me in. I was even more furious because he decided to go over to Tina’s regardless of my opinion. He said he felt very sorry for her.

Hubby came home several hours later to tell me he’d told Tina that Tom must suffer the consequences of his actions so he would not be taking her to pay for Tom’s gas. After being talked around in circles with Tina blindly refusing all offers of help or suggestions because God’s going to cause Tom to come home my husband concludes I’m right, we need to completely back off and allow them to stay in their own deluded little screwed up world. This is their mess, our attempts aren’t helping, let them be.

Weeks past and Tom’s name keeps popping up in the local arrest records of our town newspaper. DUI, bad checks, and drug charges. After that my daughter from my previous marriage comes home one night shaken up and tells me that Tom tried to put the moves on her at the local bar. My husband in particular is extremely offended and decides to try and talk to Tom.

I hear through the grapevine that Tom has taken up sky diving that summer, even showing up at his brother’s beach house at Sea Isle City, New Jersey every weekend that summer. Once he arrived with the kids and Tina, telling his brother and sister in law that he had promised them a vacation. That ‘vacation’ consisted of Tom staying completely away from the beach house all week while stranding Tina and the boys there with zero money, no car, no food.. well you get the picture. Tom bar hops, beds bimbos, eats out and sky dives by putting it all on his bloated credit cards while his brother feeds his kids and estranged wife.

This gives Tina hope that they are going to get back together because he took them along on his week long vacation, never mind that he didn’t spend literally any time outside of the car with them. She starts praising God, saying He’s beginning to melt Tom’s heart towards her.

May 26, 2012 Update: Lori Wick, Christian Author Involved in Child Abuse Probe
Recent Comments
7 Comments | Leave a Comment
Browse Our Archives
get the latest from
Nonreligious
Sign up for our newsletter
POPULAR AT PATHEOS Nonreligious
1