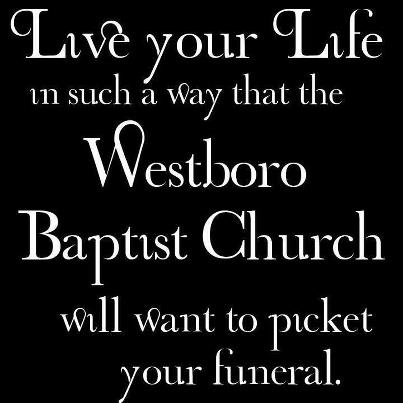 I just came across this graphic on Facebook. We recently had someone from Westboro Baptist Church post a hate-filled, bible-thumping comment on No Longer Quivering – guess we must be doing something right to have attracted WBC’s attention. (◕‿◕✿)

Dane County Judge Maryann Sumi sentenced Pastor Philip Caminiti to 2 years in prison for preaching the standard of God Almighty as spelled out in the scriptures. This unjust judge swung her judicial gavel at God and the clear teachings of the Bible on how to love one’s children: “He that spareth his rod hateth his son: but he that loveth him chasteneth him betimes.” (Proverbs 13:24). Judge Sumi called it conspiracy to commit child abuse. God calls it loving your child. Judge Sumi doesn’t get to overrule the God who created her.

The command from God is “in righteousness shalt thou judge thy neighbour.” (Leviticus 19:15) Judge Sumi has perversely judged God. God Almighty has a bigger gavel & it will fall on the heads of all Wisconsinites for her egregious error. The people of Wisconsin need to make their voice of opposition heard against this judge & crooked Assistant District Attorney Shelly Rusch (who asked for 5 years in prison for Caminiti).

In this decision, Judge Sumi quashed the First Amendment (freedom of speech & religion) – the crowning jewel of our constitution: the selfsame constitution she swore an oath to God to uphold. Shame on Judge Maryann Sumi. She clearly wasn’t spanked enough as a child.

Governor Scott Walker should stand up and pardon Pastor Philip Caminiti. He should publicly chide Judge Sumi for her flagrant trampling of the First Amendment. Westboro Baptist Church will reiterate this position when we picket this judge and the Wisconsin State Capitol in the near future.

At first, I wasn’t sure that the comment was for real, so I tagged my Facebook friend, Nathan Phelps – son of WBC pastor Fred Phelps to ask if the comment was from an actual WBC member. Here is Nate’s response:

It’s my niece. It chills my blood to hear this nonsense coming from a third generation. They are so myopically committed to the dogma and rhetoric of my father, they are incapable of seeing the brutal inhumanity of their position OR the utter lack of historical evidence that even pretends to support their position.

I didn’t realize you came from that system Vyckie. I would love to know your story. But I don’t need to know the details to say thank you for having the courage and love to walk away. I know how hard it is, but I also know that you radically, permanently altered the trajectory of your children’s lives. The psychological and emotional harm you shielded them from will reverberate down through the generations.

This is where the real difference is made in the struggle against abusive religious ideas, having the wisdom and courage to take children out of harms way. Everything else is just editorial.

As survivors of spiritual abuse, No Longer Quivering is sounding the alarm about the dangers of fundamentalism – by sharing our stories and blogging about our progress out of that narrow worldview, we intend to continue supporting our fellow survivors along the path to freedom from hate and fear-based religion.

June 13, 2012
SASBN Blogging Tips: Should I use my real name, or blog anonymously, when writing about spiritual abuse?
Next Post