I have to admit. I too, just like Sierra, have a problem with Michelle Duggar and her recent comments on the beach and clothing that doesn’t fall into the realm of her idea of modesty.

These are the only Duggar-approved swimwear available. You might as well be wearing a burkini, at least the burkini is more attractive and modest than these things. 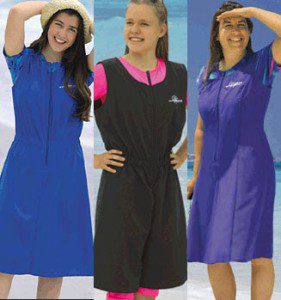 Doesn’t everyone want to look like a school cafeteria lady at the beach?

Here’s my rant about it. I never made it to the intellectual depths that Sierra did on the long term repercussions for the Duggar children. It struck me as more of the ‘Sex on the brain’ syndrome that certain strains of fundamentalism seems to dwell on.

After reading this about the Duggars yesterday I’d just about reached a boiling point. The whole modesty issue is so twisted by the right wing and the fundamentalists in this nation. The Duggars seem to sum up the more conservative views on dress and appropriateness. Which goes beyond ridiculousness, or at least it seems that way to me on a day when the temps here are going to go triple digit.

Now, I’m not advocating running to the Super K Mart in booty shorts and pasties over your ta-tas, even if it’s tempting on a day like today. Use some discretion when you dress and dress for the occasion, your body and the weather. Nothing about Fundie Dress 101 takes any of those factors into consideration. It’s all about not tempting some poor weak-minded male into not having a boner after viewing your knees and being reminded you have breasts. Potato sacks of varying degrees lest you reveal the shape of your God-given body.

I notice that Michelle Duggar has a new fundy buzzword to use when discussing going to the beach and modest clothing – Defraud. The way she uses it is if you get someone else sexually excited via your lack of clothing and you’re obviously not going to do the nasty with them in a righteous way then you have defrauded them. Personally I think she’s seriously misusing the word, but then again much of the word secret handshake fundamentalist usage is misuse. So what does Webster’s give as a definition of ‘Defraud’?

to deprive of something by deception or fraud

It is a stretch to say that luring a guy into lust by your clothing is defrauding him.

Another thing that just pisses me off about patriarchy is that there is no responsibility for the male. All the onus for lust is put on something done by a female as if males are little weaklings that cannot control their own urges and lusts or minds. It reduces men to little more than rutting animals, to lesser beings and is one of the most insulting towards their sex misconceptions held by the conservative arm of the church.

Knees are not breasts and men can control how they react to possible sexual triggers in public.

I pity the Duggar gals this week with the widespread heatwave throughout much of the US, bringing triple digit heat. There’s no way I would be wearing sleeves or long skirts in those temps.

One of those things that I’ve carried out of my old church are buzzwords the church uses regularly that don’ t quite mean what they think they actually mean. Like this ‘Defraud’. Our old pastor used to use paradigm all the time out of context,  as if it was the action of shifting your view or theology, instead of the theological framework. It used to drive me crazy along with other frequently bandied about misuses of other words. I have noticed that this whole misuse of words or buzzwords is common in the patriarchal fundamentalist church and am interested in what ones you’ve heard. I’d like to comply a list of those words they harp upon and use over and over incorrectly so I’m hoping you will list in the comments those words you’d heard that fit this paradigm. I want to create a page here in NLQ that will list words that if you hear over and over in your church you should run fast and far away.

July 1, 2012
The Duggar Family Doesn’t Go to the Beach, and Why That’s Bad for Their Kids
Next Post

July 3, 2012 NLQ Featured Writer: Wandering One
Recent Comments
18 Comments | Leave a Comment
Browse Our Archives
get the latest from
Nonreligious
Sign up for our newsletter
POPULAR AT PATHEOS Nonreligious
1 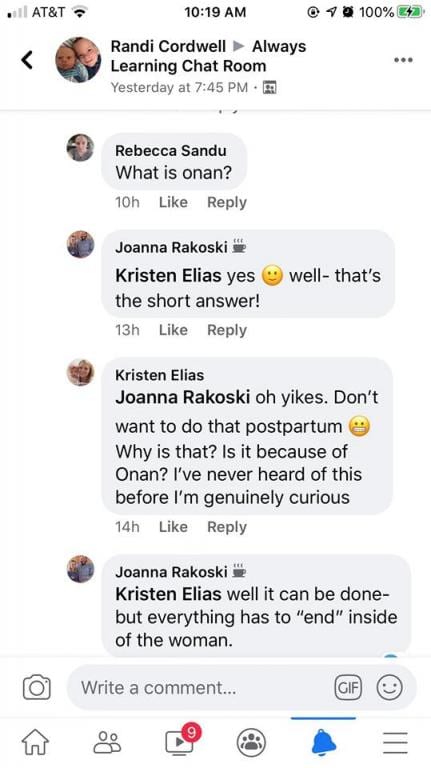