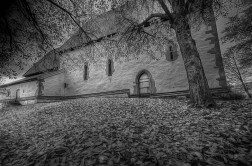 The new building had not materialized. The way that things were going, their might not be enough funds to acquire the building. Even so, our pastor continued on with his vision of a new church. I got the sense that even if it he had to go back to having church at home, he was going to create a new organization.

It was at this point that we noticed something; my husband was no longer our pastor’s confidant. Sure, our pastor would be friendly with my husband and if asked, he would discuss the new church with my husband. However, when the new building became available, he asked several other of the men to accompany him to the new building to see what they thought of it. My husband didn’t even know of the trip until it had already happened. Our pastor no longer met with my husband or called him to discuss the new church or his changing views. He still did this with the other men in our close circle of friends and even with some of the newer members. It was as if my husband was no longer longer a confidant. This pattern repeated itself over and over again. After service, we would hang out and while our pastor would talk to us, it was no longer the super long conversations which lasted for hours. Now it was a shorter polite talk. While he never excluded my husband from conversations, our pastor no longer pulled him aside to discuss things. It was almost as if he was going through the motions of being a friend.

Then came the written by laws and guidelines for the new church. Our pastor gave them out to everyone, explaining that these were for the new church that he was going to have. While not written in stone, the document would give people an idea of what the new church would be like I noticed several things immediately.

The first was that while everyone was welcome to attend services, it did not automatically make one a member of the church.To be a member of the church meant attending not only Sunday services, but going to a midweek one as well. the language of the guidelines stressed active fellowship with other members; church wasn’t confined to a weekly service, but continued through the week. church wasn’t strictly church so to speak, but a gathering and fellowship of the Saints.

There were other rules and statement. Most were akin to what we were already doing. I got the feeling that our pastor wanted members to be active and dedicated. I remember in the past that he had read and like the book “The Purpose Driven Church”. He had given my husband a copy the previous year. I saw it’s influence in the new bylaws.
My husband and I were not happy about the increased number of services, it was already going to be a longer commute and on top of that, a midweek service as well as other church functions.

However, the biggest surprise came when my husband read the section concerning elders of the church….

Distant tribe thought Philip was a 'god'. Media...
I GOT an email today from a friend saying 'Spain's the right...
view all Nonreligious blogs
What Are Your Thoughts?leave a comment
Copyright 2008-2021, Patheos. All rights reserved.