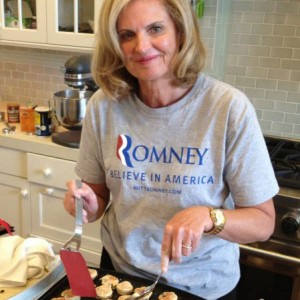 Ann Romney cooking – you know, like she has to. Because she’s a lady.

Credit isn’t all it’s cracked up to be.

Before I go any further, I want to promote an excellent article by Mark Greene at MegaSAHD that challenges the ugly view of masculinity and the outdated, Leave-it-to-Beaver family structure that Ann Romney took for granted in yesterday’s RNC speech. He’s absolutely right: men are capable of so much more than they appear in the Romney model, and they are everyday proving her wrong.

Here’s a snippet from her speech:

You (moms) are the ones that have to do a little bit more and you know what it is like to earn a little bit harder earn the respect you deserve at work and then you come home to help with the book report just because it has to be done. You know what those late-night phone calls with an elderly parent are like, and those long weekend drives just to see how they’re doing.

You know the fastest route to the local emergency room and which doctors actually answers the phone call when you call at night, and by the way, I know all about that.

You know what it is like to sit in that graduation ceremony and wonder how it was that so many long days turned into years that went by so quickly.  You are the best of America…You are the hope of America.  There would not be an America without you.  Tonight, we salute you and sing your praises!

The gist of her speech is that women make America by making babies and looking after those babies while the useless baby daddies are busy at the office doing nothing of particular value. Convoluted? Yes. Stereotypical? Horribly. Revealing? I think so.

In my fundamentalist church and my extended family (Italian Catholic), there was an implicit matriarchy that undergirded the patriarchal exterior. Women were the ones sustaining the family network (in the first example) and the church network (in the second). Despite the fact that they relied exclusively on their husbands for financial support, they were the ones who made the social rounds that connected them to family, friends, neighbors, teachers, babysitters, local business owners, etc. In Christian patriarchy, substitute homeschool conventions and Bible studies and large Christian conferences for the teachers and (gasp!) babysitters. This is not news to anybody; if I had a nickel for every time somebody told me women have “the real power” because they have more responsibilities, I’d be able to support the whole extended family myself.

There is a difference, however, between responsibility or necessity and real power. Anyone who’s worked as a graduate student or middle manager or child care supervisor knows what it feels like to have all the responsibility and none of the decision-making autonomy. A multiplicity of small choices (what to cook for dinner, where to go on vacation, what to do about the car repair bill) does not add up to the same amount of power inherent in a few large choices (where to live, how many hours to work, what salary to accept, how many children to have). Thus, while the women of Christian patriarchy will joke amongst themselves about the helplessness of their husbands and how they are really the ones who keep it all together, it’s a joke that casts a shiny veneer over the uglier truth: that they are staff in their own households, and that if they stopped keeping it all together they would be replaceable.

But the joke isn’t just a source of levity: it’s a bargaining chip.

“I will do all this,” Ann Romney’s hypothetical American Mother says, “as long as you acknowledge me. I want due credit and thanks, publicly.” 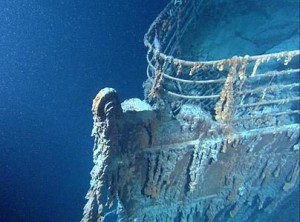 In other words, this mythical American Mother has fallen for the chivalric myth of “women and children first”. As Libby Anne points out, not only was “women and children first” a policy that had little life outside of the sinking of the Titanic, and even then was enforced at gunpoint rather than by a natural nobility on the part of the good, historical, chivalrous male passengers that Doug Phillips, Vision Forum and the rest of the Christian patriarchy universe like to imagine. Libby writes:

When I was a teen, I was fed the “women and children first” line along with “you don’t have to sign up for the draft!” as reasons not to demand equality with men. I was constantly assured that I was equal in the “big picture,” or in “God’s eyes,” or that Adam and Eve were equal before the fall and thus our souls were equal after redemption but we live in a fallen world so… yeah. It was convoluted. It was pretty darn unsatisfying, too. What good is being metaphysically equal when you have to live your life in servitude? When you can’t govern your own life in any meaningful way?

Nobody knew what to do with me when I said, “I’d rather register for the draft! I’d rather not survive an ocean liner wreck in perfect safety and watch my beloved male friends and family die! I’d rather take my chances andbe an equal than live in a life where the only rewards I can expect for my work are public accolades and superior odds in a natural disaster.”

If you took out an insurance policy for things that still are on record as “acts of God,” like lightning strikes, volcanic eruptions and meteoric impacts, and you paid into that insurance policy 80% of your wages for your entire life, living in the same cramped apartment and eating the same rice and beans every day and working long hours for the same exacting boss, would you actually sleep better at night? Ann Romney wants women to bargain away their whole lives (doing things they “have to” because their vaginas apparently help drive to the emergency room) in exchange for hollow words about how women are the backbone of America. Vision Forum and the rest of the Christian patriarchy crowd wants women to bargain away their bodily autonomy, their careers, their health, their choices, their educations, their property and their dreams for the promise of some abstract “special” reward in heaven and husbands who would supposedly jump in front of angry tigers for them in case that situation just happened to arise.

I’d rather not buy that insurance policy, and live a life with choices, and take the risk of an electric asteroid full of tigers landing on me in the middle of a volcanic eruption in New Jersey. Or getting hit by a toilet seat from space. Life is risky. It’s risky even if you do bargain away your rights. 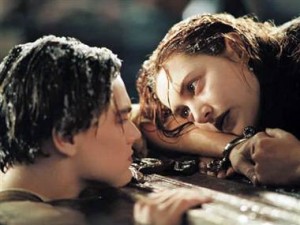 Shove over, Rose, you murderous narcissist. That plank is big enough for three of you!

And now, my last point:

Ann Romney’s speech, put together with the “women and children first” myth, reveals a particular gender discrepancy in public proclamations of martyrdom. As with household decisions, some martyrdoms are bigger than others. Men are expected to be the martyrs who throw themselves in front of raging tigers or brakeless buses. Men are expected to “go down with the ship.” Men are publicly celebrated when they lay down their lives for women, but women who save their partners or others are not afforded the same respect. They just aren’t part of a narrative that serves a political agenda.

This is bordering on some really complex subjects: first of all, reporting bias. News media are in the business of snappy stories that fit predetermined niches: “Women dies saving baby” is almost all you get when you search for news related to women laying down their lives for others. Is that because women only sacrifice for their children, or because the media finds those stories most meaningful? Women dying for their children, men dying for their wives: these are both narratives that reinforce a social hierarchy. The one in power is supposed to give up power to save the weaker person. Second, are men and women  more likely to act that way because of social conditioning? Little girls grow up with princess stories still, which mostly involve being locked up or kidnapped or ransomed and waiting for rescue. Little boys grow up with stories of “tough” men making the ultimate sacrifice: masculinity is determined by a kind of martial valor that involves risking death. Third, there’s the shame factor: it’s socially acceptable for women to survive when their partners die for them, but a man in a similar position faces scorn.

But that would be another six blog posts.

In patriarchy – Christian or otherwise – women are expected to be daily martyrs, to give up little pieces of their lives and their freedom over their lifetimes. Men, on the other hand, are allowed to keep their liberties in exchange for the vague risk that someday they might need to die (with great honor) to save someone else. That’s a problem for many reasons, but here are two for now:

1. It reserves that kind of honor for men, meaning that women cannot achieve the same heroism.

2. It’s a raw deal to give up your whole life in the hope that, in a crisis, someone will allow you to go on living that servile life a little longer.

Oh, and it makes men look pretty bad, too. Here’s Mark Greene again on that subject, just in case you missed it!

September 1, 2012 Greed, Giving & The Duggar Family
Recent Comments
56 Comments | Leave a Comment
"This is late, partly bc of my preoccupation and partly bc I'd been slowly reading ..."
Jennifer Serena’s Serenity – Luxury Hotel, Birthing ..."
"Thank you for your commitment to truth and love, Suzanne. Best wishes to you and ..."
Meredith Anne Not a Goodbye, More of a ..."
"For what it's worth, I've learned a lot from you about a Very Creepy movement ..."
Gwen Pryce Not a Goodbye, More of a ..."
"Unfortunately, this kind of satire (if it even is satire) is what gives Christianity the ..."
Emily Is Biblical Gender Roles a Big ..."
Browse Our Archives
get the latest from
Nonreligious
Sign up for our newsletter
POPULAR AT PATHEOS Nonreligious
1