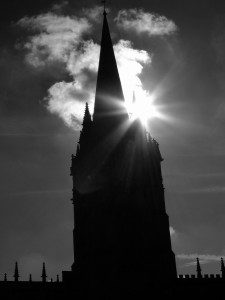 This time around it was different on the surface at least. My husband was trying a kinder and gentler approach to his faith. Rather than trying to make his wife follow behind him in the old Patriarchy Parade, my husband was content to go to church by himself. He did encourage me to go and on the infrequent occasions that I did, he would make a point of being considerate of me.

Even so, I did not make plans to attend on a regular basis, even with my husband willing to leave when I was ready, it was usually about three in the afternoon when we left church. Given that it took over an hour to get there, the day was mostly over when we got home. Also, this pastor believed that the Sabbath was really on a Saturday so that is when he had services. Given that I worked during the week, Saturdays were the only day that I could really get out and do anything.

I remained on the periphery, going to services here and there. Everyone at church rolled out the welcome mat. My husband loved it when I went, but he didn’t harass me about it. For a while, I lived a charmed life. My husband trying to reform himself, embracing his faith in a positive manner, what more could I want?

On the secular front, I noticed that old habits were creeping back in concerning his health; more sitting around, eating more. He didn’t totally revert back to his old ways so I let it go. We had been through so much that as long as he didn’t go back into “couch man” mode, I was not going to raise a fuss.

Then I noticed other things. The first year that my husband went back to church, he made a point of not forcing it on me. Neither did he try to make me conform to some living standard. As time went by I realized that he was hoping all along that I would rejoin him. He was trying to be a softer and kinder “leader”. Now, more and more, I heard my husband defending patriarchy saying that it was Godly and that our problems had been because he and the other men hadn’t been practicing it correctly.

My sister and her fiance’s moving out revealed more. Years ago, at the height of our Patriarchy golden years, my sister had come to visit. She had been studying the Bible and had been baptized at a religious conference during our visit. Now, that she was moving out here with her fiance, my husband invited them to church. At first they were open to the idea and they even entertained the though of having the pastor of the church marry them. Then Pharisee ism reared its ugly head. Because my sister’s fiance, who was raised in a mainstream Baptist church hadn’t been properly baptized (immersed in water as an adult) he was not by their definition a Christian. It didn’t matter that he professed the Faith, in their eyes he might as well been a Pagan.

Not only would the pastor not marry them, but he and my husband advised my sister that she should refrain from marrying him until he had was baptized. In the meantime, she should try to encourage him to restudy the issue with hopes that he would see “the truth” on the baptism issue.

My husband firmly supported the pastor and we had several arguments over it. I didn’t really care that the pastor wouldn’t marry them, but it bothered me that he saw my sister’s fiance as being an unbeliever simply because he believed that the baptism of his childhood counted. Never mind that he was an honorable man who supported my sister. In many ways he was a much better “patriarch” in terms of supporting his wife than any of these guys. Of course, unlike these “patriarchs” my sister’s fiance didn’t believe in the whole Patriarchy issue so his support was without all the rules and conditions. True Christian love. Worse, my husband agreed with him. once again proper theology superseded everything. A side of his old self not only remained, but he had found another crowd who felt the same way.

What was ironic is that both my husband and the pastor the the church liked both my sister and her fiance and even after they got married elsewhere, it was hoped that they would attend church.

Of course my sister and her fiance wanted nothing to do the whole thing by now. My sister had seen the demeaning life that I had lived under Patriarchy. She also knew that the pastor of this church was into the whole Patriarchy thing. He had at their first meeting (about getting married), asked her who her male “covering” was and if he approved of the marriage.

When my sister and her husband did not attend church and when they failed to express any interest in church functions, my husband was disappointed. Worse, on Saturdays, not only were they not there, but I was out with them. Now, it really must have become apparent that I was never going to be spending my Saturdays at the church.