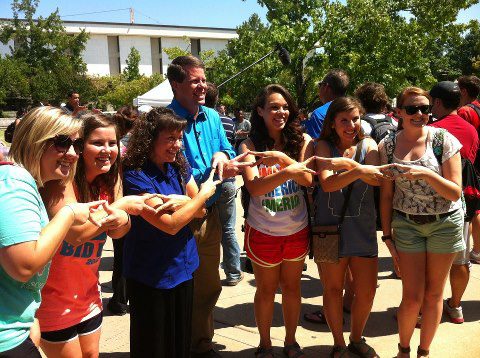 The Duggars were at the University of Arkansas yesterday. No one seems to know why. But here they are posing with the sorority girls from Alpha Delta Pi  house.

Lots of links involving the Duggar family this week online. But most of them are rehashing of the one interview the Duggars did on NBC’s “Today Show”. If you didn’t know it another season of their TLC channel show, “19 Kids & Counting” premiered.

Apparently footage from the show revealed what TwoP commenters have been saying for ages, that Jinger Duggar will be the first to leave the cult compound – Huffington Post – Jinger Duggar, Of ’19 Kids & Counting’ Wants To Move To The Big City

And that clip of Jim Bob Duggar making a semi-salacious remark about having fun trying for child #20 on The Today Show that inspired  Vyckie to write  “The Natural Used of a Woman?  Making Babies For God’s Army No Matter The Risk”

Now, onto things not directly Duggar-related.

An older case of abuse at an Independent Fundamentalist Baptist church and children’s home that the police in Bienville Parish, Louisiana are declining to investigate much less prosecute even as there are plentiful witnesses and victims. Mother Jones and other media outlets have written about the abuse that took place at the Liberty Baptist Home for Boys in Longstreet, Louisiana. From Chuckietravels.com – Unto the Least of These ~ Part 3

Andie Redwine’s film, Paradise Recovered is now available on Netflix! Spread the word and take a look at this excellent film!

If you are still confused as to what ‘spiritual abuse’ actually is then take a look at Sisterlisa Discusses Spiritual Abuse – The Unconditional Pastor: Bob Greaves

The people at the blog Stuff Fundies Like have put together a very funny yet sad bingo card for Church Sex Scandal Bingo  – What would a spiritual abuse or quiverfull bingo card look like?

If you’ve struggled with the question if you should or should not go to church post spiritual abuse here’s an interesting series written by a pastor who’s stopped going to church for the summer – Sojo.net – Church No More

Sexual abuse blame shifting is alive and well in more than just the Independent Baptist Church and their recent scandal involving Jack Schaap. Now some Catholic priests are claiming that the teens are seducing the priests. From Huffington Post – Father Benedict Groeschel, American Friar, Claims Teens Seduce Priests in Some Sex Abuse Cases.

The submission of Christian wives by A Little Whine & Cheese blog – She Submitted. Then She Snapped

What are the real costs of having baby after baby as demanded by the Patriarch Quiverfull crowd? – From The Momma Knows blog – Effects of Militant Fecundity on the Mother

Do you make regular purchases at Amazon? If so, please bookmark this link and click through when placing your order. NLQ will earn a small commission on any items purchased via this link. Thank you for your support. (✿◠‿◠)

August 31, 2012 Ann Romney's Gendered Martyrdom: Women and Children First?
Recent Comments
0 | Leave a Comment
Browse Our Archives
get the latest from
Nonreligious
Sign up for our newsletter
POPULAR AT PATHEOS Nonreligious
1