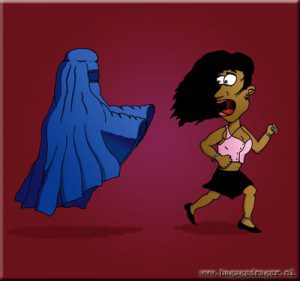 My daughter and I had a very unexpected thing happen on Friday night. We were in a local fast food joint picking up dinner and ran afoul of a group. Laura had shown up unexpectedly along with her brother and his two best friends. I’d only cooked for my husband and myself so out the door it was to pick up take out.

Now all the young adults wanted Chick Fil A, not my favorite place even before the Chick Fil A Appreciation Day but hey, the company weren’t the ones sponsoring that day and I don’t have the awesome super power to dictate my guests taste bud preferences.

As we pulled into the restaurant parking lot I noticed that there was an older school bus painted some dreary industrial shade of gray with burgundy lettering on the sides proclaiming it was the bus of some church name I’d not heard of. Something sort of like “The Holiness Flame of Faith Church of God Miraculous” – something long with lots of references to churchiness.

Guess they were traveling and stopped for dinner because I knew that church wasn’t local.

We walked in and could see that most of the dining area was filled with well-scrubbed folks. The ladies all wore loose blouses and equally shapeless skirts that fell perhaps four to six inches above their ankles. Low heeled flats, only tiny touches of makeup and wedding rings completed their whole fundamental evangelical ambiance. Very pretty and ladylike. I would have made them for what they were even if I hadn’t seen the bus first. The men wore the usual polyester slacks and button up shirts of the flock.

Everyone wore a sticker on their chest, the kind of ‘Hello – My name is’ and the name of the event on them. Conferencers. Going up to the big bad city to attend some sort of conference.

That is something that seems to be on par with Disneyland and chocolate ice cream in my old fundigelical world, going to conferences. You saved, you fretted you didn’t have the time or money to go to all of the conferences, but you went to as many as you could, returning with new materials, new books, new teachings. I always wondered why most conferences had a higher ratio of female attendees.

Spared a glance at the eating crowd and moved on to the counter to order for everyone. While we stood there and awaited our pile of processed chicken and franken-fries I started to get the itchy feeling that someone was watching me. It’s a sudden creepy-crawly feeling when you know you’ve managed to catch the eye of someone and they are busily boring holes into your back. I turned to see who was looking and it was more than one. We were getting those frowny stares from a number of people in the crowd. Laura and I just looked at each other, shrugged, got our stuff and left, not getting why we’re been glared at en masse by the conference goers.

It wasn’t until later the next day that it dawned on me what those hostile glares were all about. Vyckie Garrison posted a link on Facebook that apparently one of the big ideas that day at a Washington DC area faith and politics conference had been that women in general were immodest and should put some more clothes on. I’m thinking the group I encountered had just come from that very conference that day. So the glares were about immodesty?

One of the quotes from the literature was: From the “True Woman Manifesto”: “All women, whether married of single, are to model femininity in their various relationships, by exhibiting a distinctive modesty, responsiveness, and gentleness of spirit.”

You know it’s not like Laura and I were rushing around wearing nothing but a whole lotta string and three postage stamps, we were dressed normally for early fall in the Virginia Piedmont. I guess my knee length bermuda shorts and Laura’s teal mohawk didn’t exhibit the right kind of femininity in their minds. Too bad, I think Laura is adorable in her mohawk. It was her choice.

So now it looks like Fundamentalist Patriarchal Quiverfull crowd has decided to try and add modesty for all women to their political platforms, try to force everyone to dress to their standards. Modesty rears its ugly head again.

Don’t get me wrong, I am not slamming one political side or another or telling anyone how to vote, I’m just commenting on the attempted politicizing of clothing choices. Choices. Another fundamental choice, how will you dress yourself today?

Here at NLQ many better writers than myself have tackled the issue of modesty and how it demeans both men and women. Sierra summed it up best in her “How Modesty Made Me Fat”

Two big things jumped out at me from Sierra’s posting.

1 – When you argue that what’s modest and what isn’t is a valid concern for women, you tell them that their appearance matters most. You objectify them.

Which is exactly what child beauty pageants, some pornography and patriarchy teaches, that only what you look like matters and that women are objections to be used. Vyckie Garrison wrote about the proper use of a woman to a patriarchal man.

Doesn’t matter than you could be so totally awesome of a person because they are going to judge you on how you wrap up the shell that is your body. Saving lepers or working at the local soup kitchen is all canceled out in the minds of those who think all women should be clad in potato sacks. The good you do doesn’t matter, just that you do not show anything that supposedly could lure a man into the sin of lust.

2 – You cannot consider women full human beings unless you recognize that their lives do not revolve around the male sex drive. Modesty is a philosophy that dehumanizes. It incites constant fear and vigilance in one sex while excusing the other of all responsibility. It’s immoral.

At the same time this type of thought process reduces men to nothing more than animals unable to control their thoughts or sex drive. Any time you reduce a portion of the population into ‘things’ not persons it makes it easier to heap them with abuse because, hey, they are just ‘things’ and who cares about what ‘things’ think about their treatment.

It all boils down to control. If that crowd I encountered on Friday night wants to make sure everyone in their gathering is modestly dressed then that’s their own business. But if they think they have a right to make everyone else in the country conform to their dress code, then, to me, it turns frightening. Like something a police state or prison might do.

You know who has state control over women’s daily attire to make sure all women are very modestly attired to keep the men from sinning via lust? Those places where every woman is forced to wear a burqa. Beginning to think that the QF Fundamentalist crowd isn’t going to be happy unless every female six and up are wearing their version of the burqa.

September 19, 2012 IFB Jack Schaap Arrest & Plea Deal
Recent Comments
18 Comments | Leave a Comment
Browse Our Archives
get the latest from
Nonreligious
Sign up for our newsletter
POPULAR AT PATHEOS Nonreligious
1