Duggar Family Singing on the Campaign Trail of Todd Akin

Matthew 12:35 “Out of the abundance of the heart the mouth speaks” 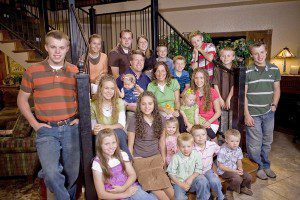 Today some of the more popular media outlets like Buzzfeed, finally picked up on the story that the holier than holy Jim Bob & Michelle Duggar family had started stumping for Todd Akin. They’ve been with Akin and others trying to drum up votes since early this week.

I wonder how long it will take mainstream media to realize that the Duggars are part of the campaign rally for a man almost universally reviled for his repugnant remarks on rape? It’s a question that bears asking considering by doing so the Duggars are stamping their approval on the very thing that makes everyone else hate Todd Akin.

I wonder if Jim Bob and Michelle would be so eager to support him if one of their precious daughters had the misfortune of being raped?

Jim Bob and Michelle Duggar, the heads of the Duggar clan, told their audiences that they had met the Akins in Rolla, Mo., roughly one month ago. “And we just fell in love with them,” Jim Bob Duggar said. “They are such a precious couple.”

Jim Bob knows all about running a losing campaign.

And Jim Bob Duggar is not new to politics: He was elected to serve as a state representative in Arkansas and, later, lost a Republican primary race for U.S. Senate.

“We know how tough it is to be a candidate,” he said. “It’s a lot easier to help a candidate than to be the candidate yourself.”

When Jim Bob lost his Senate race, a photo of his family at the polls ran in The New York Times, leading to national interest in his family and, ultimately, a television show. When Akin won a hotly contested Republican primary for Congress in 2000, Duggar said, that was also “God’s providence.”

“The day of the election, there was a downpour of rain,” Jim Bob Duggar said, “and he ended up winning by 56 votes.”

“Wow,” the crowd whispered in unison.

No matter their well-scrubbed shining facade presented on “19 Kids & Counting” the Duggars now cannot deny that they are any different than the hate-spewing hordes of extreme patriarchy bent on destroying rights for many Americans. They’ve spoken in their support and you can now easily tell what they actually believe instead of what TLC wants you to believe they believe.

But their presence was also the latest mark of the backlash in the Evangelical Christian community that has kept the embattled Missouri candidate in the race for Senate after a remark about “legitimate rape” and pregnancy positioned him far outside the mainstream abortion argument.

Doesn’t look much like the love of Christ they keep talking about on their show at all, now does it?

They sing Von Trapp Family style with a bastardized version of “Edelweiss” at these rallies and then Jim Bob speaks. Out of the abundance of his heart.

Editor’s note: This was written last night when there were only a handful of more mainstream media picking up on the story. When I got up this morning to check and see if anyone else was writing about the curious dichotomy of the TV Duggars and the real Duggars. There were over 450 new articles on the subject. Politico, ABC News, MSNBC and Yahoo among others have articles now. I’m glad because whatever exposes the real Duggars from the genial family on television can only be a good thing.