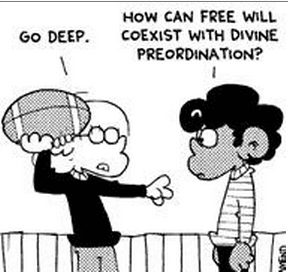 Recently I wrote this to my atheist uncle, Ron:

So here’s a big question for you: do you believe in free will? I’ve been thinking a lot about it lately, I can’t really believe we do have free will. It seems to me that so much of our decision-making is influenced by circumstances completely beyond our control – circumstances which we did not choose. Plus – I don’t know anyone who has managed to actually carry out all their good intentions to live a good life with honesty and integrity. We all want to live well – but things happen and we end up somewhere near the opposite of what we planned.

For example – I really and truly did not want to have any children. I saw what a mess my parents made of it – and I did not want to be responsible for the upbringing of another human being.  I was even determined! I remember thinking as a young teen that the perfect plan would be to become a nun so that I could be close to God, remain a virgin, never get married, not have any children, and teach English – my favorite subject in school. And yet – here I am, mother of seven. How the hell did that happen?  Not that I don’t love every one of them – and I do not regret having them, but wow – it’s hard to even contemplate how someone so unlikely to be a mother (let alone a prolific mother) ends up with seven kids.

In his book, “Willing To Believe: The Controversy Over Free Will,” theologian, R.C. Sproul explains the Calvinist position on Free Will articulated by Jonathan Edwards:

“Man is morally incapable of choosing the things of God unless or until God changes the disposition of his soul. Man’s moral inability is due to the critical lack and deficiency, namely the motive or desire for the things of God. Left to himself, man will never choose Christ. He has no inclination to do so in his fallen state. Since he cannot act against his strongest inclination, he will never choose Christ unless God first changes the inclination of his soul by the immediate and supernatural work of regeneration. Only God can liberate the sinner from his bondage to his own evil inclinations.”

Okay – I will admit that I re-read nearly all of Sproul’s book trying to get a clear response to the simple question, Do humans have free will? … and for all my effort at deciphering the elaborate and convoluted labyrinth of words, words, words, the only thing tangible I managed to come away with was a desperate desire for a double rum and coke. But … the bottom line for orthodox scholars seems to be that we only have personal agency in so far as God allows us to choose what He has ordained – which, in case you’re still confused, is a tedious way of answering, “No, we don’t have free will – not really.”

Arminianism, which is a system of theology supposedly asserting that human dignity requires an unimpaired freedom of the will, nevertheless maintains that unaided by the Holy Spirit, no person is able to respond to God’s will: God alone determines who will be saved and his determination is that all who believe Jesus through faith will be justified. According to Arminius, “God regards no one in Christ unless they are engrafted in him by faith.” If we are saved by faith, and Ephesians 2:8 says, For by grace are ye saved through faith; and that not of yourselves: it is the gift of God – it seems evident that even “Free Will” Baptists, Methodists, Charismatics, and “Non-denominational” denominations do not actually believe we truly have a free choice apart from the sovereignty of God.

“Open Theism” allows for substantive free will by denying that God is wholly omniscient and omnipotent. Also known as “process theology,” this view is based on quantum theory and has been articulated by “God of the Possible” author, Greg Boyd, as well as post-modern, or “Emergent” teachers such as Brian McLaren and Rob Bell.

“Openness is based on God as the Living God. The five most fundamental attributes of God are that God is Living, Personal, Relational, Good, and Loving. These faithfully represent God the way that Scripture presents Him, and starkly contrast with the Greek and Roman philosophical construction of God” – Openness Theology – Does God Know Your Entire Future?, Bob Enyart v. Samuel Lamerson

Before my brain exploded and I gave up trying to figure all this out, I believed Open Theism to be somewhat promising and I read the works of process theologians extensively … which led to an interest in actual science and my attempt to understand quantum mechanics.

In “The Grand Design,” theoretical physicist, Stephen Hawking describes an approach to quantum theory called alternative histories: “In that view, the universe does not have just a single existence or history, but rather every possible version of the universe exists simultaneously in what is called a quantum superposition. That may sound as outrageous as the theory [bio-centrism – another mind-blowing idea] in which the table disappears whenever we leave the room, but in this case the theory has passed every experimental test to which it has ever been subjected.” (p 59)

Never mind for now the question of whether God is actually necessary – instead, let’s think about “the vast landscape” of possible universes, each with its own laws, coexisting simultaneously which M Theory implies. When I tried to contemplate the idea that every possible outcome spawns a new universe in which that possibility is realized, I began to wonder if all varieties of speculation regarding Free Will vs God’s sovereignty might actually be irrelevant considering how little we really know about the nature of human existence. And when all the thinking resulted in the frying of my brain circuitry, a friend suggested that I Google “Bell’s Inequality” because, “the underlying principle destroys reality.” Nice.

A school yard scene comes to mind in which two young children squabble in the sandbox over the fine points of a subject about which an observing teacher recognizes the kids know only enough to confuse themselves and each other. From the teacher’s perspective, both of the children’s arguments are equally invalid.

Do we have a choice? Who knows! Does it matter? Probably not. Whether our children are here by chance or intention, we’re glad to have them.

Still, the question of Choice and why women subject ourselves to multiple pregnancies is a fascinating subject to think about. (✿◠‿◠)

Vyckie Garrison started No Longer Quivering to tell the story of her “escape” from the Quiverfull movement. Over time, NLQ has developed into a valuable resource of information regarding the deceptions and dangers of the Quiverfull philosophy and lifestyle. Several more former QF adherents are now contributing their stories to NLQ and our collective voice makes these Quiverfull warnings impossible to dismiss or ignore

Nearer to Wonder—A Response to Religious Naturalism
Editor’s Note: If you’ve ever wondered about the use of the wide-ranging...
view all Nonreligious blogs
What Are Your Thoughts?leave a comment
Copyright 2008-2020, Patheos. All rights reserved.