Millipede Part 33 How Did I Get Here? Part 4 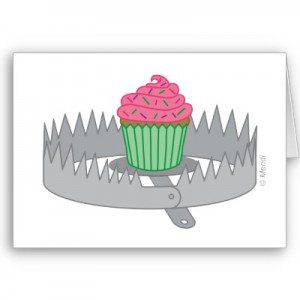 I think that a lot of women traveled the gradual route. It is the sweetest way into the trap.

In my case I can say that one of the bigger issues lies within the sociopolitical cosmos itself. For example, feminism exists in alliance with other causes such as affirmative action and gun control. A similar linkage of various views occurs on the right.

In my case while I believed that women should have basic equal rights as men I held other views that were verboten in the Liberal/Progressive circle in which I was raised and schooled. This led me to search elsewhere.

Even then, I could have stayed out of Patriarchy. However, it was the reawakening interest in the Bible and the fact that I was married to someone who also had the same interest that led me to Patriarchy.

Most Fundamentalist Christians to varying degrees hold with Patriarchy. However, using the same analogy that they use concerning Feminist sympathies, I say that one cannot be “somewhat Patriarchal” any more than someone can be “somewhat pregnant”. To be sure, people believe and practice it to varying degrees. However, accepting the basic premise of Patriarchy the only question remains is how far does one go to stay logically consistent with said beliefs.

Being married to a man who also was on a similar quest was a HUGE difference, especially when he took to Patriarchy. This meant unlike many people, we actually practiced a Patriarchal marriage.

I know many people who give lip service to “man being head of the house”. These folks never get wrapped up in church or various study groups.They tend to be on fire for political issues and like to think themselves as Christians without getting too wrapped up in it. In fact they dislike the hardcore fundamentalist Christians and yet from time to time even while they condemn the extremes of Patriarchy, these same folks will say things like “a man is the head of the house, but he needs to really provide” or “he should love his wife”. Having known such people, they usually practice something like a partnership in their own marriage, but will give lip service to a mild sort of Patriarchy because they see it as part of the Bible.

I could have been the same sort of person except since my husband and I became friends with people who really tried to “live by the Bible”, we had to put our money where our mouth was. Those who gave lip service to Patriarchy were also those who did not like the authoritarian nature of the hardcore Christians. The two groups often fell out with each other early on leaving my husband and I in with the hardcore church going group.

October 28, 2012 The Parenting Project - Introduction
Recent Comments
5 Comments | Leave a Comment
Browse Our Archives
get the latest from
Nonreligious
Sign up for our newsletter
POPULAR AT PATHEOS Nonreligious
1

“Those Who Wish Me Dead”: Clunky Title, Subpar...
Here’s hoping director Taylor Sheridan returns to better stories after this dud.
view all Nonreligious blogs
What Are Your Thoughts?leave a comment
Copyright 2008-2021, Patheos. All rights reserved.
error: Content is protected !!