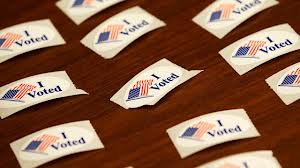 I voted. Deal with it.

Growing up fundamentalist, I was reminded on a near monthly basis that I shouldn’t be allowed to vote. It was inescapable. Central to the Message of the Hour theology was a set of seven prophecies by William Branham that were supposed to usher in the end of the world. My church vigilantly watched, alongside its sister churches, for an earthquake to topple Los Angeles and for a Roman Catholic takeover of the US economy. Amidst all this doomsdaying was a more personal attack: the “evil” of women’s suffrage.

Below is an excerpt from Branham’s sermon “Condemnation by Representation” (1960):

It shall–also has been an evil thing done in this country; they have permitted women to vote. This is a woman’s nation, and she will pollute this nation as Eve did Eden. Now, you see why I’m hammering the way I do. I got, THUS SAITH THE LORD. In her voting she will elect the wrong person. … Then I seen the United States as one smoldering, burnt-over place. It will be near the end.

Women, given the right to vote, elected President-elect Kennedy–by the woman’s vote, the wrong man, which will finally be to full control of the Catholic church in the United States; then the bomb comes that explodes her.Women’s vote that put…

Did you notice the rallies on the television? Nixon to be pretty near all men. All of them wanted to kiss Kennedy (the women), jumping astraddle the cars and everything like that, jumping up and down.

Then I said, “When they elected in Indiana, a twenty-two year boy–year old boy to be judge,” the Spirit of the Lord came on me and I said, “They’ll finally have a president that’ll be one of these crew cut, playboy, beatnik-type presidents, a lady’s man.” Now, them’s predictions years ago. See where we’re at? It’s later than we think. … Now, and you find out then that women given the rights to vote, and they elected a president that they should not have elected. See? That’s that fall.

Voting was a matter of great consternation amongst women in my church. Some felt that they shouldn’t vote because voting was a feminist act. Others thought they shouldn’t vote because  it was unethical to give their husbands two votes (because voting against your husband was a sin). Others thought that they should vote to give their husbands two votes, because all the worldly women were voting, and we persecuted Christians needed all the help we could get, ethical or not.

I voted in my first presidential election (Kerry v. Bush) with great excitement. It was one of my first acts of open defiance to the church. I also panicked quite a bit afterwards. I’d voted for Kerry, after all, and my church was full of dire predictions that William Branham’s prophecy of the United States being taken over by the antichrist pope were coming true. But I didn’t regret my vote. I was proud that I’d cast my ballot, and proud of the women’s suffrage movement that fought for my right to do it.

It is immoral, abusive and contrary to the principle of liberty that the United States was founded upon to attempt to disenfranchise female voters by calling their participation in government “evil.” It is abusive to women (not to mention downright insane) to tell them that their vote will usher in the end of days and end civilization as we know it. It is hubris to speak of women’s votes in terms of their hormones (as Branham did above, insinuating that women voted for Kennedy due to his sex appeal) or their husbands’ votes. Women are their own persons, their own citizens, and I would like to say, loud and clear, to the fundamentalist community I left behind:

Shame on you. Your hatred of women is palpable, and it is prejudice. I don’t care about your overtures to “equal worth in the eyes of God.” If you silence a woman and steal her voice in government, you make her a slave, a non-person, and that is the least Christlike thing you’ll ever do.

I voted. Deal with it.

(Editors Note: America has spoken and soundly rejected Quiverfull policies by not electing any of the men that expounded on rape being a gift from God or any of the others with opinions on rape and conception that run counter to biological facts. It’s a ‘win’ for anyone that has walked away from Patriarchy.)

November 6, 2012
Things I Have Learned Not to Fear
Next Post