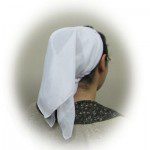 Because the church had consisted mainly of single people for quite some time, my brothers and I were part of the first batch of babies to be born into the church. There weren’t any offspring of attendees/members that were older than us, so it was kind of ambiguous what would happen once we reached the magical age where their theology would be forced upon us.

This all changed when I was about 11 years old.

I watched all this go down with much dread.

I knew that soon enough, it would be me.

I didn’t want to be placed in front of the entire church to be evaluated, judged and humiliated. (I say “humiliated” because I have always hated being the center of attention, and I find it to be a very humiliating situation.) I did not want to be baptized. (I had no real reason for not wanting to. I just didn’t want to.) I didn’t want to wear a head covering. (Who really does?) I didn’t want to take communion. I just wanted to be left alone.

I literally prayed that none of this stuff would be forced on me and that we would leave the church before I began to be preyed upon in regards to these things.

I didn’t understand why girls were singled out like that, but boys could do whatever they pleased. I don’t remember there being any fuss made over boys taking communion or being baptized. I saw it as a way to control and humiliate women and I wanted nothing to do with it.

My prayers were answered one day when one of the people in charge decided to publicly condemn an attendee for saying “I’m good” in response to the question “How are you?” The person who publicized this person’s grammatical error stated that this person should never say that they are “good” because only God is good, and it is blasphemy to say that anybody or anything else is “good.”

Shortly thereafter, we left the church.

November 20, 2012 Quoting Quiverfull: Culture Changers?
Recent Comments
1 Comment | Leave a Comment
Browse Our Archives
get the latest from
Nonreligious
Sign up for our newsletter
POPULAR AT PATHEOS Nonreligious
1