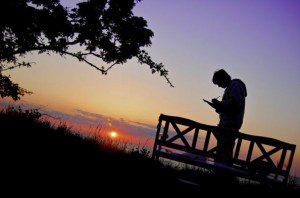 “The man should be the spiritual leader of the home.”  That is the standard teaching of most Protestant, evangelical churches.  The Open Bible website has a whole page of Scriptures which apparently support this– many of which I have addressed elsewhere on this blog.  I believe this teaching springs from a misunderstanding of the historical-cultural assumptions which the writers would have shared with the original readers, which we in modern Western culture are not necessarily privy to.

But the idea remains pervasive that God has decreed that men are meant to be spiritual leaders, and women to be spiritual followers of their men, from the moment they get married.  Some say that God designed men and women this way; others say that He simply decreed this for unknown reasons, and who are we to question?  But if we believe that God is holy, just and good, then we must believe that God’s decree and/or design is somehow good for both men and women.

All men and all women.  Or at least every man or woman who feels no call to celibacy and who desires to be married.

Christianity Today‘s website for Christian women, Her-meneutics, recently ran a blog post by Marlena Graves on this very issue:  “He’s Just Not a Spiritual Leader” and Other Christian Dating Myths.  The author’s main point was that this teaching was being misunderstood, so that women were refusing to marry men whom they did not perceive as spiritual leaders:

Some time ago in the school cafeteria, we ran into a young woman we knew well. Shawn and I had counseled her and her boyfriend the year prior. I asked her about their relationship. “I broke up with him a month or so ago,” she said sheepishly. Shawn and I tried to veil our shock.

A few minutes later, I asked her why. “He’s just not a spiritual leader,” she answered. After we parted ways, Shawn turned to me and said, “I can’t help wondering how many otherwise beautiful relationships have ended due to misconceptions about spiritual leadership.”

As we processed the news and recalled some of our conversations with the couple, we remembered her saying that he had a patient nature, was intelligent, a hard worker, and of peaceful demeanor, complementing her quite well. But she also mentioned that he rarely initiated prayer or Bible study. For her, in the end, not initiating in those areas was a deal-breaker. . . .

I started wondering about all the godly men who may have other spiritual gifts—just not the ones traditionally considered “male” spiritual gifts. For example, what about men who have the gift of mercy or hospitality or service or encouragement, and who are full of the fruits of the Spirit? Do we devalue them simply because they’re not at the helm or out in front but rather operating alongside their partner? Is initiating devotional activities within a relationship really what it means to lead? . . .

A spiritual leader is someone who is full of the Holy Spirit—someone who evidences the fruits of the Spirit in increasing measure. Some women prefer that their partners initiate prayer and Bible study. Of course, they’re free to have such preferences, and even to believe that such initiation is a “male” spiritual gift. But we, as the larger Christian community, should find ways to recognize the men who don’t initiate devotional activities and yet model Christlike leadership because they display the fruits of the Spirit.
Emphasis added.

The problem, of course, is that given this definition, any Christian who is being led by the Spirit and bearing the fruit of the Spirit, is automatically a spiritual leader.  And women can and do bear the fruit of the Spirit just as much as men do.   Marlena Graves seems to me to simply be redefining “spiritual leader” so that it will fit any man, just so that any man can be called that.

When I got engaged to my husband, I too thought he should be my spiritual leader, and it troubled me that he showed very little evidence of being one.  I prayed to the Lord about it, and I received the reassuring impression that Jeff was everything I needed him to be, and not to worry about the rest.  So I went ahead and married him.

But as we relaxed in my uncle’s cabin on our honeymoon, I wanted very much for my new spiritual leader to lead Bible study and prayer– so I asked him to.  Very reluctantly, he complied.  It felt– well, it felt sort of fake.  But since the Bible said he was now my spiritual leader, I believed that leading me was exactly what he should be doing.

So I found myself in the ludicrous position of trying to make him lead.

Needless to say, it didn’t go very well.  Fortunately for our marriage, I decided this was ok, that he just wasn’t that kind of spiritual leader, and I backed off on the leading-Bible-study thing.  We were both much more comfortable.
Today, almost 25 years later, I asked Jeff to look back on that time and explain what he was feeling then.  Here’s what he said:

“I’m not a take-charge kind of guy.  I knew I was supposed to be your spiritual leader, and I also knew I really wasn’t.  And that made me feel stupid and inadequate.  I didn’t want to initiate Bible studies, because I couldn’t be your teacher.  I had been a Christian two years, and you had been a Christian for almost 10 years.  I wasn’t going to disrespect all your experience, learning and knowledge by going on pretending I was leading you, which was all it was– just pretending.”

The Her-meneutics blog post shows that I’m not the first woman, or the last, to go through verbal gymnastics to make an interpretation of Scripture– in terms of male “headship”– fit the actual facts. Any adult Christian can be spiritual leader of his or her children. But for one Christian adult always to be the one to lead the other Christian adult in every marriage– regardless of knowledge, experience, gifts, or years in Christ– now seems to me to be an arbitrary and difficult box to force married couples into.

For Retha, the blog author at Biblical Personhood, the consequences of this teaching were also very negative.  In her post What “the man should be the spiritual leader” did to me, she explains:

I believed a Christian woman only belong with a man who can lead her spiritually. Any other kind of man cannot be the will of God for the life of a Christian woman. In practical terms, that would be a man who knows more of Christianity and love Jesus more than I do. . . .

Needless to say, any man who started to give a slight indication that he likes me, I judged on whether he could lead me, spiritually and otherwise. The few men who did give spiritual leading in my life was already married, and gave spiritual leading to many. The men who showed an interest in me? I simply showed no interest in return. How could I, because I, as a dedicated believer, thought that if he cannot lead me spiritually, the relationship cannot be the will of God?

Laugh if you want. They say many people have an unrealistic view of marriage. “Spiritual leadership” is part of the unrealistic expectations of many Christian women.

Well, I don’t complain about my time of believing that. Knowing God is great- with or without a man. But on age 36, not only a virgin but someone who never had a boyfriend, I looked at the Bible again . . .

Retha also came upon a redefinition of “spiritual leadership” in terms of loving one’s family, expressing that love often, praying with one’s spouse and family, being an active participant in church, and being strong but gentle.  Her response?

But then, a woman who loves her husband and children, expresses that love often, prays with and for her family, is an active participant in her church, etc., who is strong, but gentle– is an equally good thing!  For some reason they call it “spiritual leadership” when a man does it, but not when a woman does it. Why not???

After I sworn off the ridiculously unbiblical “man should be the spiritual leader” idea at age 36, I had my first boyfriend last year – at age 37. This was also a man who could not be my spiritual leader, but it did not matter. Even though the relationship did not work out, it is still a beautiful memory.

Perhaps I will still have a husband some day. Perhaps it is too late. But dammit, I wish nobody ever told me the rubbish of “the man should be the spiritual leader!” I could have been married, with children. I always liked children a lot. And now that I don’t think men fall horribly short of a leadership standard God sets for them, I find I like men a lot more for what they are.
Emphasis in original.

Being single is a beautiful way to serve Christ, and I know God will lead Retha in whatever future path He has for her.  But how painful this was for her!  — and I can’t help thinking about what this idea also did to the men she met in her earlier years, who were trying to find a spouse but were considered to be failing a spiritual mark: a mark that they simply weren’t designed to achieve. How easy for a man to lose confidence in his manhood, when he is given this false idea of what manhood is!  How many good Christian men, men who desire to be husbands and fathers, have found themselves in this boat?

With regards to the first response, only those who find that their natural personalities already fit the box they are being stuffed into, will find it really works for them.  And with regards to the second– many people, like my husband and I, will eventually realize that the over-broad definition is really just a way of pretending.

Maybe the problem is that it never was a good tree, and it was not planted by God, but by human tradition and human misunderstanding.  Maybe God’s desire is that each man and each woman be who they were created to be– whether spiritual leaders or not.

Read everything by Kristen Rosser

Quiverfull: Inside the Christian Patriarchy Movement‘ by Kathryn Joyce

Gay atheist historian draws fire for ‘so many...
DR DAVID  Starkey, above, sure is a queer duck. He’s a gay...
view all Nonreligious blogs
What Are Your Thoughts?leave a comment
Copyright 2008-2020, Patheos. All rights reserved.