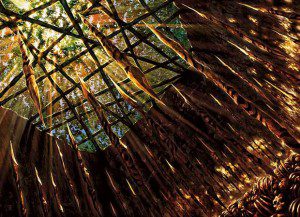 The woman traveling the road to Patriarchy has a large pit in front of her. She doesn’t know it, although at this point in the game, she is starting to get little hints of the not so nice side of patriarchy. She’s finding out that she must give up rights, a few here and there, but as she “grows in the Faith” she learns that it is just the start. there is a long list of rights and expectations that she must give up. Of course, she is reminded at every turn that things like voting and property rights for women were part of a Godless belief system which was used to lure women out of “Biblical” Christianity. A Godly woman knows this and is more than happy to return to her proper sphere, covered by her husband, her lord and protector.

The Patriarchy salesman/pimp has another trick besides sweet words and doublespeak. Knowing that most women fear being stuck in a bad marriage with little or no recourse, the Patriarchy salesman has just the thing to assuage her fears. Call it the Key to the Kingdom if you will.

He tells her that if she is obedient to her husband, God will bless her. Furthermore, in more extreme circles, authors like Debbie Pearl state that an truly obedient woman will unlock positive and kind emotions in her husband’s heart. Her submission will set his heart aflame and he will seek to please her. It is actually, such proponents explain, a mutual system of benevolence in which both partners mutually love and honor each other.

A note here. The crowd I fell in with did not embrace such extremes. Although Michael Pearl’s book “To Train Up a Child” was a mainstay, his and his wife’s views on submission were considered to extreme. This was especially true in that the Pearl’s invest sole responsibility to the wife to make a marriage work. Our pastor believed that even with the most submissive and Godly wife, a man could still be carnal. Also, he didn’t like that the Pearl’s implied that a woman’s salvation lay in only how she served her husband.

However, our pastor was also very against the notion that some moderates hold; that a wife is only to submit to a Godly man. In his view, a woman should strive to be a submissive wife irregardless if her husband’s Godliness as it was part of a God ordained order and the Bible was filled with examples of people in a lesser station submitting to those with greater authority in order to honor God.

That aside, it still boils down to a simple point; being a Christian woman means submitting to the God ordained authority of one’s husband (or father). This is the Key to a measure of a woman’s Godliness. Indeed, a Christian woman’s duty for the most part (about 95%) consists on how she relates to her husband and how she manages the house.

It is a tool and a task which has the strange effect of making one feel empowered. Now, the woman has a job and a method to accomplish it. It is a much needed succor after having lost so many rights and it couldn’t come a moment too soon.

I remember how it was the in the first year or so after we got serious about “being Christians”. I remember the disappointment of finding out bit by bit, that Christian women had basically no rights and lived solely through their male head. This coupled with the changes that occurred in my husband as he became a believer in Patriarchy.

Amidst the arguments, I was always drawn back with doubletalk and dubious promises. It was important to be consistent in the practice in one’s faith. One couldn’t pick and choose which part of God’s Law that they wanted to follow.

At the same time, my world was turning to home and projects related within. The more I delved into women’s work; the more praise I got. My husband was proud that I could garden and can. He was sure when explaining to secular friends that my housewife status was not demeaning, but was a job in itself.

It also helped to be with other women who were fellow believers.