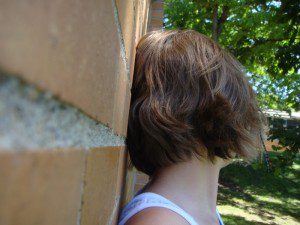 The World. It’s been a while now; now that she’s turned away from it.

The woman still sees her family, friends from times past, but there’s an invisible line now. They are not followers of the Bible although some profess to be. Even if they are by in large, good people, they are lost or at best going down a wrong path. No matter how much she cares for them, she is always reminded by her new found beliefs that these people will for the most part, be lost forever.

Even if the new convert is not the type to offend or to proselytize, she is conscious of the division and it cannot help but create a distance. People(worldly that is) in turn sense it and even if they don’t, they notice the change in her behavior. When these folks talk to her and hear her new beliefs, they are secretly repelled and pull away.

It’s sad, but a price to be paid for truly following God and His Laws in a godless society. Besides, she has all sorts of new friends, people who believe as she does. Many of these friends are women and they too are trying to follow Biblical Patriarchy. Immediately, she forms a close bond with these women. They are proof that her misgivings about embracing Patriarchy are vapors. Here are nice, intelligent women who are also convinced that following God means submitting one’s husband. Here’s proof that submissive, Godly women are not doormats or masochistic sops.

They share views on various subjects. They also share trials and tribulations of their faith. They agree that men can be hurtful and are often in the wrong. However, they are committed to God enough that they endure this and in doing so are victorious. Any suffering is outweighed by the serving God and in turn, their marriages are happier for it.

It’s true, the new convert agrees. These women seem happy and they have nice families. The children are certainly well behaved, much better than most children one sees these days. Their husbands seem to be happy with their wives, often boasting about their cooking or other skills.

She sees the seeds of a healthy wholesome society in her circle of friends. Sure, it takes some getting used to. The whole “order in the home” bit demands so much sacrifice on the part of the women. However, here is living proof that it can work.

She feels happy, she has made a difficult choice, but the sacrifice has paid off.

In the midst of this, she still has some misgivings. It must be more baggage from the past. Yet, she can’t do away with it entirely.

For one thing, she notices things…