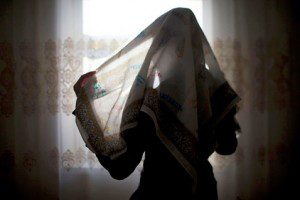 Within a few days of my youngest brother’s birth, my hair turned curly.

I had had wavy hair since I actually got hair at about age 2-1/2, but as soon as little Timmy made his appearance, those waves turned into a full head of spiral curls.

(I actually didn’t even know what perms were until I was in my late teens and I watched my grandma do one for one of her beauty school classmates. Naturally, I didn’t think much of that idea. Curls are nice, but I’d never sit in that stench for the sake of a few curls.)

In a way, I became sort of obsessed with my hair. I wanted my hair to be very long because it’s convenient to hide behind long hair. I knew I had really beautiful hair, and if I could draw people’s attention to my hair, they wouldn’t be paying attention to the rest of my pathetic little self.

I was never pushed into having long hair. I genuinely preferred it, and I would have wanted it regardless of what anybody said or thought about it. My desire for long hair had more to do with emotional/psychological issues than religious rules.

This is one of the ways that I was a stereotypical patriarchal daughter. I just sort of fell into the role, whether I realized it or not. Later, I was exposed to some erroneous doctrines that made me believe that I was living in holiness and righteousness because I had long hair, but it also made me believe that my holiness and righteousness was completely hypocritical. While I was submitting to the command to have long hair, I was rebelling because I wasn’t wearing a head covering.

These ideas did NOT come from my parents or any church we attended, although attending the patriarchal church did not help the situation at all.

For a while, I inwardly struggled with the idea that I needed to stop being rebellious and start wearing a head covering like a good, submissive Christian girl was supposed to do. Fortunately for me, my pride and ego wouldn’t allow me to actually go through with such a ridiculous notion. It would have been another thing I would have had to explain to people, and I just wanted to live a quiet, peaceful life, avoiding as much conflict as possible. So I tucked the guilt over my rebellion into a little corner of my mind and did the best I could to forget about it

November 5, 2012 The Parenting Project: School & Parenting
Recent Comments
0 | Leave a Comment
Browse Our Archives
get the latest from
Nonreligious
Sign up for our newsletter
POPULAR AT PATHEOS Nonreligious
1