Those That Do Harm…

Those That Do Harm… November 16, 2012 Suzanne Titkemeyer 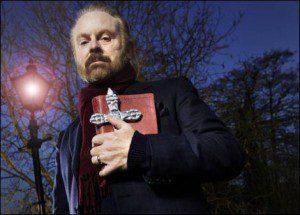 …in the name of Christ harm not only themselves but legions of others, driving some completely away from the church.

Please forgive me dear readers because I’m about to get all flip, sarcastic and ranty here. I feel like using lots of obscene words. I’ve been triggered. Trigger warning for this if you’ve ever been subjected to the whole ‘exorcism’ thing.  I witnessed one back at my old church.

After writing the other day about how fundamental evangelical patriarchal types are notorious for telling people with serious health issues and mental health issues in particular to just pray it away I stumbled across the blog of Bob Larson of the Spiritual Freedom Church.

You know Bob Larson. He’s the one that if the Burning Bush of the Bible had appeared to him old Bob would have seen a dozen demons under the flaming leaves. He’s a demon in every pot and a demon in every garage kind of a guy. He has no time for the failed flawed reality of the human condition. It’s all Demons, Demons, Demons and he’s all about casting them out.

I clicked through his pages, seeing his Demon Test that you have to pony up a credit card for and found many rants about how our country was going to hell in that proverbial decorated liberal hand-basket along with his thoughts on why everything is a demon and how the world needs exorcism immediately! He hates Harry Potter, Rob Bell, Tiger Love and anyone who thinks differently than him. But he especially hates rock n roll, even all Christian music with a syncopated beat!

Apparently Bob Larson was also supposed to have his own television show that was scheduled to run on Lifetime Network except it was cancelled at the last minute due to public outcry. It was called “The Real Exorcist” Bob blames a coordinated effort by demon-addled homosexuals got it canceled.

Frankly I’m glad it was cancelled because if you didn’t have demons before watching the show the violent rituals many exorcists use seem like they might give you a demon. (just kidding!)

What set me off about Bob Larson’s blog were his words about a tragic murder of a child by its mother. The very title set me off, DEMONIC MOM MURDERS it screamed in BOLD text, the internet equivalent of shrieking and yelling.

I’d been following in the online papers the sad story of Elzabieta Plackowska stabbing her 7 year old son and the young daughter of a friend to death. It has been reported that Elzabieta had been repeatedly reaching out for help to a local church yet no one knows yet how they handled her problems. She’s stated to the police that she believed she was locked in a life or death battle with Satan and she killed the children to rid them of demons. It’s tragic alright, because everything that  has been said in the papers about this woman indicates she was mentally ill. Only someone going over the edge of sanity into madness would think by killing their child they were ‘saving’ them.

So Bob, Mr. Answer Man, blames it on ‘Demons’ in his blog.

Makes me want to put his head in a paint shaker down at the local Sherwin Williams, turn it up to high to shake some sense into him and yell at him – MENTAL ILLNESS IS NOT DEMONIC AND TREATING IT AS A DEMON IS HARMFUL!!

Some media outlets are reporting she did it because she was angry at her husband, which sounds like a cop out to me. They are reporting that there was nothing to indicate she had ever suffered from mental illness or depression. Being angry at your husband and getting back at him is rearranging all his belongs so he cannot find a thing or kicking him out of the house, not killing a child.

With some mentally ill people they can manage to hold it together fairly well in public until they reach a breaking point. I suspect that the psych exam ordered yesterday for Elzabieta will show that there were warning signs everyone ignored. If nothing else her bizarre behavior in repeatedly reaching out to the church tells me that there were signs that she wasn’t in a right mental state.

Have a sad feeling that when all this shakes out the church she contacted will have told her to pray, simply to pray, instead of advising her to get the mental health she so desperately needed. How many more bodies must pile up before people realize that it is irresponsible to tell mentally ill people not to get treatment?

Tell me what you think..

November 16, 2012
Quoting Quiverfull: Who Is Ultimately In Control of Conception?
Next Post

November 17, 2012 Quoting Quiverful: Is Having Babies Everything?
Recent Comments
6 Comments | Leave a Comment
Browse Our Archives
get the latest from
No Longer Quivering
Sign up for our newsletter
POPULAR AT PATHEOS Nonreligious
1