Fearing God at The End of the World

Fearing God at The End of the World December 20, 2012 Vyckie Garrison 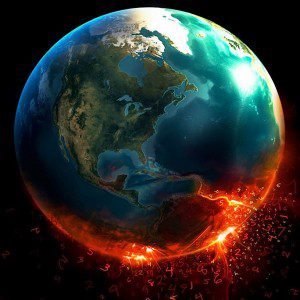 To tell the truth, I am a little afraid – not that the world will end, but that life goes on and I have relatively little control over whatever the future might hold for me and my family.

As most readers at No Longer Quivering know, I no longer count myself among the God-fearing faithful. When I was a Believer, I honestly thought that I was fearless – not that there was nothing to be afraid of – to the contrary, as a Christian, I had all the usual anxiety of living in an uncertain modern-world-gone-mad compounded by the added terrors particular to Evangelical culture; namely, the World, the Flesh, and the Devil – all of which, I believed, were aligned against God and doggedly determined to steal, kill, and destroy my eternal soul, and my precious children’s souls too!

BUT … I regularly consoled myself with inspiring and comforting words from scripture such as, “Perfect love casts out fear,” “God has not given us a spirit of fear,” “When I am afraid, I will trust in You,” and my personal favorite from Isaiah 41:10 “So do not fear, for I am with you; do not be dismayed, for I am your God. I will strengthen you and help you; I will uphold you with my righteous right hand.”

So every night, I said my prayers, trusted God … and slept peacefully, believing myself and my children were safe and secure in God’s protective love.

And what about now? What consolation is there in unbelief when things go horribly wrong as they did last week in Newtown, Connecticut? When I read about the cold-blooded, execution-style mass murder of the Sandy Hook elementary school children and their teachers and would-be protectors, I confess that I wanted to pray.

I wanted to pray for the victims; I wanted justice and I wanted all those little kids to have their lives back! I wanted innocence and trust restored to the survivors, I wanted all of us to feel safe again. I wanted to pray for Adam Lanza; that he would have another chance and this time, make life-affirming, rather than deadly choices. I wanted to pray for this crazy world we live in; there are way too many wrong-headed, corrupt and failing societal influences predisposing and even compelling mankind to act against our own best interests. I wanted The Big Guy to break His silence, come down here and put the world back together!

I mean, as a divorced mom, what can I do, really, to ensure that my kids are protected? How can I be sure that one of my own white male sons won’t one day go off the deep end and inflict unspeakable carnage on family, classmates, or co-workers?

Trust in God? … believe me, it’s tempting. Especially because I have actually experienced that “peace which passeth understanding” and I know how comforting it is to simply trust and obey.

According to Christian apologist, Ray Comfort, America’s gone crazy because as a nation, we’ve lost the fear of God.

The bible tells us that the fear of God is the beginning of wisdom … but “we have had British Redcoats invade our nation, and shoot at youth through the heart. Men like Richard Dawkins and Christopher Hitchens … have come in with these smooth English accents and have convinced millions of young people that they’re nothing but primates. There’s no ultimate right, there’s no ultimate wrong. And when that happens to a nation, when they make them into God haters, something dies within a nation, and that’s what has happened in America.”

“When a man can go to an elementary school and shoot people, including children to death, and then shoot himself, he doesn’t fear God in the slightest.”

But what if it’s actually the other way around? What if we fear God because America’s gone crazy?

Chris Hedges, a graduate of Harvard Divinity School and author of American Fascists: The Christian Right and the War on America, says “those in despair search desperately for a solution, the warm embrace of a community … a sense of purpose and meaning in life, the assurance they are protected, loved and worthwhile.”

For myself, I know this is true. In the past, during those times when I have felt overwhelmed by my lack of control over life’s unpredictability, it was always nice to think that so long as I was in the center of God’s will (“The Hiding Place” according to Corrie ten Boom), my loved ones and I would be safe; shielded and protected by the One Who is all-wise and all-powerful and all-loving.

Maybe I can’t get a grip on life, but if I can somehow convince The Almighty to take control on my behalf …

Of course, the reality of my circumstances never actually changed – it’s only a very clever mind game and I have lost the ability to play this trick on myself.

But I’ve come to recognize the value of apprehension – because fear which is not squelched or pacified by the mental hocus pocus of pious devotion can be a great motivation for necessary change. Without the thought-stopping effect of 366 biblical “fear-nots,” these days, when I am afraid, I have no other option than to actually figure out: What is so terrifying? Why am I scared? What should be done to prevent my fears from materializing in reality? What do I need to do differently?

I readily admit that not having chapter and verse and the prompting of the Holy Spirit to tell me how to raise all these kids is a challenge. When I first realized that I no longer believe in God or the authority of His Word, I fully expected to wake up one morning and feel so completely lost and overwhelmed by the responsibility of parenting a quiver full of children “in my own strength,” that I would just give up. And I’m sure that I would have, except I didn’t know how to “give up” when I had little ones who needed me and who simply expected me to keep doing the mom thing.

So I did the mom thing.

At first, I literally had to force myself to think. I was so accustomed to having a ready response, a sure-fire formula, a one-size fits all solution … and if all else failed, I could always pray about the problem and turn it over to God. What would Nancy Campbell do? Naturally, she would smile and do the next thing … (✿◠‿◠)

Thinking requires a lot of effort – ugh! And it’s especially bothersome when the lid is lifted off the box of my “biblical worldview” into which I’d confined my range of thinking and suddenly all possible options are open for consideration. If the kid’s problem isn’t necessarily a matter of sin or demonic oppression, maybe there’s something physical (too tired, poor nutrition, chronic pain?) or psychological such as depression, ADHD, or a learning disability (what?!! label my kid?) …heck – it could just be that my children are immature and need to be given the freedom and space to live and learn.

Sans my former fundamentalist mindset, the only thing I definitely know for absolute certain is that there are no guarantees. Yes, I must “train up” my children, but ultimately, there’s no way I can control what they will choose to do with their lives, and I’m not counting on God to keep them in line either.

It’s a scary prospect, but that’s the reality of raising kids these days. Ironically, there is a sense of peace that comes from facing our parental fears and even embracing the iffiness of life. There’s a lot of speculation going on across the Internet about where we went wrong, who’s to blame, how could we have prevented the monstrous atrocity of the Sandy Hook massacre? The introspection is good and necessary, but obviously, there is no single solution, no one problem that we can readily pinpoint and correct. The truth is, we just don’t know what really happened or why.

While Mary Pride disparaged today’s “no-fault child rearing,” I am beginning to appreciate the axiom, “All I can do is all I can do.”

Maybe my adventure in parenting a whole passel of kids will end in a crash-and-burn disaster and I’ll go down in history as the mother of the next Adam Lanza. Odds are, it won’t happen – just as it’s unlikely that tomorrow will actually be the End of the World. But faced with such terrifying scenarios, however remotely possible, why not “eat, drink, and be merry”? Not because tomorrow we die, but rather, tomorrow we’re likely to live … and like it or not, there’s really no predicting how that’s going to work out for us.

December 21, 2012 Quoting Quiverfull: Making Men Successful?
Recent Comments
28 Comments | Leave a Comment
Browse Our Archives
get the latest from
Nonreligious
Sign up for our newsletter
POPULAR AT PATHEOS Nonreligious
1