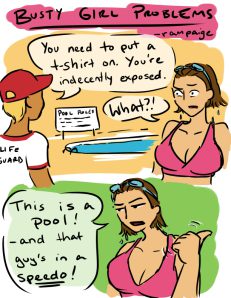 Definition: The “modesty doctrine” is the belief that women need to cover their bodies to prevent men from being attracted to them, because sexual attraction is lust that leads to sin and death for both.  The modesty doctrine is not the same as wearing conservative clothing. You can do the latter without believing the former. The modesty doctrine is found in fundamentalist Christianity, Judaism and Islam, with milder echoes in mainstream Western culture.

In my previous posts on the modesty doctrine, I’ve written about how, as a teenager, I believed that the only solution to the problem of male lust was to have a sexless body. This desire for androgyny contributed directly to my eating disorder, as I deliberately tried to purge myself of curves. Is self-starvation extreme? Yes. Is it illogical as a response to the modesty doctrine? Not at all.

I posted this excerpt from Feministe’s article on the Stuyvesant school dress code on Monday, but it bears repeating:

Beyond the treatment of young men as uncontrollable animals and the treatment of young women as rape-bait, the Stuy dress code enforcers also appear to fall into a common problem with dress codes generally — defining an “appropriate” body. As the students quoted in the Times article implied, some of them technically met the dress code but were still told they were “inappropriate,” not because of what they were wearing, but because of how it looked on them. I don’t know what those students look like, but I’m going to guess it comes down to boobs and butts. Flesh is what’s often considered “inappropriate” — B-cup boobs in a turtleneck are fine, but double-Ds are not; straight hips in a pencil skirt are fine, but curvy ones are not. It’s the body that’s being policed, not the clothes.

The modesty doctrine isn’t about clothes, it’s about bodies. It’s a method for punishing women who do not conform to an idealized, asexual, inoffensive body type. The “offenders” are women with large breasts, wide hips, or discernible “booty.” The modesty doctrine claims that the right clothes conceal a woman’s figure, and that the wrong ones expose her curves. The problem is, some women have figures that cannot be concealed. Even denim sack jumpers will reveal a curvy woman’s hips or breasts when she moves. When I was rebuked for my clothing as a teenager, it was often identical to the clothing all the other girls were wearing. The only difference was that I had “developed” first. The modesty doctrine defines some bodies as inherently problematic.

The hyper-vigilance of fundamentalist men and women to root out “immodesty” conceals a hatred of female sexuality: secondary sex characteristics should not be visible except in approved circumstances. The system is designed to ensure that the only time a man is “turned on” by a woman is when he is allowed to act on his urges: in the marital bed. In other words, if a woman’s body is visible, it ought to be available for sex. Although I don’t think many men think this consciously, the idea crops up in misogynist rhetoric all the time. “Immodest” women are “asking for it,” or it’s “false advertising” if a woman in a short skirt won’t go home with you, or (in the terms of the Christian patriarchy movement) a woman “defrauds” a man (literally, deprives him of a right or property) by allowing herself to be attractive in a situation wherein sex with her is illicit or unwanted.

The modesty doctrine frames this idea in terms of clothing to preserve the veneer that women are somehow to blame for this, and that there’s something they can do about it. There isn’t. The modesty doctrine revolves around the assumption that a man has a right to sex with every woman he finds attractive. In Christian fundamentalism, he only has a right to sex with his wife. Therefore, other women who are attractive to him seem to taunt him with something he can’t have (extramarital sex). That’s why certain women get singled out as threats, despite trying their hardest to be “modest.” It doesn’t matter what they wear; if men find them attractive and can’t marry them, they must be punished. This disproportionately happens to curvy women because their sex is impossible to erase.

Something’s missing here. I hope you’ve picked up on it. The woman does not have any agency in this model of male sexuality. What she wants or doesn’t want is either erased or subordinated to what he wants or can’t have. The relationship is between the man, her body, and the law (monogamy). Similarly, entire facets of male sexuality are written out. Men are not allowed to see themselves as objects of desire, to consider themselves attractive or to enjoy the idea of sex with an initiating woman. The corollary to accepting that sex isn’t about having a right of use for another person’s body means enjoying the experience of having a woman express genuine interest in you. In the fundamentalist model of sex, men are aggressors and women are reluctant recipients. Relinquishing the right to sex with a woman and replacing it with mutual consent means finally experiencing sexual interest that isn’t forced. It threatens patriarchal masculinity, however, because having that experience (being wanted) means letting go of superiority and admitting to having the same experience women do. It means acknowledging a woman’s capacity to be the one with desires and one’s own capacity to be an object of desire. Fundamentalist men also aren’t allowed to acknowledge that, despite their monogamy, their bodies will occasionally feel attraction to others, and that attraction does not in itself have a moral value.  Every misplaced flutter of the heart explodes into anger at being “defrauded.”

A similar dynamic takes place when men justify the modesty doctrine by arguing, “I wouldn’t want other men looking at my wife like that.” That expression reflects the pride of possession and defensiveness fundamentalist men are taught to feel regarding their wives’ bodies. If a man believes women who dress “immodestly” are depriving him of his right to sex, he also believes that men who look at his wife with sexual interest are trying to assert a right to sex with her. In other words, they’re threatening what belongs to him.

This is all quite dehumanizing. It sounds scary and extreme. I can see the heads shaking already. That’s fine. What I’m analyzing is a system. I certainly don’t think that most fundamentalists – or even most people – have thought the problem through to this degree. Most of my thinking as a fundamentalist girl was reactionary (“That guy is staring at me. I need to go change.”). Most men that I grew up with never interrogated themselves over why they were so disgusted with an unattractive (to them) woman wearing shorts. They never outright said “she’s offering me something I don’t want,” but they did say things like “nobody wants to see that,” which isn’t too far off. It doesn’t take into account that she might have reasons for wearing shorts other than for them to look at her. They assumed (probably without recognizing it) that women’s bodies were for looking at whenever they weren’t completely hidden.

Feminists will probably find all of this annoyingly familiar. What am I saying, after all? The modesty doctrine is rape culture. It is inseparable from patriarchy. It is the very means by which patriarchy reduces women to mere flesh. “If I can see it, it’s mine” is the motto of a thief. If a woman’s body is the “it,” it’s the motto of a rapist. “If I can see it, she’s defrauding me” is the motto of Christian patriarchy. The Christian patriarchy movement attempts to obliterate a woman’s sexual agency in several ways:
First, it demands she cover up to keep men from wanting what they see.
Second, it sanctions sex with a woman based not on her consent but upon marriage vows (“it’s impossible to rape your wife because her body is yours”).
Third, it places control over marriage vows in male hands through courtship (father and husband). Consent is therefore farcical.
Fourth, it demands that women, not men, face the consequences of sex: either the guilt of adultery for the imagined sex a leering man has with a woman he finds attractive, or the perpetual pregnancy resulting from marital relations, as birth control is forbidden.

The modesty doctrine goes way deeper than the denim jumper. It’s a central pillar of patriarchal religion. Doing away with it means finding another support for ethical sexuality. I think it means replacing the idea of possession with the idea of sharing. It means seeing consent as a permanent requirement, one that doesn’t expire upon marriage. It means moving beyond a toddler-like vision of the world (“everything is here for me to look at”) to an adult one (“I can see the world around me, but it isn’t about me”). It means ceasing to fear that you can be defiled by something you see (it’s what comes out that defiles you). It means taking responsibility for your own actions rather than accusing others of “forcing” you to sin. It means ceasing to assign respect or perceived moral character to women based on how much or how little of their bodies are visible, or how curvy they are. Finally, it means replacing a functional definition of women as bodies with a recognition of women as full human beings who can wear whatever they damn well please.

December 18, 2012 Quoting Quiverfull: Socialized?
Recent Comments
59 Comments | Leave a Comment
Browse Our Archives
get the latest from
Nonreligious
Sign up for our newsletter
POPULAR AT PATHEOS Nonreligious
1