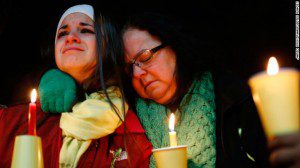 This post continues my views on the “article”, written by Timothy Birdnow of The Tea Party Nation.

There is the key to our whole cultural disintegration; we refuse to recognize Evil as a transcendent thing. Good and Evil presuppose a God and a Devil…You see it in the schools where children may no longer be corrected. There was a time when teachers actually spanked children; now a teacher is in peril if he verbally chastises a bad kid.

Good and evil does not presuppose a god and a devil.  My children are the children of practicing atheists and completely understood the evil in what happened at Sandy Hook Elementary.  My children do not get spanked and know exactly what is right and wrong in many situations.My little five year old daughter wept for half the night last night for the children of Sandy Hook.  She worried about the shooter coming to her school.  Kristine, my wife, slept with her ALL NIGHT, consoling her at intervals.  She has a brilliant mind and deeply understands what is good and what is not.Why?  Because I taught her from the Bible?  Not remotely.  The Bible is full of murder and genocide, SANCTIONED BY THE VERY GOD THESE PEOPLE PRETEND TO KNOW.  God didn’t order men and women to go and shoot little pieces of metal into children.  No, he ordered them slashed and spliced by sharp metal objects.  He ordered pregnant women to have their bellies split open to prevent people who didn’t give his band of nomads their land from successfully reproducing.  He gloried in children being smashed against rocks.  He ordered the death of adulterers, gay people.  The stoning of rebellious children.  He created the idea of an eternal death, being burned forever, for simply not acknowledging his existence.  All this is only scratching the surface of the very book that Birdnow, et al, say they get their absolute morals from.My children know that the Bible god was an evil being.  How?  Because they know that killing people is very wrong.  Especially if it is just because they disagree with you.  Or…for revenge – like the Bible god.

Teachers understand bullying.  Teachers understand right from wrong.  Teachers understand the value of teaching children to think, rather than telling them to just accept.  To just accept is to roboticly do whatever you have been told, setting up the sorts of scenes like the Salem Witch Trials, the murderous acts of John Calvin, the Inquisition of the Catholic Church, the massacre of millions of Jews during Hitler’s reign, the obliteration of millions of Russians during the years of Stalin and beyond, the Civil War in America, the hundreds of foreign actions we do across the globe, the killing of innocents with drones from the air-conditioned, plush seats of a lab in Nevada.

All of these deaths were done by people who followed orders.  Had human beings been taught to question authority and think for themselves and act on that thinking, might some of these epic tragedies been thwarted?  I suspect so.  Only the future can tell.
Comments open below
Read everything by Incongruous Circumspection!
I am a 30 something husband of one and father of 6 dynamic and loud children. My wife and I are still madly in love – at least in my view. My world is exciting, tense, and full of life. I love to write and hope to one day, do it full time. – Incongruous Circumspection
The Spiritual Abuse Survivor Blogs Network