Trigger warning: The linked article contains a graphic description of gang rape. In fact, the warning applies to all of the links in this post. 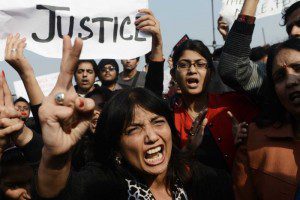 E.J. Graff at The American Prospect writes, in Purity Culture is Rape Culture:

Too many people still conceive of rape as a man’s overwhelming urge to enjoy the body of a woman who has provoked him by being attractive and within reach. As is true in many “traditional” cultures, much of India still imagines that the violation was one against her chastity…. But conceiving it as primarily a sexual violation places the burden on women to protect their bodies’ purity. But seen from a woman’s own point of view, rape is quite different: It’s punishment for daring to exist as an independent being, for one’s own purposes, not for others’ use. Sexual assault is a form of brutalization based, quite simply, on the idea that women have no place in the world except the place that a man assigns them—and that men should be free to patrol women’s lives, threatening them if they dare step into view.

Readers here will find Graff’s argument familiar. I’ve made it before. So has Sarah Moon. So has Libby Anne, more than once. Simply put, in cultures that glorify female chastity, a woman’s sexual “purity” is considered of greater value than her right to an independent existence. This attitude creates a culture of victim-blaming, which is the definition of rape culture: a culture that excuses rapists and blames women for their own victimization.

This is precisely why it’s dangerous to argue that women ought to dress modestly to avoid male temptation. Doing so perpetuates the lie than men can be tempted beyond their ability to resist, and frames their acts of violence and depravity as inevitable results of forces beyond their control. Doing so creates an environment in which rapists can operate.

January 11, 2013 Quoting Quiverfull: The "Suckling Mother"?
Recent Comments
1 Comment | Leave a Comment
"There seems to some information that plain clothed Police were starting the riot and arson. ..."
Rann Racism in Quiverfull Evangelicalism of the ..."
"So I'm assuming Lori was up in arms when mostly white people rioted after Joe ..."
AFo When You Keep Putting Your Racist ..."
"Or they just confine themselves to the bits that seem most relevant to their current ..."
Raging Bee Complementarian Marriage and the Lies They ..."
""Every night for hours, ten nights or more in a row?" I call bull$h1t. That's ..."
Raging Bee Complementarian Marriage and the Lies They ..."
Browse Our Archives
Follow Us!