Was I Spiritually Abused? 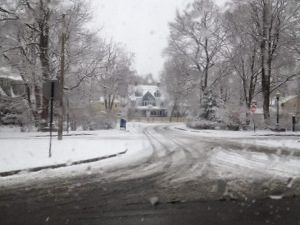 I was just asked if I could add my blog to No Longer Quivering, a site for people who have left and are speaking out against the Quiverfull movement and people who are interested in learning about such things. My blog will now be cross-posted under the Spiritual Abuse Survivors Blog Network. I guess this is sort of a big deal for me, particularly considering the role NLQ bloggers had in helping me understand my own story.

Being a researcher at heart, even in the middle of a meltdown, when I was hit by these scary and to me inexplicable symptoms (flashbacks, nightmares, insomnia, concentration problems, a generally creeped-out on-edge feeling, and feeling compelled to avoid people for reasons that made no sense even to me), I started googling late into the night (and early into the morning) for answers. I finally typed in “overcoming childhood abuse,” not even mentally sure that what had happened to me qualified as “legitimate” abuse, with all the levels of doubt and denial that were in between me and the past. I quickly discovered that that’s what this was, and I ended up making a counseling appointment where I was told I had PTSD. I didn’t accept that either (yeah, authority issues), until with more research, I realized that yes, it was true. I did.

It was through trying to solve this issue, find others like me (hopefully ones with good advice and happy outcomes), that I googled “homeschooling and child abuse.” I came across the NLQ site, Chandra’s posts, and then I looked at some other posts, Melissa’s, then Vyckie’s story. I read it all with a lump in my throat. This was exactly what had happened to me. How? People were talking about spiritual abuse. Had I been spiritually abused? Was that a real thing? I had never even considered it because that would have meant considering spirituality itself, an off-limits topic in my mind.

I spent considerable time trying to wrap my head around all this information and getting to the point of where I decided to publicly tell my story, and can honestly say blogging about spiritual abuse is still never something I imagined myself doing.

The concept of spiritual abuse (or even emotional or verbal abuse) existing didn’t cross my mind growing up. It was the physical abuse, material neglect, and the educational and medical neglect that I was primarily concerned with. All of those issues had a spiritual component though. It was because the spiritual aspect of life took up all the room, the fact that everything was seen as spiritual, that made life pretty dangerous sometimes and often at least generally unpleasant and sad for the physical side.

Few people knew that I had stopped believing in God at age 11 or that I’d been repeatedly told I was on a “pathway to hell” after ill-advisedly sharing my new perspective on religion with my mother. If I did mention it to anyone, I turned it into some sort of a pastor’s daughter joke. Deep down it wasn’t funny though.

I once walked out of a high school play about the garden of Eden that my then boyfriend, now husband, had invited me to. Shaking with rage, I explained to him how not only was the dialogue crappy, but in this version Eve was wholly blamed for the fall, and how inaccurate and anti-woman it was. He just looked confused. I had never talked about how attending funerals or weddings or services where I’d hear someone preach was a weirdly nerve-wracking experience for me, that even people inviting me to church or questioning my beliefs made me very uncomfortable. When my mother-in-law invited me to go see Mel Gibson’s “The Passion of the Christ” movie, the only possible answer was no.

I didn’t want to explain that there had been a spiritual component to me being dragged across the floor by my hair (headship, disobedience), or having my butt and legs covered in welts from an old leather belt, or living in fear of the red stick (spare the rod, hate your child). I didn’t like to discuss the fact that my siblings and I didn’t have medical or dental care before I turned 17 (trust in the Lord with all things), or that the medical neglect had started when I, the firstborn of my mother’s 9 children, had almost died due to an unexpected breech birth at home, no prenatal care, and unlicensed “birth assistants” from church rather than real midwives. I didn’t want to recall how all childhood injuries and illnesses I had, including a hernia, a broken tooth, and a concussion, were responded to with only “home remedies” and prayer. I didn’t mention how scary it was to be an 8 year old, watching my dehydrated little brother’s eyes roll back in his head, knowing “laying on of hands” is all he would get and if he died of the flu it would have been seen as “God’s will.”

My parents said it was all in the bible, that I’d come to understand. So I read the bible and saw a lot worse things happening, genocide, rape, war, women and children treated as chattel. I told my parents the bible was barbaric and disgusting, like them. I rejected the idea of submission or having some burden due to the sin of Eve. I bluntly said that girls should not be forced to constantly care for their younger siblings just because their parents didn’t properly understand birth control or abstinence. I even *gasp* told my Dad to quit loafing and go put his own cup in the sink. Because of this, and my penchant for responding to abuse with explosive violent anger (using your fists is solely a manly thing apparently), I was viewed as somehow not feminine, not desirable or womanly or any of the things I should be. My parents even told me no man would want to marry me, that because I rejected their ideas that guys too would reject me and go find other, more pleasing, girls. This hurt because, like most people, more than anything I wanted to find love, to feel I was desirable and worthy of love.

The spiritual side of me got put in a trunk with mothballs. There was no other option, really. Spirituality, faith, was just as much a tool for my parents to control and hurt me as the belt or the red stick, or being put “on restriction.” It was safer for it not to exist at all. So I grew up without feeling any sense of faith, without praying, without imagining that there was any higher power, that there was anyone there for me except the real people that I knew, and they weren’t there as often as I needed them, leaving me largely alone with my troubles, ultimately needing to solve them myself. I figure some people would describe this as incredibly sad. Others would say it’s accurate. My take? Heck if I know.

When I stopped believing at such a tender age, I never really revisited it. Well, I did a few times, going to church with friends as a teen, but I wouldn’t attend more than once after learning the same bible verses used to cause pain in my family were blithely being recited or referred to in this church, often in what seemed to be a similar context. This experience would make me so uncomfortable that it only reinforced not questioning or revising my stance. How could I feel safe? It was better to make an excuse and not even approach it, not have my friends think less of me or feel hurt when I said I didn’t want to go back to their church. How could I not like church? Was it because I didn’t respect their choices? Was it because my soul wasn’t right?

For a while I just wished religion didn’t exist. Then nobody would inquire about my “church home,” or invite me to bible study with virgin margaritas, or ask if my family was Catholic. My favorite answer for that last one, before I knew Quiverfull was the name for it: “No, they’re Nondenominational bordering on Southern Baptist with a little Pentecostal and Christian Scientist thrown in.”

My distaste wasn’t just confined to Christianity either. I was pretty rude and dismissive to a (slightly annoying) cousin-in-law who was into Wicca. When a very nice Jewish friend invited me to a Passover Seder, I found the beef brisket and matzo ball soup to be amazing culinary delights (the gefilte fish slightly less so) and the traditions very moving, but I still got a lump in my throat when it was my turn to read about Moses from the Haggadah. When Muslim friends of mine invited me to an Eid al-Adha dinner honoring the day Abraham didn’t kill Isaac, I brought a bottle of sparkling grape juice and thoroughly enjoyed hanging out and eating Egyptian macaroni bechamel casserole, fragrant Afghan rice, and spicy Pakistani mutton biryani, but secretly wished we were celebrating something that hadn’t been used as a veiled threat against me by my parents growing up.

Apparently I’ve always had low-grade PTSD symptoms that could be triggered by religious activities even though to me that was just my normal baseline level. I guess in many ways these issues also manifested as post-traumatic resilience. I had this intensity that helped me learn and remember, a semi-photographic memory, an obsession with literature and the written word, a fascination with learning what made people tick, with picking out errors in an argument. I had a little “bullshit alarm” that beeped in my head. I was also lucky (or perhaps somehow blessed). The few opportunities I had to make things better I took and those turned into more opportunities. It wasn’t because I was being intentionally strategic either, rather that I was truly excited about learning and positive human interaction. I intellectualized things though, I put a wall up, and that wall is definitely still there. So today I am an un-spiritual person writing about spiritual abuse.

January 31, 2013
Spiritual Abuse: A Victim's Guide to Recovery
Next Post