Why Do People “Drink The Koolaid”?

Why Do People “Drink The Koolaid”? January 15, 2013 Suzanne Titkemeyer 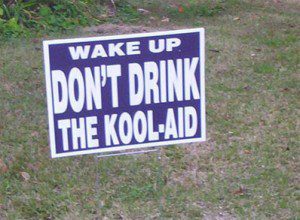 Over at No Longer Quivering they have been talking about why people– and particularly why women– get involved with repressive, spiritually abusive, authoritarian religion.  Why is it, for instance, that so many women are drawn into– and drag their sometimes reluctant husbands into– the anti-feminist “back to patriarchy” movement?

The No Longer Quivering blog post asks it this way:

Are they “drinking the Kool-Aid”? Brainwashed? Deceived? Have Quiverfull women been beaten into submission or bullied by fanatical, power-hungry male pastors? To outsiders, fundamentalist women often seem ignorant, ill-informed, illogical – perhaps even dim-witted or crazy.

Sure committed Christian women are choosing for themselves to live submissively and self-sacrificially – they are living martyrs willingly. But why?!

While I was never in Quiverfull, I did get into the shepherding/dominion movement back in my college years, as I have shared earlier on this blog.  No, I wasn’t bullied into joining or “beaten into submission.”  My initial choice was not made under duress at all, though later, the reasons I stayed certainly included fear of negative consequences (such as being disfellowshipped and having the friends I had made there become my enemies).  But my own reasons for getting into a spiritually abusive Christian movement were like this:

1. It was cool to be part of a group that welcomed me.  I had experienced a lot of rejection from my peers in the school system, and I desperately wanted to fit in somewhere.  The people in this group were so warm and friendly when I went to their meetings, that I could hardly resist the feeling of belonging they gave me.  (I later learned that this is called “love bombing”, and I was taught myself to do it to newcomers that came after me, in order to get them to join the movement).

2.  I really wanted to feel I was part of something bigger than myself, a movement that could actually do some good in the world. The fact that the movement was against things in society that had hurt me in the past (such as bullying, ostracism and sexual harassment in my neighborhood and in the public schools, all of which was now labeled “the world”) was its own justification.  Whatever else it was doing, Maranatha Campus Ministries really was sincerely fighting against these damaging elements in the lives of young people, and offering a kind of Christian community that certainly seemed to be a better alternative.

3. The life of “total commitment” was set forth as God’s perfect plan, and if you embraced it, your life would be much better.  God’s blessings in the form of health and prosperity were supposed to rain down on those who did His perfect will as described by the group leaders.  God’s perfect choice for your marriage partner was supposed to be the result of following the “dating revelation” and having your pastors pray over who you should marry– and your marriage would be guaranteed to be happy forever after, without danger of divorce.  The uncertainties of life could be replaced by certainty.  The troubles that “worldly” people or Christians with weak faith faced, could be avoided.   Prayer and the Christian life became sort of like a vending machine– push the right buttons, and the candy you wanted was sure to pop out.

4.   We were told that these teachings and life choices were God’s will for our lives, and everyone who really wanted to please God would naturally embrace these ideas. I really did want to please God and follow God’s plan.  I wanted to be one of “God’s Green Berets” — a special spiritual force of His favored soldiers, fighting the devil and setting lost souls free.  I didn’t want to be one of the “lukewarm” who never put it all on the line, who never made the grade, who made it into Heaven but just barely, with the smoke of Hell still on their clothes.

5. Having grown up in a dysfunctional home, I thought controlling, authoritarian relationships were normal.  It was what I knew.  As a young college student just out of that home, I felt uncomfortable not having someone to tell me what to do. Being under “a covering of authority” felt safe and secure.

So those were my reasons.  But as far as women and back-to-patriarchy is concerned, I think there’s another dynamic to it, aimed specifically at women.  The guaranteed wonderful life (as I described in #3 above) takes a particularly domestic form.  Modern life can be very high-pressure for women, who feel they should try to “have it all” in terms of career, marriage, motherhood, and material goods such as a beautiful home, nice cars and clothes, including being plugged into all the latest technologies and gadgets.   Quiverfull and the patriarchy movement offer a utopian fantasy of domestic tranquility, away from the rat-race of the business world and the traps of materialism, filled with peaceful living, a happy husband, obedient children, and all the time in the world to practice the beautiful arts of homemaking.  No Longer Quivering blogger Broken Daughters describes it very well in her post, The Polished Lives of Others:

I’d have a pantry filled with homemade juices and marmalade and sauces and relishes. I’d have a beautiful, antique and yet modern kitchen. I’d have a great view from my kitchen windows, and I’d wear a beautiful apron. I’d be… hm. One of those fairytale housewives, I guess.

My life would be quiet, relaxed. I’d be busy decorating a beautiful home, not really worrying about money and how to get by. My husband would be thrilled to see my newest crafty decoration idea and I’d have people come over for tea, who would praise my exquisite taste and the heavenly homemade biscuits. . . .

And yes, my kids. How well-behaved they were, and how clean and neat and obedient and whatnot. How tidy their rooms were, how tidy the house was, how lush the gardens! Yes, I was truly the Proverbs 31 woman.

At the end of the day, my tall dark and handsome husband, who made assloads of money doing something real godly, would put his hands on my shoulders and gently kiss my neck and whisper that I was truly the wife of his dreams and no other even came close to me.

Yes, I would enjoy those moments that made me feel so superior to everybody else.

An idyllic vision of life in which you beat everyone else at the competitive game of “who is happiest” and “who has it all together.”  And it all happens because of God, who stamped the movement with His endorsement and, even if He doesn’t actually love you more than everybody else, at least approves of you more than anyone not in the movement.  That was what Maranatha Campus Ministries offered.  That is what Quiverfull and Biblical Patriarchy offer. In the end, (as Paul Burleson says so well in a comment on Wade Burleson’s blog), it’s all about basic human needs:  to be loved, to feel secure, to feel you belong, to feel special.  Spiritually abusive, authoritarian religious groups offer their movements as the surest way to get these needs met.  Ordinary, non-authoritarian Christianity is set forth as an inferior, flawed system that won’t meet your needs the way we can.  Ordinary Christianity is only just slightly better than “the world.”  But we can offer you the peace, fulfillment and happiness you really want– if you just do things our way, which is God’s way.   Get in on the secret.  Join us.  We guarantee the results– as long as you’re doing everything exactly as we tell you. It’s a heady mix, that Koolaid.  Hard not to drink it, especially if you’re in any sort of emotionally vulnerable state, such as alone in a new place, or going through a difficult life transition. The best defense is to learn in advance what the Koolaid looks and smells like.

That’s why I’m writing this.  If I can play a part in forewarning-and-forearming anyone being tempted to drink, or if I can help anyone who did drink to forgive themselves, then I become part of the antidote.

And that makes it all worth it.

January 16, 2013 Quoting Quiverfull: Men Robbed?
Recent Comments
6 Comments | Leave a Comment
Browse Our Archives
get the latest from
No Longer Quivering
Sign up for our newsletter
POPULAR AT PATHEOS Nonreligious
1