Beyonce in the Hands of Jesus Freaks

by The Crunk Feminist Collective

(Editor’s note: Cross-posted from the CFC site.  Posting it here because it brings up another dangerous theme in Patriarchal Christianity – racism.  Some of the other Patheos bloggers called out their commenters and others on this subtle and not-so-subtle racism that seems to be flourishing in the Fundamentalists, Evangelicals and other forms of Patriarchal faith. Regardless if you agree or disagree with Beyonce as a symbol of a strong woman or the Super Bowl or whatever, this is still a good read! Ties in nicely with our discussions of purity and rape culture.  I love the awesome ladies of CFC. They make me think and sometimes they make me laugh.) 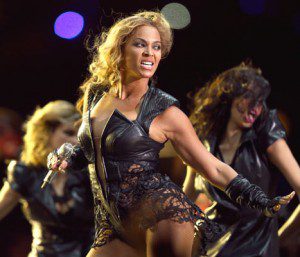 So apparently, Christendom is “uncomfortable” with Beyonce’s performance at this past Sunday’s Superbowl Show.

Well I’m “uncomfortable” with their discomfort.

This post from  David Henson over at Patheos.com, who called out his friends and acquaintances for their thinly veiled racism during the show inspired this FB rant from me:

”Let me say as a Christian how disgusted I am with all this supposed “discomfort” over Bey’s Superbowl performance. It’s a bunch of B.S. What I saw was Girl Power to the max. And I find it interesting that this narrative about how the nation is going to hell in a hand basket always happens on the sexy, powerful bodies of Black women. Janet Jackson/Beyonce’. Was this a national conversation when Madonna/Nicki Minaj/M.I.A. were on stage last year? I mean I know the church gets its panties in a wad at Superbowl time every year, although I wish it’d get its panties in a wad at the explosion of sex-trafficking or at the serious spike in domestic violence calls that happens during the Superbowl. But I guess a grown-ass, married woman is a more likely target. And since the conservative church has by-and-large said that sexuality is only properly expressed by married people, I’m at pains to understand how Beyonce’ violated the rules. She’s a sexual being, as are we all. But she did it “the right way,” and now folk are still trippin? Go.Sit.Down. No seriously have any one of several seats.

This is why I can’t deal with the Church on many days, because the failure to having an *INTERSECTIONAL* analysis of the ways that racism and sexism deeply inform stuff that Christian folk are taught to think is merely “moral” gets the hell on my nerves. And if you don’t know what “intersectionality” means look that ish up, since the most well known Black women academics have been talking about it for nearly a quarter-century at this point (much longer than that actually.) And that is why, although I really appreciate the piece linked [above}, I am deeply disturbed by its “gender-only” analysis. King Bey didn’t just represent girl power. It was a representation of Black Girl Power, and I am absolutely positively clear that the Church — Black and White (in particular)– is deeply uncomfortable with all things female, but all things Black female that are steeped not in shame, but in power and self-possession? Fuhgedaboutit. And that is why I don’t have not even one cotton-pickin minute (yeah pun intended) for folks who have old conservative ass theology devoid of any social analysis, because it causes them to come to ridiculous conclusions about what happened on stage. Anyway, I’m done. Seriously just done with Jesus’ people today!”

(Yeah, I know I be doing too much on Facebook. So sue me.)

Let me also note that there seems to be serious disagreement with the claim about increased domestic violence and sex trafficking during the Superbowl, so I have provided those links here. However, what we can all agree on is that a national celebration of male violence and aggression, otherwise known as “sport,” certainly has implications for the culture of violence against women, girls and gender non-conforming folks in our country. What those implications are is less clear.

Anyway, apparently many folks were outraged at what I took to be a deeply thoughtful analysis from Henson. So he came again with this very thoughtful reply to the scores of people who commented on that first post using the as he calls it, “what-about-the-children” defense.

In part he said,

“The overwhelming criticism I received deployed a familiar argument against certain kinds of media — the “What about the children?” defense. They argued that Beyoncé’s performance wasn’t kid-friendly, or analyzed the cut of her leotard or whether her costume was too revealing. [….] Please forgive the strong language, I think I have to be careful if I attempt to understand an adult through the lens of a child and I think I need to be even more careful when asking a performer to take in mind how what they do will affect my children. This is particularly fraught where Black women are concerned, in my opinion. Black women are not the minders of white people’s children (overwhelmingly this comment came from white people). For me, (maybe not for you?), this hits too closely to asking Beyoncé, an independent, strong woman, to perform as a veiled Mammy. In the end, though, I am responsible for what my children watch, not Beyoncé.”
Touche’, Mr. Henson.

Henson goes on to engage with a post from Dr. Christena Cleveland, a self-identified “African American evangelical” who shared her own thoughts on the performance.  Although I admire the sister for attempting to bring an intersectional analysis to this whole thing, but there were a few problems.

She argues: “yes, Beyonce was handed the mic; anyone with a sociological imagination knows that Beyonce was on stage only because powerful people  – e.g., those who produce the Super Bowl – decided that it was in their best interest to grant her access.” In other words, Bey’s performance took place not under conditions of her own making and should therefore be seen as oppressive.

First, since Bey doesn’t own the NFL or the Superbowl, being asked to perform at the event would never be solely up to her. That being said, at the point where she arrived on stage with all-female, all women’ of color band and made history as the first all female show in Superbowl history, I think it is fair to say that she absolutely transformed much of the “oppression” that is the half-time stage.

Second, reference to Bey as a “house nigger,” is really bad argumentation, based on equally dubious scholarship. There is nothing about a slave analogy that works here. Now I agree with Dr. Cleveland that we need to interrogate the ways in which white male desire commodifies and hypersexualizes the bodies of Black women. That is a perennial and enduring problem. But how the commodified white gaze turned Bey into a “house nigger,” is simply beyond me.  The Church is badly in need of an intersectional analysis, a new politics of pleasure (to quote Joan Morgan), and a theology that doesn’t stifle the possibility and potential of Black girls, because we refuse to tell the truth about the racist and sexist root of social anxieties. So when we bring it, we need to make sure we come absolutely correct.

Bottom Line: I am really tired of the American Church conflating its age-old anxieties with the bodies of Black women, anxieties born out of sexist and racist presuppositions, with calls for conservative morality. The African American Church, in particular, has come to think that the respectability politics around proper public moral self-presentation that we created as a strategy for negotiating a violent post-Emancipation world is synonymous with a theology for living. The White Church needs to grapple with its sexualized racism and racialized sexism. Lorde help them.

It’s all  bad theology and it amounts to an unholy policing of Black women’s bodies in the name of Jesus. I rebuke all of it.  #thedevilisaliar  #andaintnotruthinhim

If the Church purports to be the“pillar and ground” of truth then it better recognize. Because trippin on King Bey and the awesome show of Black Girl Power that was Sunday night is not the way to a vote for relevance.

February 11, 2013 Quoting Quiverfull: Friendships Like Water?
Recent Comments
3 Comments | Leave a Comment
"Found the study they were mentioning! https://pubmed.ncbi.nlm.nih...I know the original article wasn’t in English, but ..."
Cynthia When Quiverfull Makes Up Medical Advice: ..."
"She's underaged, he's 18 and wants to do life threatening things to her. That is ..."
Saraquill Isaac Anderson’s Chats
"for what though ? For me that sounds like someone with a crush on a ..."
Melanie Groß Isaac Anderson’s Chats
"If you did I'll just remove all but one. Sometimes Disqus is buggy as heck."
Suzanne Harper Titkemeyer Is There a Looming Sex Scandal ..."
Browse Our Archives
Follow Us!