Corporal Punishment and The End of The Red Stick 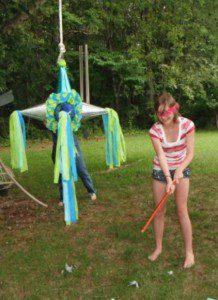 This picture could be anybody’s little sister blindfolded and hitting a piñata at her Dad’s house for another sibling’s birthday. But it isn’t. It’s my little sister. She lives in a different world than I did. One with her own bedroom and court-ordered visitation and Christmas presents from a kind stepmother. She has never been homeschooled. She does not remember a time when our family didn’t celebrate birthdays, or was too poor to buy a piñata, or was too “modest” for her favorite summer clothes to be allowed.

She could be using any stick to hit this piñata but she isn’t. She’s using the “red stick,” the most infamous spanking implement our family had. As far as I know, none of the younger siblings attending this party were ever touched by the red stick and I imagine just a few had been threatened, but the grim knowledge of what it was used for had been passed down.

The red stick had started out as a handle to a child-size broom and then when the broom broke 25 years ago, it became a toy (a walking stick, a bat, a pretend sword) left in the yard until my Dad picked it up off the patio one day, tapped it against his palm a few times and said “this would make a real good spankin’ stick.” Then it became something totally new. An object of fear. It stayed hanging on a nail or propped in a corner in my Dad’s bedroom or office for years except when it was picked up and used to threaten or to leave welts.

“Do you want a spanking? Don’t make me get the red stick.”

Mom catches one sister padding her underwear with toilet paper in anticipation of a beating. After that, its bare bottomed.

“Pull down your pants. Bend over.” Red stick.

“But I don’t want to try and eat a pickled pig lip out of that jar, Dad. It looks just like a pig’s lip.” “If you don’t try it, you’ll get the red stick. You’d better eat it and like it.” Tears. Gagging. Spitting chunks of pickled pork into the sink. Red stick.

It strikes me that this photo is the only known picture of the red stick. The only official proof of it ever existing or being used is in a pleasant scenario. As it happens, the red stick finally died that happy day, broke while connecting with the piñata and ended up in the garbage.

A sibling sent me a message informing me that the red stick had met it’s end and that when Dad was out of range, they had celebrated it’s demise. I was glad too, glad it was gone and that it did not die the way I had always imagined it would – splintering into pieces over a child’s behind. It would never be used to hurt anyone again and it had broken being used the only way it should have ever been used, in the original spirit it had once had – innocently in child’s play.