Happy is the Man That Has His Quiver Full of Them 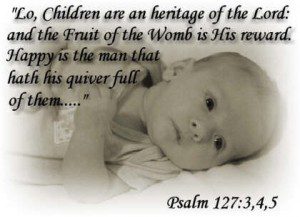 When Polly and I married in 1978, we planned to have three children.  We wanted to wait a year or so before we started having children, but six-weeks into marriage Polly became pregnant. Our son Jason was seven weeks before our first wedding anniversary.

In 1981, Nathan was born and in 1984 Jaime was born.  Three sons. We wanted a girl, but we took having three boys as meaning God didn’t want us to have a girl.  We had the three children we planned on and we decided not to have any more.

In 1988, my doctrinal beliefs changed dramatically. I abandoned the doctrine I grew up with and was taught in college and embraced five-point Calvinism.  As I began to read the Puritans and more modern authors like Martyn Lloyd Jones, A.W. Pink, J.C. Ryle, and Rousas Rushdoony, I came to the conclusion that God’s sovereignty over my life included how many children my wife and I were to have.  As I later learned from Calvinistic writers like John MacArthur, if Jesus wasn’t Lord of all is he wasn’t Lord at all.

We came to see that children were a blessing from God and, as the Bible says, happy is the man who has lots of children. ( As arrows are in the hand of a mighty man; so are children of the youth. Happy is the man that hath his quiver full of them: they shall not be ashamed, but they shall speak with the enemies in the gate. Psalm 127:4,5 )  If God wanted us to have one more or ten more children, we were willing to have them.

It was not hard to convince Polly that this was the will of God for us.  Polly loved being a mother. Whether she was just a product of the time and our religious beliefs or she really loved having lots of children, (or maybe both)  Polly was a dedicated, hardworking, loving mother.

When we told Polly’s Mom that we intended to have more children she was incensed. She told us, you can barely take care of the children you have. How will you take take  care of any more?  I told her, God was sovereign over our lives and we would trust him to provide.

For a time, things were really tense between Polly and I and her Mom. It got so bad that we wrote her a letter and included the book we had read about not using birth control. We told her that it was our life and she needed to respect our wishes.

In retrospect, Mom was right. We were in no position to have any more children. We were living in SE Ohio, pastoring a new Independent Baptist church. (I started the church in 1983) The church was growing rapidly and reached a high attendance of 200 in 1988. But, most of the people in the church were working class poor, The most money the church took in was 40,000.00.  We were  quite poor and had to rely on Medicaid for insurance and Food Stamps to eat.

But, God was sovereign and in December of 1988, Polly got pregnant.  Here’s one thing Polly and I knew….she was a rabbit. All I had to do was look at Polly and she would become pregnant. Each time we decided to have a child it was only a matter of a few weeks or months before Polly became pregnant.

In  September of 1989, Bethany was born. Our first daughter.  And she had Down Syndrome.

Do you see a pattern? Can you imagine how many children we might have had if reason and common sense had not intervened?

What where we to do? God is sovereign! God is in control! Surely, God could protect Polly if she got pregnant again!

Over the course of the next few months, we spent many hours talking about our future and having more children.  We finally decided to listen to the doctors and so we began using birth control again.

For a time, we felt guilty. We thought, we are disobeying God. Where is our faith?

In the end, in spite of our theological beliefs, we put our faith and trust, not in God, but in doctors. As we look back on it now, perhaps this was the first small crack in our Evangelical Calvinistic worldview.

We now see how foolish we were and how dangerous certain beliefs were.

We are blessed to have six wonderful children. We love all of them dearly. But, if we had to do it all over again, knowing what we know now, I doubt we would have had six children.  Health and economics should have been the criteria we used to determine whether or not to have children. Instead, we let the folly of youth and our religious beliefs determine what size of family we wanted to have. We are fortunate things turned out as well as they did.  I can only imagine how life might had been if Polly had died having child seven or ten.  I am grateful that the wife of my youth is alive and we are able to enjoy together the latter years of life.