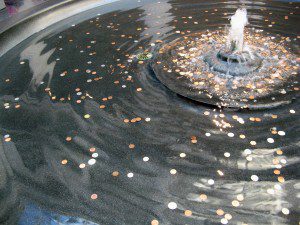 I have, over the course of years that I’ve been a Christian, changed the way I think about a large number of things.  Some of the beliefs I used to hold caused me to treat people (or even myself) in ways that I’m sure now were not what Jesus wanted.  Though I’m sure I have His grace and forgiveness for these things, that doesn’t change the harm I now believe I did.  So here are some of my regrets.  Some of them, as I look back, make me laugh or shake my head; others make me very sad.  If anyone who reads this was affected by any of these things, I hope you already know how truly sorry I am.

So here, in no particular order, are my Wish-I-Hadn’ts:

I wish I hadn’t kept bothering my Catholic co-worker with invitations to my church’s events, even though she had told me she had her own faith.  I thought I was trying to get her away from a false religion.  She thought I was just plain annoying.

I wish I hadn’t had my pastor preach a how-to-get-saved sermon at my wedding, to the captive audience of relatives and friends who had only come to see me get married.

I wish I hadn’t told my non-Christian co-worker that all men liked to be the leaders in relationships, and it took a strong woman to let them.  She didn’t say anything, just gave me a funny look.

I wish I hadn’t told a good friend who was engaged to be married, that she shouldn’t marry the man because he’d been divorced.  We were never good friends again after that.

I wish I hadn’t made friends with a girl in college for no other reason than that I wanted to convert her.  I’m glad she never found out.  (She also never converted.)

I wish I hadn’t bought into the idea that any music with a rock beat– even Christian rock– was of the devil.  I wish I hadn’t thrown away my Neil Diamond records, my Simon and Garfunkel , and even my Imperials gospel albums.

I wish I hadn’t participated with the rest of the Christian audience at a creation vs. evolution debate, in jeering, booing and hissing the evolutionary scientist, so that he went away knowing Christian audiences had no kindness, no manners and no willingness to listen to points of view other than their own.

I wish I hadn’t listened to my pastor when he told me it could damage me spiritually to go see The Return of the Jedi— so that I didn’t find out until years after the final movie appeared in the theatres, how the Star War series ended.

I wish I hadn’t given my dad the book Evidence that Demands a Verdict for his birthday, instead of giving him a present he would have really enjoyed.

I wish I hadn’t written my Christian friend who came out as gay, a letter that he never forgave me for– a letter so judgmental and so ignorant of what he was going through, that we never spoke again.

I wish I hadn’t rejected a nice shirt my mom gave me as a gift, because the picture on it looked a little “New Age” to me.   I wish I hadn’t conveyed my judgment against this shirt and my lack of gratitude to my poor mom so very plainly.

I wish I hadn’t treated Christians who went to other churches– including my own sister!– as if they just weren’t as spiritual or enlightened as we were.

I wish I hadn’t been so conscientious in my duties towards younger members of my church that I was supposed to be “discipling”– but had just let them know that I’d be there for them if they needed anything, and otherwise had just let them live their lives without my oversight or interference.

I wish I hadn’t joined the others in my church in shunning those who decided to leave.

So there it is.

Perhaps we all ought to let that be our litmus test.

February 7, 2013 Quoting Quiverfull: Role of a Help Meet?
Recent Comments
8 Comments | Leave a Comment
"I've seen similar stories from survivors, which I think is a better word than recovered. ..."
persephone Christians Finally Speaking Out Against Sean ..."
"Since some people are actually saying it seriously, and since I'm in real fear for ..."
argyranthemum Jill Rodrigues Does Not Want You ..."
"Why can't they just live their lives according to Christian principles without bothering the rest ..."
Friend Christians Finally Speaking Out Against Sean ..."
""It’s more silly performative Christianity that seeks to promote self."Exactly, Suzanne. "Christianity as performance art" ..."
DoctorDJ Christians Finally Speaking Out Against Sean ..."
Browse Our Archives
get the latest from
No Longer Quivering
Sign up for our newsletter
POPULAR AT PATHEOS Nonreligious
1