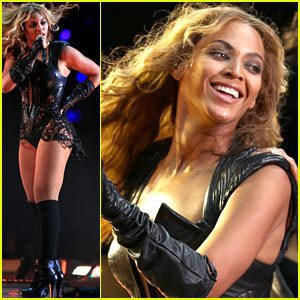 by Sarah Over The Moon

I didn’t watch the Superbowl, this year (or…any year) but conversations about Beyoncé’s halftime show caught my eye. On one hand, many felt that Beyoncé’s display of all-women power and sexuality was inspiring and empowering. David Henson even went so far as to call it prophetic (and I agree):

It was a dance of defiance.

For 14 minutes, women were owned by no one. Instead, for those few prophetic and powerful minutes, Beyoncé and the women onstage with her owned the night.

Last night, men, misogyny, objectification, or sexism didn’t win, even though they got most of the airtime.

Others brought up valid criticisms, saying that they did not feel empowered by the performance and questioning what displays of power are allowed in the Super Bowl. Could a woman artist get on stage and display a less overtly sexual type of power? Probably not, and I think we do need to talk about other ways that power can be expressed.

What I can’t stand, however, are people who call themselves feminists or progressives who spent the next day shaming Beyoncé, and I saw plenty of that as I watched the Twitter response pouring in. Many said that Beyoncé objectified herself because of the way she was dressed and the way she danced.

Though I think we need to have a conversation about how few images of women are presented in the music industry, right now, I just want to talk to those progressives.

These bodies were not made for men to conquer, steal, and objectify but for women to be.

Many, if not most women have sex from time to time using our bodies. Often we are sexual with our bodies or we use our bodies to be sexy.

This does not make us objects. Objects don’t have sex.

Men are often seen as more human, as REAL men when they are sexual, while women are accused of objectifying themselves.

But I repeat: Objects don’t have sex.

Objectification does not happen when a woman like Beyoncé decides to use her sexuality to be powerful. Objectification happens when Audi commercials show a teenaged boy kissing a teenaged girl without her permission and displaying that as bravery. Objectification happens when men doing something sexual to a woman is put on the same level as a man driving an awesome car–when women are seen as nothing more than a product to be owned as a mark of manhood (note: women often objectify men and same-sex couples objectify one another. I’m speaking about the context of the Super Bowl and patriarchy, though often the situation is more complicated).

Objectification is something one person does to another person.

Objectification is treating someone as less than human, as if their body is nothing more than a thing to be claimed or conquered or bought.

Beyoncé went on stage last night and showed the world what a talented and powerful woman she was. She sang lyrics about independence and men not being ready or able to handle her body.

Did some men ignore her songs about women’s power and independence and choose to see Beyoncé as yet another object that they could conquer in their fantasies? Undoubtedly.

But I fail to see how this was Beyoncé’s fault.

“She shouldn’t have been dressed like a Victoria’s Secret model.”

“Her dance moves were too sexual and just made men fantasize about her.”

Feminists and progressives, do you not realize how you sound?

I’ll tell you how you sound by quoting a conservative Christian dating book that I am reading for my research project on rape and Christianity:

“If you dress like a piece of meat, you’re going to get thrown on the barbeque.”

You sound like the same culture that is telling women that dressing immodestly is like waving money around asking for people to steal it. You sound like the authors who tell teenage girls that they lose their value and dignity when they have premarital sex.

I’m done with this idea that every time a woman presents her body to the world, men get to assume “that was for us.” And you’re naive or willfully ignorant if you’re going to try to claim that objectification would not have happened had Beyoncé been more “covered up.” You’re wrong if you think a different outfit would have made a difference in carrying Beyoncé’s message.

The truth there’s nothing a woman can wear under patriarchy that will prevent patriarchal men from trying to control their bodies.

Muslim women are accused of submitting to patriarchy for covering their bodies. Beyoncé is accused of submitting to patriarchy for showing hers. Even as she’s literally singing lyrics about how men wouldn’t even be able to handle her body, men think they can claim it as an object for themselves. To say that her performance is what caused men’s objectification of her is the same talk as modesty culture which says that women must dress a certain way to keep their brothers from stumbling.

Sarah Over The Moon blogs at Sarahoverthemoon.com

February 7, 2013
Quoting Quiverfull: Role of a Help Meet?
Next Post