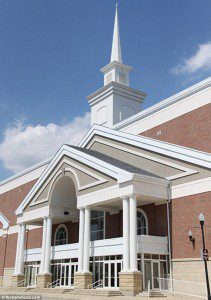 Linda Murphrey is the daughter of the late Jack Hyles. What follows is an excerpt of an open letter Linda wrote to First Baptist Church in Hammond, Indiana. I hope you will take the time to read the entire letter on Linda’s website:

…There were thousands of wonderful people at FBC when I was there from 1959-1983. You made me feel like a princess and gave me the sense of “specialness” that I needed. Thank you for loving me, for loving our family. No one ever knew what went on inside the walls at 8232 Greenwood Avenue,  Munster, Indiana. So you had no way of knowing how much your love and kindness was sustaining me, my siblings and my mom. But it did. Although I felt the stress of being on display at church, I also felt very loved within the church walls of 523 Sibley Street, Hammond, Indiana.

Many of you arrived at FBC after I left in the early 80’s and never met me. In fact, quite a few people have written to me recently and mentioned that they never even knew I existed. They didn’t even know there was a fourth Hyles child! That’s sad, but understandable. My dad felt disgraced by the fact that I left fundamentalism, his kingdom. I never left God and never will, but that wasn’t good enough.  I left him – and that was unforgiveable. So it was as if I had died, thus no more mention of Linda and now many of you being surprised that there even IS a me!

Things changed through the years at FBC. My dad changed through the years. You saw it. You knew it. Even if you stayed, even if you are still there, you can’t deny that things got weird. You may not say  it out loud, but you thought it. We all did. And it’s why I had to leave. As I’ve said publicly, based on the definition of a cult, I believe my father’s church evolved into a cult. Everything revolved around my dad as he used God and the Bible merely as tools to glorify himself.

When I was in my mid-twenties, I remember sitting in that huge auditorium one Sunday morning and carefully observing you – the people in the congregation – and the looks in your eyes scared me. As I mentioned in the recent Chicago Magazine article, you looked like zombies – sounds extreme, but in that moment as I looked around me, it was extreme. It had gone beyond just intently listening to your pastor. It had gone beyond merely ingesting a sermon. It had crossed over into complete worship of your pastor. You were spellbound. You were in awe. You were mesmerized. Not by Scripture. Not by God. Not by Biblical teaching. But by a man. Jack Hyles.

The adoration in your eyes wasn’t in my eyes. It was not something I could give to this man, to any man. The blind loyalty, a loyalty he convinced you was a necessary part of serving God, was not something I was willing to offer. The twisting of Scripture to fit into his own agenda was more blatant and disturbing than ever. The control over “his people” was frightening to me.

Linda has a book coming out soon. You can find information about her book here.

Here is a video of Linda’s talk she gave at TEDx last year.

March 25, 2013 Quoting Quiverfull: Sissified?
Recent Comments
2 Comments | Leave a Comment
Browse Our Archives
get the latest from
Nonreligious
Sign up for our newsletter
POPULAR AT PATHEOS Nonreligious
1