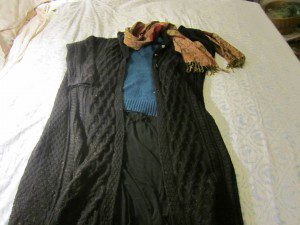 For years I’ve sworn that going to my local Wal-Mart was sort of like visiting a circus freak show, a pageant of the trans-mundane. While I hate shopping at Wal Mart because I feel like I’m approving of and funding the general atrocities of the corporation on small town America and the people working there.  There are always the weirdest people you’ve ever seen shopping at Wal Mart. Once I was in a checkout line there and the little boy ahead of me kept trying to get his momma and grandma’s attention, telling them he was feeling sick. They ignored him, he turned and threw up right on my shoes and ankles. Going to Wal Mart is like spinning a roulette wheel of weirdness even if it is a good place to people watch if you want to see the odd.

Being that in some ways it’s the only game in town in my small town I end up there much more often than I would like.

But… Wal Mart anywhere is one of the most interesting people-watching places you can find. Want to see a women wearing all camo right down to makeup with a blue mohawk riding around in a wheelchair? People with huge Nascar tattoos? Questionable clothing choices? Wal Mart is your fascinating place!

So I made the choice to wade into that sea of humanity that are the customers of Wal Mart wearing my hijab just to see what type of reactions I would get. Some very uncomfortable people watching.

Once I pulled into the large parking lot in front of my local Wal Mart I was not expecting any reaction till I parked and went into the building. Not so, as soon as I was driving in front of the store looking for a spot a lady who’d waited for the cars in front of me pulled out in front of me, honked and flipped her middle finger at me. Not a young lady either, I’d say possibly 60ish with a grimace on her face. I almost hit her car he movements were so sudden.

Just getting out of the car and walking the lot on a busy Friday invited lots of stare/glare/ignore. But once I was actually in the store I was less aware of people doing that. Most everyone seemed focused on getting that giant pack of mac and cheese or Doritos than wasting time paying any mind to other shoppers.

I did run into a few people I know. One being a pastor at my church, Nancy and we chatted for a few minutes about our animals after I explained to her what I was doing there wearing a veil. I always feel odd telling people I know well what I’m up to and waiting for their remarks, good or bad. Thankfully Nancy is an interesting individual with an open mind.

That can’t be said of everyone I know. Not ten minutes later I ran into someone from my old church that I used to know well. They made some remark about knowing my faith had always been faked and this is proof of it. I am still waiting to hear the gossip from the hateful fundamentalists at the old church branding me a ‘moooslim’ and a ‘terrorrist” (their pronunciations). At least if they’re talking about me they are leaving someone else alone.

As I was trying to get to the checkout I passed two couples talking. The clothing worn by all had either Nascar insignia or something to do with Skoal or John Deere. I got death glares and ugly muttered insults as I passed. Typical rural viewpoints. It’s always the redneck types that seem to be the majority of the negative reactions.

It’s weird, it’s almost as if you cease to be a human in eyes of some people when you don the hijab, you suddenly morph into an ‘it’ that has a certain portion of the population acting as if that gives them the right to act like you’re just the devil incarnate or some evil trinket like a voodoo doll, something much less than human.

How can mere clothing strip you of your status as a human?

Managed to get out of there without much more than the stare/glare/ignore. That I can live with.

Calulu lives near Washington DC , was raised Catholic in South Louisiana before falling in with a bunch of fallen Catholics whom had formed their own part Fundamentalist, part Evangelical church. Infamous for telling Jimmy Swaggert to go F**k himself back in 1981. After fifteen uncomfortable years drinking that Koolaid she left nearly 6 years ago. Her blog is Calulu – Seeking The Light  and The Burqa Experience

March 17, 2013 Quoting Quiverful: Mental Health?
Recent Comments
8 Comments | Leave a Comment
"I was an adult bully. That is one of the reasons I never married. I ..."
nmgirl Lori Alexander, Voddie Baucham and Racism ..."
"Plus, um, some women DO want to be a little more in charge of things? ..."
The_L1985 Suzanne Venker, Gender Genocide, Toxic Masculinity, ..."
"Only reason I would is to pull an Anna Nicole Smith: marry someone rich, but ..."
The_L1985 Suzanne Venker, Gender Genocide, Toxic Masculinity, ..."
"Happened to my grandfather. For a few years my grandmother had to stretch an Army ..."
The_L1985 Suzanne Venker, Gender Genocide, Toxic Masculinity, ..."
Browse Our Archives
Follow Us!