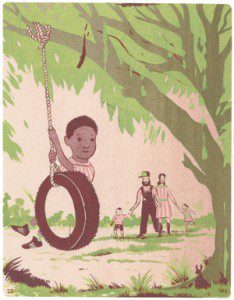 Mother Jones magazine has finally published Kathryn Joyce’s account of the Evangelical Movement’s obsession with adoption and the inevitable not so great outcomes when you don’t take practicalities of foreign adoption under consideration.

Surely you remember not too many years ago when Nancy Campbell was pushing everyone who was Christian and could possibly afford it to adopt babies from the war-torn African nation of Liberia? She adopted a number of them for her and Colin to raise. But the saddest stories of Liberian adoptions in Kathryn’s article involve Nancy and Colin’s daughter Serene and her husband Sam.

In October 2006, a year after their first Liberian adoptions, the Allisons adopted another pair of siblings: Kula, 13, and Alfred, 15. “In Africa we thought America was heaven,” recalled Kula, who is 19 now. “I thought there were money trees.” Primm Springs was a rude awakening: It was dirty, she recalled, and she had no toothbrush. The new house Sam was building—with the older kids working alongside him—often lacked electricity. There was only a woodstove for heat, and no air conditioning or running water yet. Toilets were flushed with buckets of water hauled from a creek behind the house. The children recalled being so hungry that they would, on occasion, cook a wild goose or turkey they caught on the land. “We went from Africa to Africa,” CeCe said.

They didn’t attend school, either; home schooling mostly consisted of Serene reading to the younger children. When the older kids watched a school bus drive past on a country road and asked why they couldn’t go, they were met with various excuses. So Isaiah and Alfred worked with Sam in his house-painting business or labored in Nancy Campbell’s immense vegetable garden while CeCe, Kula, and Cherish cleaned, cooked, and tended to a growing brood of young ones. It was also the job of the “African kids,” as they called themselves, to keep a reservoir filled with water from the creek. CeCe hadn’t yet learned to read when Serene gave her a book on midwifery so she could learn to deliver their future babies. “They treated us pretty much like slaves,” she said. It’s a provocative accusation, but one that Kula and Isaiah—as well as two neighbors and a children’s welfare worker—all repeated.

Discipline included being hit with rubber hosing or something resembling a riding crop if the children disrespected Serene, rejected her meals, or failed to fill the reservoir. For other infractions, they were made to sleep on the porch without blankets. Engedi, the toddler, was disciplined for her attachment to CeCe. To encourage her bond with Serene, the Allisons would place the child on the floor between them and CeCe and call her. If Engedi went to CeCe instead, the children recalled, the Allisons would spank her until she wet herself.

…and things sort of go downhill from there.

ULTIMATELY, all but 3 of the Campbells’ and Allisons’ 10 adoptions ran into serious problems. They were purged for a time from Campbell’s website, prompting readers to gossip about the family’s “disappearing children.” In a 2009 video, Serene claimed that the missing adoptees were off at school. Campbell’s biography was amended to say she had adopted “some” Liberian children.

In response to specific questions for this story, Sam Allison responded with a blanket email dismissing the children’s allegations as “lies and untruths.” Nancy Campbell conceded that Serene “did have some problems with her older children (who were adults) and wanted their independence immediately…She embraced these children as though they were from her womb and it was terribly painful for her to be rejected by them.” Only one of her own adoptions failed, Campbell said.

Calulu lives near Washington DC , was raised Catholic in South Louisiana before falling in with a bunch of fallen Catholics whom had formed their own part Fundamentalist, part Evangelical church. After fifteen uncomfortable years drinking that Koolaid she left nearly 6 years ago. Her blog is Calulu – Seeking The Light and The Burqa Experience

April 17, 2013 Quoting Quiverfull: Struggling Adult Daughters?
Recent Comments
17 Comments | Leave a Comment
Browse Our Archives
get the latest from
Nonreligious
Sign up for our newsletter
POPULAR AT PATHEOS Nonreligious
1