Abusive Theology, Oklahoma and Us

Abusive Theology, Oklahoma and Us May 24, 2013 Suzanne Titkemeyer 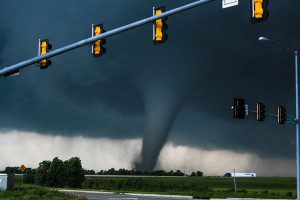 by Joel L. Watts crossposted from The Huffington Post

It would seem when John Piper tweets, the world takes notice in much the same way it notices the words Pat Robertson says — with much gnashing of teeth. Almost immediately after the monster of massive currents touched down in Moore, Okla, John Piper tweeted Job 1.19: “and behold, a great wind came across the wilderness and struck the four corners of the house, and it fell upon the young people, and they are dead, and I alone have escaped to tell you (ESV).” He would quickly delete this, although the image is seared into the caches of a thousand search engines and the minds of hyperventilating Christians who latched onto this statement as a sign of the horribleness in Piper’s heart.

No doubt, Piper and others who would take advantage of this tragedy to tout a god many no longer believe in do indeed have something wrong with their heart. But he is more in line with the original authors of Job than we might like to think. There is serious doubt as to the originality of the prologue and the epilogue, as such genres as the protestations of the innocent are found in other literary groups of the time but absent the narrative structures. So, what if these are not original? What we have is a righteous man who suffers at the hands of an absent, angry god. If you strip away Jewish and Christian interpretations along with the non-original narrative features of the Book of Job you are left with a story of a man who is struck with complete misery for no reason, afraid to cry out to his god because the same God may inflict more harm. What is more abusive than a God who only shows up to inflict more harm?

To be blunt, it’s his followers as they are the ones who stand around to either gloat over the destruction of the perceived unrighteous or worse, pretend to have the power to call down the destruction themselves. With broadcasts, books, tweets, or other avenues of social media travelled, these pseudo-prophets of today pretend to have a different theology than Westboro Baptist Church and glory in what they understand to be their answer for God to strike down the sinners, to finally show himself to a world they believe are anti-God.

But, abusive theology comes in many forms, as do all forms of abuse. Just as there is physical, emotional, and sexual abuse, spiritual abuse exists. Sometimes we see it, as we have with John Piper and Pat Robertson, suggesting that this tragedy was deserved. This is a way to scare people into praying or tithing more and stripping away what humanity means in some effort of purity. Other times it is in the local congregation, buried deep in long forgotten Appalachian hollows blackened by deserted coal towns where people are forced to act a certain way, with the threat of public humiliation awaiting them if they disobey the pastor — or worse. My former pastor used Hebrews 13.17 as a way to suggest that if we disobeyed him, he would keep us out of heaven. Whether it is hidden or in plain sight, spiritual abuse, resulting from abusive theology, is accompanied with the same idolatrous notion of an intimate relationship between the leader and some angry god appeased only through strict obedience.

In my recent collaborative effort, my co-editor and I asked a group of bloggers and others who have come through forms of abusive theology to share their stories. What we discovered is that it does in fact come down to one thing — control by fear of being ostracized. Many of us who come from the same background Piper has put forward believe that when tragedy strikes, it is deserved, even if it is children who suffer more so than others. Sadly, even while I have tried to escape my past by hiding in the United Methodist Church, these tinges of “God has punished them” flare up in me from time to time. I understand fully the abusive theology of Piper because I used it and I have had it used on me. If you dare step out of line, you will be punished. God will cut you down.

This abusive theology comes from a rather dark place in each of us. Some of us have learned to control it or ignore it or overcome it. Others use it for gain. Like the original author of the Book of Job we begin to wonder why bad things happen to good people. Why do the children who are always our innocents die in such horrific ways? Why do the righteous suffer? These questions are natural, and more, I think, a method of spirituality we need to explore. It is only when we shut down these questions in ourselves and others do we urge this darkness to take over. This darkness is our need to control everything, and the human need to apply a reason and a cause to everything. We are not a species that can easily allow random acts. If we are like the author of Job, then we can question freely and even shout against God when bad things happen, but if we are like the final redactor of Job, then we need to apply an angry god who likes to treat his creation like chips on the poker table and we are quite happy with that.

What we must do, even in reacting to the John Pipers of the world, is to make sure we do not fall into his trap. I fear many of us waited patiently, as patiently as they do for tragedies as signs of God’s judgment, to see what they might say in order to issue our responses. This is our abusive theology, our need to judge them as harshly as they judge the dead. In the end, we must ask ourselves whether we are any better than Piper, Phelps, and Robertson if our first instinct is to ridicule a retracted tweet rather than offer a graceful hand of reconciliation.

May 24, 2013
"Defrauding" or How Men Can Keep Women From Stumbling!
Next Post