Created To Be His Slave

Created To Be His Slave May 2, 2013 Suzanne Titkemeyer 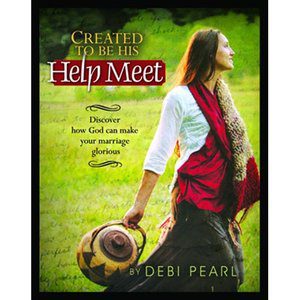 On the No Longer Quivering blog, I have been enthralled read to read the female view of Created To Be His Helpmeet (CTBHH), by Debi Pearl. For any that don’t know what this book is, it is a manual for women to learn how to become totally dependent on a man and how to become a good victim if the man is a jerk. Debi’s teachings flow from the Quiverfull, Patriarchal and Lordship Salvation movements. This book predates the full blown movements, but has helped move them along. I wouldn’t be at all surprised to find out that her husband, Michael, ghost wrote the book and just uses her name to sell it to women.

The Pearls themselves run No Greater Joy Ministries, a non profit that takes in over $1.5 million a year. They preach, write books and generally peddle their brand of thinking all over the world. They are as insidious as the Gotthard ministries. I first heard about them in the 90′s when they printed the book To Train Up A Child. This book took over our church like a storm. It was the modern day equivalent of Jack Hyles’ How To Rear Children. I never read it, even thought I was given a copy when I got married. I didn’t need it, I already had all of the answers. Ha, ha, was I ever wrong.

In 2004, the Pearls released CTBHH. This book was a resounding success in our group of churches. These ideas were nothing new, though; they had just been codified and sold, which made them fresh. My wife grew up in a home where she was trained from an early age that she needed to please her husband. I grew up in a home and was taught that my wife needed to please me, since I was her head. I never truly believed what all of that entailed. What I saw was southern plantation/western ranch ideas on how women should be treated mixed with religion. Basically, women were there for housework and sex and this could be proved by the Bible. Even though my parents taught me this, that whole idea didn’t truly work in our house. Mom was pretty openly rebellious to Dad’s ideas, though in the end she did wear dresses and cover her head.

Wile courting my wife, my parent’s extreme ideas moved to her family. My future mother-in-law began wearing dresses and a head covering, and having her girls wears dresses as well. (I have to say that I saw more of the feminine form in tight dresses then I would have ever seen in pants.) so, my future wife became primed to follow me blindly, although she thought I wouldn’t make hear wear a head covering. Unfortunately, she was wrong.

When we got married, she tried to follow the whole helpmeet idea found in Proverbs 31. She wasn’t an early riser, though, and hated laundry. That was fine for me, I like quiet in the morning and have no problem helping with household duties. Over the years, she has apologized for not ironing my clothes, etc., but I told her over and over she is not my slave.

When CTBHH was released, she took a renewed interest in this whole helpmeet idea. As a young woman, she had been taught that her identity was wrapped up in her home and children. She could never quite live up to this high expectation, so she felt like a failure. The truth is that no one can. It is an impossible standard that MEN have placed out there for women. Other MEN have found this idea to their liking and crammed it down the throats of women who really did want to please their husbands. From there, it has grown like an infection. So, these planted ideas reared their ugly heads in my wife and she was looking for validation through this book. She honestly tried to follow this crap, but it is not her. Is she perfect? No. But I would rather have her like she is than the robot that is created by CTBHH.

This is not a rant against my believing wife; rather it is an explanation of my experience with this book. I have occasionally picked it up and read some of the ideas in it and am blown away that any woman would stand for this crap. These are the ideas that the wonderful Duggar family lives under.

People who live this stuff every day, though, are usually living a lie. From living in groups of these people, I have found one of two things happens. First, the submissive wife who is perfect in public actually runs everything when at home. She gets the man to do whatever she wants using questions and things she has “learned” in Bible study or books. This is hypocrisy at its worst, feeble-minded men being led around by their wives under the guise of Biblical truths. Second, the totally submissive wife at home as well as in public will have an incredible blow up at least once a year. She will no longer be able to put up with the bullshit she has to deal with daily and finally vent her frustrations. I have seen this happen over and over. One close family friend was actually leaving her husband when she “came to her senses”.

CTBHH is a fascinating read if you want to see what fundamentalists expect of their wives. Thankfully, for all of my mistakes, expecting this behavior from my wife is not one of them. The ideas in this book are what have allowed Jack Hyles, David Hyles and their kind to continue to mentally and sexually abuse women, as well as dominate their husbands

May 2, 2013
Quoting Quiverfull: Mom Has Her Jobs When Not Wacked Out On Psychoactive Drugs?
Next Post

May 2, 2013 Come To Jesus?
Recent Comments
1 Comment | Leave a Comment
Browse Our Archives
get the latest from
Nonreligious
Sign up for our newsletter
POPULAR AT PATHEOS Nonreligious
1