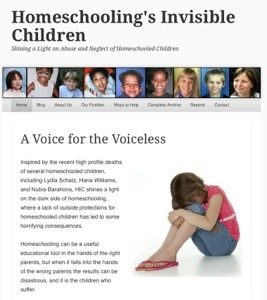 Today I am proud to unveil a collaborative project called Homeschooling’s Invisible Children (HIC). It is a website that collects horrific abuse and neglect cases, including deaths, of children who were homeschooled or whose parents claimed to be homeschooling them. For each case there is a picture, a short description of who was involved and what happened, and the year, date, and state it occurred in. We will add some simple resources and more cases as we build the site and if you have suggestions for those, please feel free to share. Homeschooling’s Invisible Children is a simple project designed to collect all of these cases in one place.

How did this project come about? Well, HIC is actually an idea born out of conversations with my friend Rachel. I’d read some of her research on homeschooling for my capstone paper, and we started talking and I realized she was a former homeschooler too. As we became friends we talked about the abuse that can take place under the cover of homeschooling and I showed her a site I had found called Pound Pup Legacy designed to draw attention to problems in the foster care and adoption system by highlighting horrific cases of abuse and calling for change. She had run across similar things in her research and suggested that we build a site to keep them all in one place. So we built it.

Why are we doing this? We hope that HIC will help people to see the issues and the patterns for themselves. I have said we need better protections for homeschooled children and I can think of no better way to make that clear than to show what can go horribly wrong in homeschooling situations. I hope people will pay attention and a sense of horror will give way to a need for action. Nobody deserves to live and die like Calista Springer did, burned alive while chained to her bed with a dog collar. No girl deserves to be raised being taught that her duty is to bear a child by her own deranged father and then actually be forced to do so. No boy deserves to be locked in a room with blacked out windows and nothing but a bed and a bible for company, starved to two pounds lower than his weight two years prior.

These cases are sickening. They are hard to talk about. They are hard to write about and share and stomach. Sometimes little snippets trigger my PTSD, revive my own memories of abuse and neglect. Mine seem like they were nothing on this level, but the truth is my family could have easily had a child die or if neighbors had called the authorities at the right time we could have ended up on the news too. It’s horrifying to think about and I think that’s why we need to think about it. An intervention helped turn my family around. Nothing turned these families around and the results were horrific.

So if you are able to read stories like this, go check out a few and when people say that there isn’t an abuse problem in homeschooling, feel free to send them over to HIC for a hard look at reality. Maybe, together, we can create some momentum for change.

May 10, 2013
Quoting Quiverfull: Not "Properly" Homeschooling Your Children
Next Post

May 11, 2013 Quoting Quiverfull: Woman, It's STILL Your Fault Maybe?
Recent Comments
2 Comments | Leave a Comment
Browse Our Archives
get the latest from
Nonreligious
Sign up for our newsletter
POPULAR AT PATHEOS Nonreligious
1