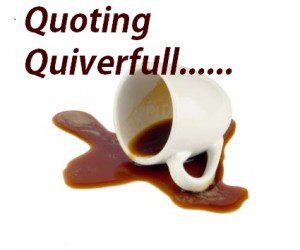 by Doug Wilson from the Real Clear Religion site.

It all began innocently enough. From the beginning, evangelicals did not want to display the fractiousness of the fundamentalists, but they wanted to do this without giving up their faith in all the same foundational doctrines. They were fundamentalists with a happy face. They were fundamentalists with an emphasis on catholicity — and who could be against catholicity? Only bigots, right? But this is where the fatal mistake was made — catholicity is a positive virtue, and coming up with a negatively-stated counterfeit was for the devil the work of a moment. This knock-off catholicity is a lowest-common denominator approach to truth. What is the bare minimum of what we can believe and still be in the evangelical club? Not surprisingly, the size of the truth that is held in common has been dwindling over the decades. But we were told to increase and multiply, not to do fractions.

Just look at what is now up for grabs among those who still (for some reason) identify as evangelicals — biblical inerrancy, the doctrine of the final judgment, same-sex marriage…not to mention the raging controversy in some quarters about the possible ordination of Bella Abzug’s nightgown. We are even falling short of the comparatively low bar set by Kipling — we don’t even believe in the gods of the copybook headings anymore.

So here is another illustration of what deracinated evangelicalism looks like. If any evangelical church starts to describe itself as a “faith community,” it is more likely to be a “shared unbelief community,” quietly assembling for their outward bound pilgrimage to nowhere.

May 23, 2013
Vision Forum & Defending Parental Rights at the Expense of Children
Next Post

May 24, 2013 "Defrauding" or How Men Can Keep Women From Stumbling!
Recent Comments
2 Comments | Leave a Comment
Browse Our Archives
get the latest from
No Longer Quivering
Sign up for our newsletter
POPULAR AT PATHEOS Nonreligious
1

Georgia Teacher Teaches Class In Dalek
Chickamauga, Georgia -  Many schools in the state of Georgia are now...
view all Nonreligious blogs
What Are Your Thoughts?leave a comment
Copyright 2008-2020, Patheos. All rights reserved.