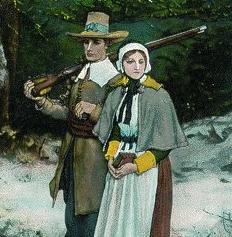 [in quoted portions, bold is my emphasis, italics are hers]

In this chapter, Helen will be laying out her explanation for the kind of love she wants the women who read this book to kindle in their husbands; technically, it’s still a part of what Helen included as the introduction, although it is separated into its own chapter. The picture she paints is very lovely, and something that I initially appreciated was that she used literature. When it comes to describing love, going straight to Longfellow is a fantastic idea.

However, the more I got into the examples she pulled from literature, the more I realized that not only does she not practice honest scholarship when it comes to the text, she starts following a dangerous, deceptive pattern of only showing you exactly what she wants you to see. She doesn’t present this ideal of “celestial love” with a whole lot of integrity.

First, she gives her definition of what celestial love is:

. . . not dutiful, but spontaneous, warm, and tender. When a man truly loves a woman, he experiences a deep feeling within. At times it can be intense, almost like pain. He may feel enchanted and fascinated, with a tender desire to protect and shelter the woman he loves from harm, danger, and difficulty. Then there is the deeper, more spiritual feeling, almost like worship. Even this cannot adequately describe the many-splendored thing called love.

If you take this at face value, this passage is relatively harmless. It sounds pretty enough, romantic enough. Who doesn’t want this sort of love to enrich their marriage? However, this definition becomes anything but harmless as we progress through the book, so I’d like to take a moment and break down some things here.

The level of intensity she describes– it borders on obsessive. Some people do experience love this intensely, and I’m not trying to dismiss or belittle them. However, many men and women just aren’t this crazy intense when they fall in love. For me and my husband, what I have always loved about the way we love each other is that it’s comfortable. Being with Handsome is like swinging in a hammock on a balmy, breezy summer day, listening to the wind in the trees and feeling the sun warm my skin. It’s gentle, and almost placid. When he holds me, I feel safe, not exhilarated.

And this might be reading too much into what she’s saying, but I don’t think so. Here, part of the celestial love she wants women to experience is her husband keeping her from difficulty. Granted, I’m not particularly thrilled when something in my life is difficult. But if my husband took all the difficult things out of my life, I wouldn’t be able to grow as a person. Part of having strong character is meeting challenges head-on, defeating them, and then dancing on their graves.

Anyway, moving on. She starts going into her examples from literature and history. The first one is a quote from  Longfellow’s The Courtship of Miles Standish, specifically when John Alden decides, basically “to hell with it” (it being loyalty to his friend, the promise he’d made, the bone-deep conviction he had that pursuing Priscilla was sinful, and his duty and obligation as a soldier). The quote she pulls is this one, from “V: The Sailing of the Mayflower“

There is no land so sacred, no air so pure and so wholesome,
As is the air she breathes, and the soil that is pressed by her footsteps.
Here for her sake will I stay, and like an invisible presence
Hover around her forever, protecting, supporting her weakness;

Now, that was a beautiful thought expressed by Longfellow. This is literally ground-she-walks-on-air-she-breathes level stuff. However, Helen doesn’t let the reader know that Longfellow has previously described Alden as “rushed like a man insane.” Alden’s love for Priscilla… it really is obsession, and he’s willing to throw away anything he previously believed was important.

Next example: Victor Hugo and Adele Foucher– a relationship she refers to repeatedly through the book. She quotes from his diary where he talks about all the sacrificial ways he would be willing to give of himself to Adele, how much her happiness means to him, that he wants to be the man she can always trust, always depend on.

At this point, I’d like to mention Juliette Drouet, his mistress and traveling companion for fifty years; Leonie Biard, who went to prison when they were discovered while he did not; Alice Ozy, who was in a relationship with his son . . . and many, many others. So, while Victor Hugo was quite a passionate and capable writer, holding him up as an example of “celestial love”– the first time I read this, I laughed so hard I cried.

Her next example is Woodrow Wilson, who was known for his “unemotional schoolmaster” personality. She quotes a letter to his wife where he describes her as “the spring of my content,” and was in general quite elegant and touching. However, she chose Wilson as an example to argue that “every man has the capability . . . if these passions are awakened by the woman.” This argument in unfair and misleading. Every man is his own person, and the way he loves a woman is going to be different. She’s painting this grandiose picture of wild, passionate, worshipful love, and it’s not going to be what every relationship looks like, no matter how healthy it is. What she’s showing us, here, is really as fanciful and unrealistic as a fairy tale or Disney movie.

She rounds out this chapter with two justifications; first, she answers the question “isn’t wanting this kind of love selfish?” She says no, because when you become the woman he can love, and he loves you with celestial love, then he will be a better man for it. So no, it’s not selfish, because the only reason why you’re doing it is for him. Also, you can’t have a healthy family without a happy marriage, so your kids will thank you, too.

She also argues that if you apply what she’s about to teach you, you’ll learn to see his “finer side,” and you’ll love him more because of it. This is an argument that she returns to frequently, and while it starts off . . . ok . . . here, it becomes troubling, because she directly tells women to just stop worrying about their husband’s less-than-stellar qualities (like verbal and emotional abuse, for example).

Her motivation, all in all, isn’t a bad one. She wants women to experience romantic, passionate love, and that’s fine. That doesn’t really bother me all that much, except for the reality that the kind of love she describes isn’t something that every single last relationship should look like, and burdening women with this idea that any other kind of love is like weeds, crumbs, and hell, is . . . well, cruel.

July 1, 2013 Quoting Quiverfull: Battle Then Rest?
Recent Comments
4 Comments | Leave a Comment
Browse Our Archives
get the latest from
Nonreligious
Sign up for our newsletter
POPULAR AT PATHEOS Nonreligious
1