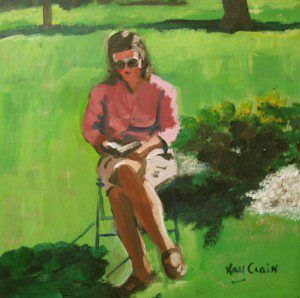 by Mari cross posted from  her blog Mari’s Muses

The other day, a friend of mine was telling me about a conversation she was having with someone who had never had spiritual experiences similar to her own.

It was all fine and everything, but then she blurted out, “I guess I’m not as bold as you are.”

And I said, “What? Bold? Me? What are you talking about?”

The only time I ever say anything is in writing. That doesn’t exactly add up to boldness.

In fact, mostly when I’m in social settings, I try to slip away as soon as I can because if I talk to anybody, I feel like I’m being too bold and over the top.

I think it’s safe to say that I am not really that bold.

My friend went on to remind me of an incident that occurred about 3 years ago.

I lived around the corner and down the street a little from a public playground/outdoor event area. There were concerts every week during the summer and sometimes churches had outdoor church services there. The college theater department also did a play there every year. The Munchkin loved to play over there, so her mama and I would go there and watch her play.

One day, I was so done sitting around by myself, so I decided to go to the park. I knew it was concert day, but it was quite a while before the concert was going to start. I grabbed my bag which always had a book or 5 in it for cases like this where I was going to be alone in a crowd and needed something to distract me from the fact that I was surrounded by a gajillion people who didn’t care that I was there, and I headed over to the park.

When I got to the park, I selected a shady spot to sit and wait. I took my Bible out of my purse and I began to read.

I remember that day very distinctly. I was reading from the book of Isaiah, which I find to be a comforting and beautiful part of the scriptures. My friend found me sitting under the shade of the enormous tree at the edge of the park, and she immediately introduced me to the woman who was with her. (My friend, obviously, makes friends very quickly and easily– I say “obviously” because she’s friends with me and I’m not much for making friends.) This woman took one look at me and said, “Are you reading a Bible? In the park? Well bless your heart….”

And I thought, “My heart is blessed, lady. If it wasn’t, I wouldn’t be reading the Bible in the first place.”

I didn’t think much about this interaction again until my friend brought it up the other day.

Because, I’m used to the kind of boldness where people proclaim in public that everybody is going to hell. Yes, I know people personally who do that. (Going back to the making friends thing, I do not consider those particular people my friends. They’ve told me too many times that I’m going to hell for the relationship to really progress much past “Hi, I’m John T. Baptist and you’re going to hell.”)

My friend said, “Well, yeah. Have you ever seen anybody else read a Bible in the park?”

Well, no — but that could be because I am not known for having stellar observational skills.

My friend said, “It’s just really bold. A lot of times, people don’t like to admit they read the Bible in private, so they’re definitely not going to do it in public.”

I got to thinking about that day and the things that were going on in my life at the time. By then, I had lost every friend I had (with the exception of the one who introduced me to her friend that day in the park), and I was used to doing social things and ending up sitting in a corner and everyone ignoring me. It had been going on like that for years. So when an opportunity to attend a social event arose, I was all gung-ho to attend — but I was going to go prepared. Bring a book. Any book. It doesn’t hurt so much to be ignored if you don’t act like you want anybody to notice you.

And, God had never ignored me. I felt cherished by God, so when I thought about going into a social setting where I knew I was most likely going to be rejected by the people around me, it brought me a lot of comfort to read the Bible. Perhaps the people around me didn’t like me, want me, or even tolerate my presence, but if I was going to sit in that crowd of haters, dang it, I was going to immerse myself in something that brought me a little comfort and reassurance.

For the record, reading the Bible helped.

To the person looking on from the outside that day, I (apparently) looked pretty bold. But that “boldness” was nothing more than an attempt to shove the broken, hurt pieces into a spot where no one could see them.

I suppose the real reason I don’t see myself as being “bold” is probably because the things I do, I do in an attempt to hide or minimize the pain. It feels like an act. It feels cowardly. It feels horrible.

July 18, 2013 Quoting Quiverfull: The Church's Job is What?
Recent Comments
1 Comment | Leave a Comment
Browse Our Archives
get the latest from
Nonreligious
Sign up for our newsletter
POPULAR AT PATHEOS Nonreligious
1