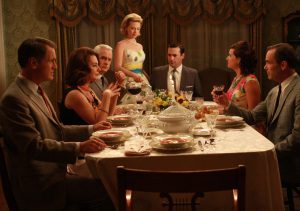 Before I jump into this chapter, I want to make a clarification. I’ve been doing my best to make sure that when I talk about my marriage that I make it clear that what I’ve experienced and witnessed personally in my life is limited to my experience only, that I’m only making observations that I’m comfortable viewing as generally true about people. These statements are in line with my core values about marriage: that I am not married to a man, I am married to a person. He is a human being that is different and unique, and deserves to be treated with respect to his individuality instead of viewing of him in terms of stereotypically masculine constructs.

However, I should make it clear that I’ve been married for six months, and that means there are certain limitations to my perspective because of my youth. That is not necessarily true for my readers, many who have been in relationships or married for years, and I’m going to be honest and say that I’m relying on you to temper my inexperience. So thank you for that, and for the things I know I’m going to learn from you as we discuss Fascinating Womanhood. The conversation we can have about this book is honestly more important to me than my review of it.

Ok, with that being said, I’m going to tackle this chapter, which serves as an introduction to the next five. It is titled, you guessed it, “Masculine and Feminine Roles.”

Oh boy. I cringed. And then I avoided reading it again for days. I honestly had serious thoughts about whether or not I even wanted to write this post, or if I just wanted to skip this chapter entirely. Unfortunately, the statements that Helen makes here are only reinforced in the rest of the book, so it’s necessary that I give this chapter the attention it deserves.

When I’ve talked about gender roles and gender essentialism on my blog before, I’ve been disparaging, but I’ve never had the opportunity to dissect anything about gender roles, because it’s usually tangential to the post. Today, though, it’s central, so let’s talk about it.

That is probably the most important element to keep in mind when talking about gender roles from a feminist, egalitarian position. This is also a point deeply in contention in Christianity. Complementarians, who are gender essentialists (at least, as far as I can tell. I’ve never found an exception. If you know of any who aren’t, I’d be fascinated), argue the exact opposite. In a nutshell, gender essentialism is the belief that biological and anatomical factors determine gender, and that your gender results in inherent differences that are biblical. Violating these “inherent” differences is typically described as a perversion of God’s design.

Sex and gender, however, are not the same thing. Sex is biology– and even sex is not always a binary. Even biologically speaking, there are people who have the biological and anatomical characteristics of both sexes. Some people are born with XXY chromosomes, instead of just XX (genetically female) or XY (genetically male). Some people are also born as intersex, or with the presence of both sex organs, or with “ambiguous” genitalia.

Gender, however, is about identity. I have not done a lot of research into trans* issues yet, so I will keep this general, but there are people who are born genetically, biologically, and anatomically as one sex, but identify as the other– but this reality is entirely more fluid than I can articulate well. Gender is a sliding scale– not a binary.

However, Western culture has particular ways of establishing a gender binary. Our culture identifies certain behaviors, personality traits, desires, etc, as either “feminine” or “masculine.” Men who have “feminine” behaviors or attitudes are usually demeaned for it, and women who have “masculine” characteristics also receive social punishment– although, generally speaking, this is to a lesser extent. Metrosexual men, or men typically classified as “effeminate” or “gay” receive endless social beatings.

In conservative Christian culture, however, I would posit that the ramifications for women “behaving like men” are probably just as severe. Especially in complementarian, gender essentialist environments.

That is definitely true for women in Helen’s world.

The masculine and feminine roles, clearly defined above, are not merely a result of custom or tradition, but are of divine origin.

First words of the chapter. She certainly doesn’t waste time, does she? She doesn’t even try to cloak what she believes about gender essentialism, which I guess I can appreciate. I don’t think Helen has ever deliberately tried to be deceitful– she uses shady and underhanded tactics and unethical approaches to literature and history, but she presents herself as pretty honest. She’s brutally honest, at times.

Her main argument for why she believes in gender essentialism is pulled from Genesis 3, which I’ve already thoroughly dissected here. In short, using Original Sin, the results of the Fall, and the Curse as your main argument for why women are subservient to men? Not ok, mostly because it’s not consistent with the Gospel. “And he shall have the rule over you” is the Curse. By it’s very nature, it is a description of what human relationships are not supposed to be.

She doesn’t just use the Bible, however, she also turns to history. She talks about “studies” and “science” and “research projects,” however, she never cites any of them, gives any names, any titles, any institutions, nothing. We’re just supposed to accept her presentation of these results as factual, as honest presentations of these studies. Given her habit of twisting literature to suit her purposes, I don’t trust her at all.

Her main thrust is that “gender roles are based on a division of labor,” and then she talks about how everyone is happier when men work outside the home and women work inside of it, and she focuses on medieval history. This is egregiously, factually incorrect. An overwhelming flood of letters, wills, business transactions, literature, and art all depict women as integrally involved in economic arenas “outside the home.” This idea that there was “women’s work” and “men’s work” was primarily present in the nobility, and then, during the Victorian era, in the middle class. Women being able to “work at home” has almost always been a sign of affluence and wealth. Complementarians, in my experience, have the unfortunate habit of completely dismissing the realities of poverty from history and bathing the roles of the nobility and the middle class in a rosy glow.

I’m going to save my dissection of the guide, protector, and provider descriptions for later, since Helen dedicates an entire chapter to each one. Trust me, it’s going to be a barrel of monkeys’ worth of fun. The one element here I’d like to highlight, however, is a factor that Helen is going to use as a key component through the rest of the book. This concept will appear as one of the basic assumptions in virtually everything Helen talks about from this point forward:

At this point in the book, Helen presents this concept as “men need to excel women in their masculine roles of guide, protector, and provider,” but as the book progresses, she becomes increasingly more forceful about this idea, and occasionally, it approaches the boundaries of ridiculousness and sanity. Her emphasis on “men must always excel women” becomes all-encompassing until it’s a caricature, and clownish. I’m not even kidding about this. It makes me want to laugh, cry, break things, and go on rampages.

Another justification she gives for men and women adhering to her gender roles is because of children:

If children are to develop their sexual nature, they need strong masculine and feminine images to pattern from. The mother demonstrates the feminine image . . . as she moves about the house in feminine clothes, tending to her domestic work, tenderly caring for her children and nursing her baby  . . .

When this is not so, when there is a blurring of roles it can lead to problems. Much homosexuality is traced to homes which have a blurring of roles. The girls and boys from these homes have not had a sexual image to pattern from. This has denied them normal sexual development . . .

Nothing is more important than a boy becoming a masculine man and a girl becoming a feminine woman.

Oh, yes. She went there.

Adhere to gender essentiallism, or your children will become homosexuals, and we all know what a horrifying, terrible fate that is.

Just in case you missed it, that is what blatant bigotry and homophobia looks like.

She also bemoans the state of the world today, which could either be 1965, or 1980 when she released a major overhaul of the book. In the section “Failures of Society,” she talks about how women have “invaded” the mans’ world, and that, “at home it is just as bad,” and all of this has resulted in tension, worry, and loss of serenity.

As much as Helen assigns men and women to their spheres, she makes it clear almost any time she talks about it that, even inside of the home, even in her domestic responsibilities, not even then does a woman really have any kind of authority.  She says that “even at home it is just as bad. The woman takes control and tries to run things her way.”

So, if you’re a woman, nothing is more important than to “demonstrate a feminine image,” which she clearly lays out in three words: you’re a wife, you’re a mother, you’re a homemaker. And that’s it.

July 30, 2013
Quoting Quiverfull: Fathers Responsible For Kids Getting Into Heaven?
Next Post

July 31, 2013 Quoting Quiverfull: Damaged Goods?
Recent Comments
5 Comments | Leave a Comment
"This is late, partly bc of my preoccupation and partly bc I'd been slowly reading ..."
Jennifer Serena’s Serenity – Luxury Hotel, Birthing ..."
"Thank you for your commitment to truth and love, Suzanne. Best wishes to you and ..."
Meredith Anne Not a Goodbye, More of a ..."
"For what it's worth, I've learned a lot from you about a Very Creepy movement ..."
Gwen Pryce Not a Goodbye, More of a ..."
"Unfortunately, this kind of satire (if it even is satire) is what gives Christianity the ..."
Emily Is Biblical Gender Roles a Big ..."
Browse Our Archives
get the latest from
Nonreligious
Sign up for our newsletter
POPULAR AT PATHEOS Nonreligious
1