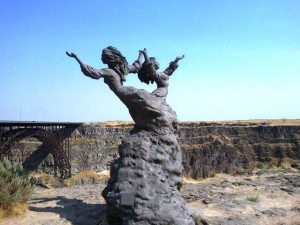 by AJ cross posted from her blog I am Phoenix

The other day, I saw an ad for a TV show where a group of Amish young people were set loose in NYC. I laughed because I knew what they were going through. I’ve lived through a similar experience, except there weren’t cameras following my every move. I grew up in a cult that was similar to Amish or Mennonite homes, but it wasn’t wholesome and pure. It was a guise of Christianity submerged in oppressive patriarchy where the females were abused on a regular basis. But nobody knew because on the outside we looked so goody two shoes and perfect, and because we were too afraid to tell people.

But now that I’m adult, I feel quite free to speak up. It is one of my life’s missions to speak up for those who have no voice. But where do I begin?

Here are a few choice doozies that were foundational in the religion:

– I had no rights in my life, and that to think that I had any rights was prideful and arrogant. All women and children had no rights. You were taught how to “lay down” your rights, and what judgment you’d receive if you didn’t.

– Women were supposed to be, above all, obedient. A good, obedient female didn’t question male authority, shut their brains off, stayed at home uneducated, and had no contact with the outside world.

– A Christian man could say or do whatever he wanted with me and any woman, because as a man, he was naturally a vessel of God.

– A Christian man’s responsibility was to administer God’s judgment as he saw fit, with no supervision and without answering to anyone. He is above reproach. Any kind of abuse at the hands of a man was accepted, but since it was done in the name of God, it was OK. The women and children didn’t know it was abuse because of the glossy names it was given in sermons, and because we weren’t allowed outside contact with the world.

– If a woman or child spoke up or asked questions, they would be bullied by the men and shamed by the other women. If a woman continued to stand up to a man, a man would be within his right to pray for God to alternately curse or her or bring death upon her.

– A woman had to be under a man’s complete supervision and control at all times in her life, whether this was under her father or her husband. To be out from under this ‘protection’ was an invitation for an attack from Satan.

– If you left the religion or committed sins that you didn’t repent for, you would be shunned in various stages. The family would distance themselves from you, stop calling and visiting. They would tell you that Satan would attack you, God would stop hearing your prayers, and God would withhold his blessings from you. God would also bring physical illness, mental illness, or financial ruin to you until you came back to the fold and repented

– A woman’s body is evil, and it must be covered from neck to ankle at all times in shapeless, bulky clothing. It is not a man’s fault if he looks at a woman and is drawn into sin. It is the woman’s fault because she showed a little leg, or a flash of anything. Men would be innocent if only women dressed in burlap sacks like they are supposed to.

I believed that life was meant to be dark and colorless, depressing and full of fear. I was incredibly afraid of my father and his abuse, and was stuck in a state of fight or flight since age 5. My parents had six children because they were supposed to have a full quiver of arrows. They wanted to follow every rule in the religion perfectly, even though my father hated children, and us in particular.

I made my escape from my parents’ house not long after college and moved a good three hours from them. Then I moved to another state and was so happy to be away. Then I became sick and had to move back home. I thought I would go home to open arms, since I was sick. Not the case. They closed their doors to me and said God was judging me for my sinful life, and who were they to cross God and risk his judgment for helping me? I was shocked and for the first time in my life, I considered that possibly what I had suspected all along was true. Maybe my parents’ religion wasn’t from God after all.

After that shake up, I started to question my beliefs. It was extremely painful for me to go back and face the things I had grown up believing my whole life, things that were my foundation and made me who I was, or so I thought. But finally, the blinders fell off my eyes, and when they did, I was so unaccountably happy, that I felt like I was walking on air. To this day, I still feel so light and free… and happy. Kinks in my life are straightening out, and I feel like a little child full of energy with unlimited dreams that I know are coming true even as I speak. Life is full of color now!

My blog here is the story of my transformation, full of hope and positivity. I was excited to put my story out there, but soon found that not many people could relate to the isolated experiences I went through. So imagine my pleasant surprise when I recently found out that there is a whole network of females out there who have broken free from spiritually abusive families.

If you are curious about the hidden lives behind patriarchal abuse, this site is a great place to start:

It’s a shock that in today’s day and age, even here in the US, there are subversive groups like this that bind women in these primitive ways. And still more surprising that most women in these situations have no clue that what they are experiencing is not normal. Or they realize it is abusive, but they develop Stockholm Syndrome and don’t want to leave. Or worse yet, they believe they are honoring God by staying. The dynamics in play behind the closed doors in these cults are fascinating, but even more fascinating are the stories of the women who got away.

The links below take you to the blogs and stories of women who have broken free from the abuse of patriarchal cults. Even though I haven’t yet met these women, I feel like they are my sisters and am so glad they’ve found their voices.

The Phoenix and the Olive Branch – Sierra

Baptist Taliban and Beyond – Cindy Foster

Dispelled: One Girl’s Journey in a Homeschool Cult – Chandra Bernat

Read everything by AJ!

AJ was raised in a spiritually abusive cult based on the teachings of ATI’s Bill Gothard. She has five siblings. After enough time AJ developed Chronic Fatigue, Adrenal Burnout and PTSD from the stress of her childhood. Her parents refused to help her in her ongoing health battle. She is married to a man that has recently emerged from spiritually abusive religion and together they are healing and moving towards daily joy! She blogs at I Am Phoenix

July 21, 2013 Changes That Heal
Recent Comments
0 | Leave a Comment
Browse Our Archives
get the latest from
Nonreligious
Sign up for our newsletter
POPULAR AT PATHEOS Nonreligious
1