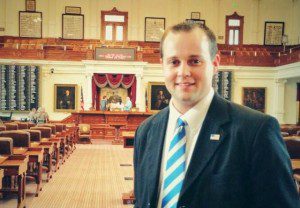 Recently Josh Duggar gave a radio interview in which he claimed that his lesbian aunt is opposed to gay marriage. He took the place of  FRC’s Tony Perkins on FRC’s radio show last week.

“I have an aunt who has chosen to live that life and I love my aunt. I think she is an amazing person,” said Josh. ”It’s not about equal rights, when we’re talking about policy, when we’re talking about these things, it’s really about special rights, a lot of these people want. And my aunt is one who has told me that she is not for all these measures that are being pushed when it comes to marriage and things. She believes that marriage is between one man and one woman,”

Josh fits in well at FRC (and Washington DC lawmakers) with his ability to make bullshit mountains out of molehills. He went on to claim that he was in “auto industry for a number of years”(non-Evangelical Christian translation: owned a used car lot in a small Southern berg) and that he’d engaged in business with people living the “homosexual lifestyle” (non-Evangelical Christian translation: openly gay people and others who may or may not have actually been gay but were perceived as gay by the homophobes of Tontitown and there about.)

I wonder if his aunt has denied being in favor of gay marriage just to avoid the inevitable lecturing that would emerge out of the Duggars about Biblical Marriage. If I was in her shoes I’d have to avoid them and hide my real views when they were around.

August 21, 2013
Quoting Quiverfull: Godly Seed Matters The Most?
Next Post

Nonreligious
Is Jim Bob Duggar and His 'Ministry' Approaching...
No Longer Quivering