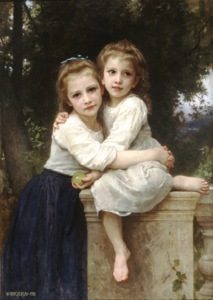 by Heather Doney cross posted from her blog Becoming Worldly

(Editor’s note: This is the final post in the Voices of Sister-Moms series. You can read more of Mary’s story over at Homeschoolers Anonymous)

So I’ve been reading the articles this last week about the sister-moms and they have been hitting home.

I am one of those sister-moms.

I am the 2nd oldest of eight and the oldest girl.  Most of the time I felt like the oldest because my older brother wasn’t in the picture much for various reasons.  But anyway, in the Quiverfull movement, there is a world of difference being a boy in the family versus a girl.  I don’t really feel like going into my story in this document, especially as it is already posted on HA.

This is about another frustration that arises from my position in our family.

As I was growing up, I got very used to hearing remarks and jokes about how many children we ourselves would have when we grew up.  Some people would sit down and start doing the “if all 8 of you have 8 children” equations. Then they would start joking about what family reunions would look like.

We didn’t go to a conservative church. In fact, for most of my younger years, we were the only home schooled family. As far as I know there was never another family as large as ours. Because of that, the jokes ran all the time.

My parents relished in the attention and would laugh right along with everyone.

For me, however, I seemed to be getting some very clear messages: First, everyone expected me to have a large family (and why wouldn’t I when I was “so good with children and would make such a good mother”?). Second, I would be a failure if I didn’t have a big family — but also a joke if I did.  When anyone would ask me while I was in my teens how many kids I wanted, my answer was always what I was taught to say: “as many as God wants.”

I wasn’t allowed to.

I am now a mother and I have 2 amazing children. But I only have 2 and don’t plan on changing that anytime soon — if ever.

The problem is that it seems I will never be able to shake all those jokes and insults from my past.  For example: on my Facebook page on my birthday, there is this one guy that feels the need to always say “Happy birthday” by making some joke about how many more kids I need to “catch up” with my Mom (as if I couldn’t figure that one out on my own).

When I did get pregnant with my oldest, the comments and jokes were merciless. I was working at a Christian bookstore (where I had worked for 5 years) and I knew about 80% of the customers that came in. Many others would recognize me because my family all looks alike and ask if I was a ____ (my family name), notice that I was pregnant and proceed to make a joke.

I would say the incident that hurt the most was when a lady (who I thought I respected) made a comment to my younger sister about how I was such a failure to my parents and was a rebellious child that obviously never learned a thing from my parents growing up.  Why did she say that?

Never mind that she didn’t have a bunch of children and that she had never home schooled herself.  But somehow because I wasn’t doing it, I was rebellious (at 26 years old at that time and married). I have so many more examples that I can’t forget that I wish I could. As a result of all of that, I fled that church as soon as I could. I fled my hometown, too. Right now am on the other side of the country.

So I guess my point is really aimed at “normal” people. Yes, those jokes hurt. No, we (as the children) didn’t have any choice in those things our parents chose.

Please be mindful of that when you speak.

August 25, 2013 Sunday Shout Out Replies: Is It "Sinful" To Take Time For Yourself?
Recent Comments
1 Comment | Leave a Comment
Browse Our Archives
get the latest from
Nonreligious
Sign up for our newsletter
POPULAR AT PATHEOS Nonreligious
1