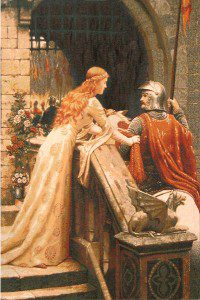 This chapter is devoted to the second “masculine need”: “a man needs to function, feel needed, and excel women as a protector.”

A man being a protector is probably one of the more foundational concepts about men in conservative religious environments– it is most especially true where patriarchy and complementarianism are fiercely held. It appears in a variety of ways, some more subtle than others.

This attitude is actually called benevolent sexism. It differs from hostile sexism in that it usually presents as attempting to be beneficial for women: women are told to stay within patriarchal boundaries, but in return, they will receive benefits, such as protection. Hostile sexism, which is the active belief that women actually are inferior or less capable than men, is less common in American culture (although still present)– but it is very much alive in Helen’s book. This chapter is where Helen crosses the line from benevolent to hostile sexism– and she stays in hostile sexist territory for the majority of the book.

She opens her argument with an appeal to biological differences:

There’s two basic problems with this idea, First off, I’d like to see any man push a seven pound baby out of a space not even four inches across. I don’t think “physical endurance” is something that men have a huge advantage in. Are their muscles attached to their bones differently? Yes. Do their hips tend to be narrower, making them, in general, faster runners? Sure. Is the average man much stronger than the average woman? Most likely.

However, biological differences are not an argument for gender identities. People are people, and who they are, while sex is absolutely a part of that, is independent of sex. Not totally independent, I’m not arguing that, but biological sex is not the magic wand patriarchal and complementarian teachings make it out to be. My biological sex is not the sum total of who I am as a person. My identity is not rooted in the fact that I have a vagina. The sorts of traits, qualities, behaviors, etc., that are attributed to the biological sexes (and there is not just two, by the way) change across civilizations, cultures, and times. Western and American traditional gender roles have never been the universal truth– and treating Western middle-class gender roles (and yes, class and economics has always been a part of gender roles, with the middle class becoming the ideal after the Industrial Revolution) as if they are some sort of biblical absolute? That is a wholly inaccurate misrepresentation of the facts.

Helen moves on to describe the sorts of things women need to be protected from, including “dangers, strenuous work, and difficulties.”

My husband is an INFJ– the Myers-Briggs personality type sometimes referred to as “The Protector.” Taking care of the people he cares about is one of his fundamental motivators, and it’s a quality that I love and deeply appreciate. Because of my background, finding someone who is strongly motivated to make me feel safe is . . . I can’t explain how huge and wonderful that is. He wraps me up in his arms when I have night terrors, and I instantly feel sheltered, and it helps me.

However, I also protect my husband– in a very different way, because I’m a different person. I make sure to do what I can to take care of him the way he takes care of me. I am trustworthy. There are things I shield him from– things that I am quite capable of handling but he is not.

We protect each other. But that’s not how it works in Helen’s world.

In the early history of our country . . . there were dangers everywhere. Savage Indians, wild beasts, and snakes created situations which called for masculine courage, strength, and ability . . .

Today dangers are different, but just as real. Women are in danger of abduction and rape, sometimes followed by brutality and murder. Lesser dangers are vicious dogs, snakes, a high precipice, a deep canyon . . .

There are also unreal dangers . . . women are afraid of such things as strange noises, spiders, mice, and even dark shadows.

Aside from the horrible racism, the stereotypes here are absolutely ridiculous. Wild beasts– men are no more capable of fending off a bear than a woman is. And snakes? Pretty sure I’ve seen men go weak in the knees and pass out in a reptile house at the zoo. Or at the sight of blood. Or a thousand other things. I’ve known men who had a paralyzing fear of spiders. And, really? Women have to be protected from a “high precipice” and a “deep canyon”? This just makes me believe that Helen thinks all women are morons. What’s a canyon going to do– jump around to make you fall into it?

Also, the whole “women are in danger of abduction and rape” thing? It’s based on the idea that the man in your life, the man you trust, is not going to be responsible for raping you. That is grossly inaccurate. According to some studies, up to 96% of all female rapes are committed by men women know. 55% of female rape is committed by intimate partners or husbands.

Also, believing that rape can be prevented if women are protected by their husbands also leads to the idea that women who are raped were only raped because they did something to deserve it. They must have stepped outside their ascribed gender role in some way, and what did they expect was going to happen to them? Sarah Moon has an excellent series discussing this very idea, and I highly recommend it.

But, moving on. The second danger is “strenuous work.” Which just makes me want to pound my head into the wall, because women have been doing strenuous work for centuries, but Helen is either blithely unaware of outright dismissing all credible historical data.

Women need protection from work that is not appropriate for the feminine sex, such as driving a truck, construction work, road work, or anything greasy or masculine. Some types of office work are inappropriate, such as executive jobs, management positions, police work, or political posts.

Many of our jobs in America are divided by gender– there are certain jobs, like cargo transportation and construction, that are identified as being “masculine.” However, one of my best friends is bloody fantastic at putting up drywall. She’s a magnificent beast at dry-walling. One of my friends in college drove a Pepsi truck during the summers to pay for college. These were both “masculine” jobs– and they were fantastic at performing them. I’ve also known men to be incredible receptionists and interior designers. The gender divide in the job market is an unfortunate reality– a reality created by stereotypes and culture.

Also, that last sentence– curses. Women can make excellent CEOs. In fact, the Harvard Business Review recently released a survey that indicates people value traits they identified as “feminine” as being the most highly desired in leadership positions. And women like Wendy Davis and Hilary Clinton are big damn heroes, in my opinion.

Helen continues, rounding out with how men are supposed to protect women from “difficulties”:

Examples are financial entanglements, belligerent creditors, or dealings with people who are harsh, offensive, imposing, or who make unreasonable demands.

What must have her experiences with men and women have been– or even in her own life– that resulted in the opinion that women are incapable of dealing with unreasonable, obnoxious people? It’s rough, but dealing with people you don’t like very much is a fact of life. I have to put up with them all the time. So does everybody else.

Helen isn’t doing any woman any favors by telling them they can only win their husband’s love if they become timid, shrinking people who can’t deal with any sort of problem or “difficulty.” I have met people– both women and men– who were wholly incapable of interacting with reality in a mature, responsible manner. I understand sometimes having to withdraw from something– a confrontation, a trigger, anything. But always being “protected” from any kind of conflict or difficulty whatsoever isn’t possible.

The chapter ends with Helen telling us why chivalry is dead:

In the working world, women are doing the men’s jobs . . . We see women police, steel workers, pilots, and even engineers . . .

If men have an inborn sense of chivalry, why don’t they offer it? The answer is very simple: Men don’t offer their chivalry because women have become capable. They no longer need men.

If chivalry is dead, women have killed it. They have killed it by becoming capable, efficient, and independent, able to kill their own snakes. They prove by their strength and ability that they don’t need masculine care and protection, they they are well able to take care of themselves. They commonly display their capacity to solve their own problems and fight their own battles.

In other words, a woman needs a man like a fish needs a bicycle.

And this is where Helen slides into Hostile Sexist Land. Because women– women who aren’t hysterical harpies and shrews who will never be “truly loved” or experience happiness– aren’t capable. They lack the “capacity” to solve problems. Heavens forbid they’re efficient or independent.

This idea– that women are not allowed to be capable, becomes the battle cry for the rest of the book.