The Intellectual Honesty of Betrothal 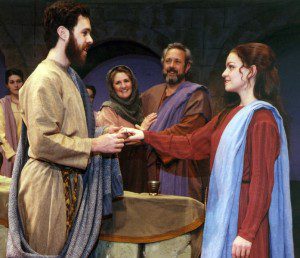 The Intellectual Honesty of Betrothal

Recently, a lot of news has been made about the betrothal announcement between Joshua Ohlman and Laura Camp, who became “betrothed” or engaged at their parents’ wishes after two hours of knowing each other.   Vaughn Ohlman runs “True Love Doesn’t Wait,” a website dedicated to advocating early marriage with no involvement on the part of those actually to be married, save signing rather long “marriage” contracts.

If there is one thing I must grant to Vaughn, it’s this:  He at least accepts the logical conclusions of his beliefs, whereas Vision Forum, ATI, and others, try to soften the inevitable conclusions of where their worldviews lead.  Ultimately, they all argue for the absolute power in a father figure and a draconian “emotional purity,” where having a crush on someone is a great sin.  Who could watch “Return of the Daughters” and not come to the conclusion that Anna and Elizabeth Botkin at least subtly argue for having a father completely decide his daughters’ fates?  Vaughn fully embraces this notion and uses the same pick-and-choose “biblical” reasoning, buzz-words, denominational arrogance, and interpretation framework to come to the conclusions that Doug Phillips and Bill Gothard would be too scared to say as bluntly.

That’s not to say that Vaughn is totally honest, even with himself.  It was with curiosity that I read his e-book, “The Covenant of Betrothal.  Vaughn always argues that we need to look for Scriptural examples for finding spouses.  Throughout the book, the “Sufficiency of Scripture” is emphasized over and over again.  In fact the book is even subtitled “Affirming the Sufficiency of Scripture over the Marriage Process.”  Vaughn constantly reminds his readers that we must use the ENTIRE Bible for figuring out our daily lives in a strictly covenantalist fashion.

I was impressed with Vaughn when I saw that his book actually included a section on “Love, Rape, and Vengeance.”  Very few conservative authors ever address this topic in their courtship arguments.  I was very interested in seeing what his take would be on Deuteronomy 22:28-29, where Moses said that a raped woman should be married to her rapist.  Since this chapter of the Bible is referenced at least eight times in Vaughn’s book, I figured that Vaughn considered it to be very authoritative to the modern-day Christian.  In fact, most of the modern betrothal and courtship movement, including Doug Philips and Bill Gothard, is built around this chapter.

To my surprise, there was nothing in the “Rape” section regarding these two verses.   Instead, all Vaughn talked about was the story of Tamar and Amnon and the story of Shechem and Hamor, both scriptural examples, yet strangely neither one of which he considered to be given to us as guidance for finding spouses.  The only reference to verses 28-29 is in the “Law” section, where Vaughn simply copied them from the King James Bible without offering any commentary at all.

I would love to ask Vaughn a question.  Say that, heaven forbid, the day before he flew out to “betroth” his son Joshua to his friend’s daughter, Laura, she was checking the mail when a rapist dragged her into the woods and violated her.  Would Vaughn now insist that she should be married to her attacker?  What if it was his daughter was the one who was raped?  Would he write a blog celebrating the “biblical” marriage of the two?  Remember, the betrothal commands and rapist commands were given at the same time to the same people in the same culture.  If Vaughn would argue that they don’t apply while the verses he quotes in his book do, he would be picking and choosing Bible verses to satisfy himself, just as he accuses his adversaries of doing.

Of course, there’s many little areas where Vaughn contracts himself.  He doesn’t want to do anything unless he sees a scriptural precedent for it, yet he makes large references to the symbolism of the wedding rings his son and daughter-in-law exchanged, which aren’t found in the Bible and instead come from pagan cultures, both arguments that he uses against dating.  Vaughn also reports that the bride-to-be’s father would not accept the betrothal until he had talked with and approved of Joshua, even after the rings were bought.  Vaughn shows his cards too much here – what he describes as taking place is basically a vastly accelerated, two-hour courtship, the same thing that he is so opposed to.

Ultimately, Vaughn has the unshakable conviction that Father always knows best and has the best interest of others in mind.  To me, that assertion is almost laughable.  I’ve written about that kind of mindset before and what it leads to in Why Courtship Fails: A Male Perspective.  To use Vaughn’s faulty method of picking out Bible examples to support his points, I’ll remind him of Isaac, Jacob, David, and many others who were very poor leaders in their own households.  Vaughn says absolutely nothing about his son and daughter-in-law’s personalities, interest, or goals, besides having lots of children.  In the end, it sounds like Vaughn’s main criteria for picking a daughter-in-law was being able to find a girl with a father willing to put up with his weirdness.  That’s a pretty shaky foundation for the “lasting heritage” Vaughn hopes to build.

P.S. For anyone who is still confused by Vaughn’s excellent style of writing and sincere heart and has confused good storytelling for doctrinal purity, I would highly recommend the little-known work “The Way of a Man with a Maid” by Robin Phillips.  It is out of print but can be downloaded for free at his website at http://robinphillips.blogspot.com/2006/08/my-book-on-courtship-and-betrothal_30.html .  Robin addresses just about everything Vaughn says with stunning clarity, going as far as to having a discussion with Jewish rabbis over whether or not the Christian Homeschool interpretation of the Old Testament marriage laws is accurate at all.  And I’ll give you a hint: it’s not.

“The Covenant of Betrothal: Affirming the Sufficiency of Scripture over the Marriage Process” By Vaughn Ohlman

Read The Graduate’s experiences with courtship – Why Courtship Fails: A Male Perspective

The Graduate is a young man in his mid twenties who was formerly raised in the ATI lifestyle. Although he appreciates the contributions his parents made toward his education, he now sees how many parts of his previous lifestyle were both unwise and unbiblical. Because his family has left A.T.I., he struggles to connect and relate to the people he grew up with

September 16, 2013
Quoting Quiverfull: Motherhood is a Calling?
Next Post

A Freethinker's Testimony
By James A. Haught Just because you grow up in the Bible...
view all Nonreligious blogs
What Are Your Thoughts?leave a comment
Copyright 2008-2020, Patheos. All rights reserved.