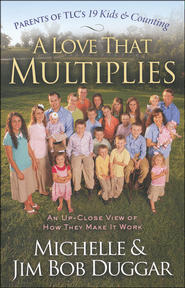 Chapter 1 – Little Eyes Watching: Psalm 127:2 – ‘Lo, children are an heritage of the Lord and the fruit of the is his reward’

The start of this chapter gave me one the biggest laughs I’ve had in a long time. Psalm 127:2 actually reads – ‘It is useless for you to work so hard from early morning until late at night, anxiously working for food to eat; for God gives rest to his loved ones.’

I think what the Duggars were aiming for was Psalm 127:3 It makes me wonder exactly who edited this book. Was it their children? Crackheads on the street? Or just monkeys with keyboards? Freudian slip? How does something that glaringly wrong get through? I even spotted it and I stopped reading and memorizing scripture ages ago.

“We believe that children are a blessing from God”

I think it sort of sets the tone for this chapter. Michelle starts off by explaining how they’d decided to stop all birth control and let the crowd be created followed by cooing about blessings and joys and such having to do with having such a large number of children. Followed by saying how they’ve had hardships like everyone else.

But faith and prayer get them through, no mention of the hefty financial contributions towards their family by The Learning Channel. The same television channel that paid to finish their home, plucked them from obscurity, and an old small three bedroom rental. TLC turned the Duggars into an established money-making brand.

Also the Duggars never mention that money does tend to smooth out many of the bumps in the road. Don’t believe me? Just try living through the crisis of Josie Duggar’s birth and many moons of medical care without having insurance and a serious amount of moolah.

Michelle and Jim Bob say that they wrote this book because of the oodles of emails, letters and questions they get every day, that people from all walks of life like what they see. So the book is supposed to answer those questions and share how they got through 2009 together.

The interesting thing to me about Michelle and Jim Bob answering ‘questions’ about their family, parenting practices et al is that with every different special, series, book released they feel compelled to ‘explain’ away things they have taken public heat for. This is typical for fundamentalists, the fundy must ALWAYS be RIGHT every single time. There’s no self introspection, no learning from anyone else not within their own cultic sphere.

Remember when Michelle Duggar explained during the first television special using Michael Pearl’s discipline method of ‘blanket training’ babies? Swatting a baby with a wooden spoon if it would not stay content on it’s blanket? All mention gone now, edited out along with many other things.

“One of the most frequent comments was that we’d never experienced “real life,” with all its hardships, challenges, setbacks, and pain”

Sure, Michelle and Jim Bob might have experienced “real life” but the Duggar children have been sheltered a ridiculous amount. They’ve never really had to deal any thing harsher than all those kids sharing one bath in their old house. They’re kept away from everything people must learn to deal with in life, like peer pressure, how to handle a plethora of situations that most kids learn early on. I know the Duggar parents think they are helping their kids by sheltering them from anything off the compound but in reality they are delaying the maturation.

No one residing in the Fundigelical world bubble experiences life as most in the world do. They talk the Fundigelical talk, view natural consequences as ‘tests of faith’ from God and often fail to take necessary steps to resolve a challenge until it reaches crisis-proportions.

What they’ve been through with first Josie and later Jubilee has done what terrible things usually do to religious people, make them cling ever tighter to their beliefs.

One thing that is common with everyone going to those type of hard times impacted the Duggars too, it’s made them value their family and home more. They even said they no longer take health for granted, but you’re never know that if you saw their ABC News interview last week. Michelle and Jim Bob both said they are trying for another baby, obviously that last lesson didn’t stick.

October 15, 2013
Quoting Quiverfull: Whatever Happened to 'Be Prepared'?
Next Post

October 16, 2013 Quoting Quiverfull: Embracing Our Wombs?
Recent Comments
27 Comments | Leave a Comment
"This is late, partly bc of my preoccupation and partly bc I'd been slowly reading ..."
Jennifer Serena’s Serenity – Luxury Hotel, Birthing ..."
"Thank you for your commitment to truth and love, Suzanne. Best wishes to you and ..."
Meredith Anne Not a Goodbye, More of a ..."
"For your sake, I am so glad you will no longer be editing and managing ..."
Lana Not a Goodbye, More of a ..."
"For what it's worth, I've learned a lot from you about a Very Creepy movement ..."
Griff Pryce Not a Goodbye, More of a ..."
Browse Our Archives
get the latest from
Nonreligious
Sign up for our newsletter
POPULAR AT PATHEOS Nonreligious
1