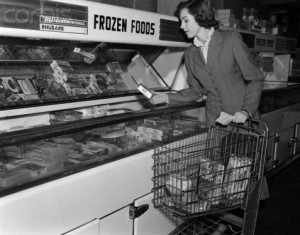 by Samantha Field cross posted from her blog Defeating the Dragons

Occasionally during the course of her book, Helen gives her readers practical, “down-to-earth” level advice. This is one of those chapters, which is dedicated to telling women how they can help their husbands by “developing the womanly art of thrift.”

Like she usually does, she opens up her chapter by appealing to the Bible, which “makes it clear” that it is “the husband’s responsibility to provide the living.” However, also like she usually does, she doesn’t reference any particular passage, just expecting us to know what she’s talking about. However, I can think of a few examples that render this claim completely unfounded:

“The Bible makes clear” Helen? I’m not sure what Bible she’s reading, but it’s not the one I’m pretty sure everyone else in the world has.

But, the biggest thing that bothers me about this chapter is how harshly she divides up people. The way she talks about married couples in this chapter is incredibly divisive. She boxes every single last human being on the planet into what she thinks is “biblical” without any sort of exceptions, without extending grace, without viewing difficult situations with compassion.

She is strictly addressing wives, here, and what she tells them is that they are to be given “allowances” to cover the “household budget”– which does not include anything outside of groceries and clothing. She forbids women from making any sort of purchase– at all– that doesn’t fit inside of “anything in regular demand.” Any kind of need, like furniture or repairs, is to be sought out and paid for only by the husband, and he has “major jurisdiction and final say.” She tells us that we’re not allowed to discuss these sorts of things with him– ever. If we do, we risk emasculating our husbands and “relieving him of his responsibilities” which, somehow results in husbands becoming incapable of handling money wisely.

This actually fits into Helen’s pattern, and is a direct result of how she views communication. To Helen, any possible sort of discussion (“conflict”) is to be avoided at all costs. If a conversation between a husband and a wife could lead to any sort of disagreement whatsoever, she absolutely forbids you from having it. To Helen, a marriage is only “successful” if the two never disagree, and the only way for that to happen is for one person to never have a say. In Helen’s world, that person is always the wife. The fact that one of the biggest sources of conflict in marriages is money (couples who fight over money once a week are 30% more likely to get divorced) has led Helen to believe that husbands and wives must never, ever talk about it. If you never even discuss money, you can’t fight over it, and presto-change-o, happy marriage!

For families in “financial distress” she tells women they they aren’t allowed to go get a job. Instead, we’re supposed to “reduce expenses” and “trim the luxuries” which… gah. The suggestions she makes for how women could do this? Selling their second car. Cancelling vacations. Don’t be tempted by advertisements. Which, in some situations could be perfectly reasonable advice. However, I’m becoming more and more convinced that Helen has never interacted with a poor person in her entire life. People who have two cars and can afford to sell one of them aren’t in financial distress, I’m sorry. Maybe someone who has two cars is living outside of their means, but that is nowhere near the sort of scale many families are facing when 20% of all children go hungry because they live in “very low food security households.” Selling your second car isn’t going to fix that.

And what are we supposed to do when men “make a mess of things”? When they don’t pay the mortgage, or the bills, when they overdraft their accounts?

Let go completely and turn your back on things. Don’t be anxious, checking the books to see if he added right, or is neglecting anything. If he make a mess of things, let him suffer the consequences, no matter what they are. That is the only way he will learn.

I might have thrown the book across the room at that line. Because he’s not the only one suffering consequences when the bank forecloses on your house because he didn’t pay the mortgage. This sort of comment doesn’t even begin to make sense, but she justifies it with “psychology”:

He will begin to feel responsible, to know that if anyone is to worry about the money, it will have to be him. And he will notice your relief, that you are happier. Let him know you are. As he sees you brighter he will try harder to make a go of things, to keep you happy.

Helen doesn’t live on this planet. I’m positive. If she did, she’d realize how ridiculous a statement this is. Sure, some people are motivated by wanting to make the people in their life happy. I’m one of them. But there are plenty of people who couldn’t give a damn, but she doesn’t even acknowledge their existence. This chapter, while Helen has presented it as practical advice, it is almost entirely inapplicable for huge sections of humanity. It is only relevant to the top 20% of all American households, and is wholly incapable of even making sense anyone who doesn’t have the luxury of two cars and a $70,000-a-year income. Helen, here, is displaying an astounding lack of compassion or even awareness that some families really are destitute. Her white, middle-class privilege is pouring out of her, and it’s more that just disappointing.

Helen isn’t alone in this attitude, which is heartbreaking. Many people in conservative evangelical America share the exact same blinders that Helen has on in this chapter. We’ve forgotten that Jesus said “the poor you will always have with you” and that our primary responsibility as the Church is to care for the widows, the orphans, and the poor. We don’t even know they exist anymore. Not really. Oh, we do the Christmas shoebox drives and the book drives and the canned food drives and the backpack drives– one for each season. And then we completely forget about them, except for those four times a year.

October 14, 2013 Quoting Quiverfull: The US is Like Nazi Germany?
Recent Comments
17 Comments | Leave a Comment
"This is late, partly bc of my preoccupation and partly bc I'd been slowly reading ..."
Jennifer Serena’s Serenity – Luxury Hotel, Birthing ..."
"Thank you for your commitment to truth and love, Suzanne. Best wishes to you and ..."
Meredith Anne Not a Goodbye, More of a ..."
"For what it's worth, I've learned a lot from you about a Very Creepy movement ..."
Gwen Pryce Not a Goodbye, More of a ..."
"Unfortunately, this kind of satire (if it even is satire) is what gives Christianity the ..."
Emily Is Biblical Gender Roles a Big ..."
Browse Our Archives
get the latest from
Nonreligious
Sign up for our newsletter
POPULAR AT PATHEOS Nonreligious
1