Self Preservation and Mental Health 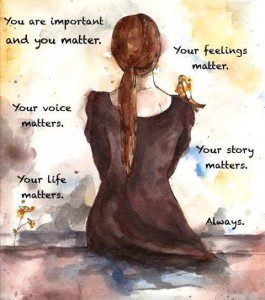 In my last post, I made a brief mention of how living in a state of survival affected my mental health. I thought it would be a good idea to expand on this issue, because in my opinion it is the crux of why having quiverfull families and homeschooling in chaos is abusive to the children involved.

As I have mentioned before, doing something that causes harm to your child is abusive regardless of your intentions or religious justification. Children are do not become raised in a vacuum. Children do not have the ability to protect their own interests, and as I have shown in a previous post, in fact unfortunately do not have the right to do so (http://feministinspiteofthem.blogspot.ca/2013/08/united-nations-convention-on-rights-of.html). Therefore it is a parent’s job to try to protect their children from harm as much as possible – no perfection required – and to introduce good things and reduce negative influences as much as possible. It is my belief that that most parents would not argue with this assertion, because most parents have their children’s best interests in mind.

When a child is raised a quiverfull family, there is core belief involved that stipulates that older children should help raise their younger siblings. This is commonly known to those outside the quiverfull movement as the “buddy system”, but survivors sometimes call this “sister-moms”. The use of older siblings to care for younger siblings can cause various levels of neglect depending on how organized the family is and whether there is homeschooling involved. It is typically simply impossible for a mother of 6 or more children to recover from childbirth and unending pregnancies at the same time as being able to provide adequate care to that many children, provide adequate schooling for that many different grades, cook nutritious meals, do laundry, and keep house. Don’t get me wrong, I do not object to children having chores. I do object to a ten year old child being responsible for a whole department of parenting or housekeeping, such as all cooking, or all laundry or all cleaning or all child care.

This is the difference between a child helping with chores, and “the use” of children to help raise other children or “take over” certain aspects of being a housekeeping mother. When there is a high level of chaos, the older children can become invested in running the household. Indeed, that is the goal of quiverfull families: to pass on the ideals of raising a big family and having women stay in the home and replicate the family values as soon as they are old enough. However, this emotional investment will have one of two outcomes: either the sister-mom will succeed in pulling off an inappropriate amount of responsibility in the home and move on to their own submissive marriage and many children without ever experiencing her own life, or she will fail at the vast amount of work required to raise a family as a young teen. If she succeeds, it is a tragedy.

If she fails – and many fail – she will be subject to shame by others inside and outside the family. The problem is, in order for a daughter to participate in the investment I described above, there is a certain amount of self-deception required. The girl must become oblivious to her own needs and desires, ignore her own sexuality, and truly believe in the moral obligation to participate, to the exclusion of all other life paths. Otherwise she will object to what is being taken from her.

The other important factor apart from self-deception is self-preservation. In a chaotic situation, there is difficulty in maintaining discipline, and some parents do not have the skills to do so with a few children, let alone over half a dozen. Child abuse and “squeaky wheel” parenting is very common, where children are punished for being loud and only receive help when they are insistent enough to get it but not loud enough to warrant punishment. In this type of environment, there is not enough parental supervision to guarantee good behavior, so they may depend on older children to help supervise the younger children. Sometimes this means that if younger children misbehave, the child responsible for watching them may also be punished for not preventing the infraction. When this happens, the goal becomes less about moral behavior and more about each child protecting themselves from punishment.

A sister-mom who has juggled age-inappropriate levels of chores and child care for years, and is responsible for the behavior of others, lives in a haze of survival. They do not let themselves fully absorb what is going on around them, and do not allow themselves to experience the unfairness in their lives. When a failure takes place, the entire facade crumbles down. The girl will realize that the very parts of herself, the very skills she takes pride in, are what makes her different and scarred compared to others the same age. She will realize other girls have something she does not have: an identity outside of someone else’s children and ideology. If a girl fails at being a sister-mom, there is nothing left unless she makes something happen. If you have no other identity and no social skills, building these from scratch as a teenager seems like an insurmountable task.

The process of disillusionment that take place is terrifying and horrifying. Image spending several years working on something you really believed in, and investing every moment of every day in it, and believing that it was your life purpose, and one day it simply falls away. Teenaged girls in this situation are typically quite sheltered as well, and tend to not know much about depression and self-harm, which means that they are exposed to the life-changing effects without understanding what is going on, and believing that they are deficient in some way and are the only one in the world going through those feelings.

Quiverfull families are not open to exploring such issues and seeking help, and such help would be counter-productive to the goals of the idelogy. Sometimes such girls retreat from their moment of clarity back into the haze and try again. Others are given help within the ideological circle, and the girls are encouraged to suppress their feelings. Others leave.

For the ones who leave and start their lives over outside the quiverfull community, it can take years to start to feel normal. It is difficult to feel normal when you are not living the purpose you have been taught, and are no longer pursuing those goals. Another important aspect is that as a sister-mom, a girl will raise children who are not hers. When she leaves, she walks away from small children who she loves and they know her as the source of food and comfort. It is impossible to fully describe the loss this causes, and the unselfish teachings from childhood can make it difficult to move forward with one’s own life when there is a huge part of the soul that is still attached to the raising and protecting of younger siblings.

When a girl starts to open up to her own life, she will start to realize how much of her life has been used up to pursue the goals of someone else. There is resentment towards both the parents and the siblings, which brings with it the conflict of not wanting to resent siblings for what they had no control over. Sister-moms are taught to not pursue their own goals and to malign typical ‘worldly’ goals, and it can be painful to process what is right and wrong and pick a moral code to live by. Sister-moms who leave will often also simply miss their families and feel rejection because they cannot stay and live their lives. They will feel confusion and shame, and be afraid of going to hell for their actions.

They experience the conflict of self-preservation both while living in the haze and while getting out. All these experiences can trigger depression, self-harm, and self-destructive behavior, and when a girl is used to living in a haze of denial, it is very difficult to get out of the new haze of depression if she falls into it. A parent risking a girl’s mental health to get help with child raising other children is abuse.

Read everything by Sarah Henderson!

Sarah lives in Ontario Canada with her husband and works in the social work field. She was raised in a large independent quiverfull family, who traveled from church to church looking for sympathy for their belief system. She left at age 17 to complete high school and university on her own. She blogs at http://feministinspiteofthem.blogspot.ca/

‘Breaking Their Will: Shedding Light on Religious Child
Maltreatment‘ by Janet Heimlich

November 3, 2013
Quoting Quiverfull: The World Aborts the Imperfect?
Next Post

November 4, 2013 Quoting Quiverfull: Distinctly Feminine Fashion?
Recent Comments
2 Comments | Leave a Comment
"This is late, partly bc of my preoccupation and partly bc I'd been slowly reading ..."
Jennifer Serena’s Serenity – Luxury Hotel, Birthing ..."
"Thank you for your commitment to truth and love, Suzanne. Best wishes to you and ..."
Meredith Anne Not a Goodbye, More of a ..."
"For what it's worth, I've learned a lot from you about a Very Creepy movement ..."
Gwen Pryce Not a Goodbye, More of a ..."
"Unfortunately, this kind of satire (if it even is satire) is what gives Christianity the ..."
Emily Is Biblical Gender Roles a Big ..."
Browse Our Archives
get the latest from
Nonreligious
Sign up for our newsletter
POPULAR AT PATHEOS Nonreligious
1